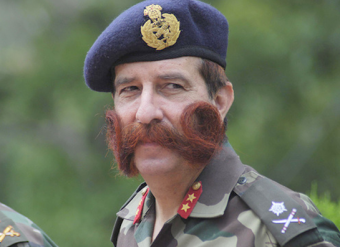 Behold the power of the ‘stache

Today I found out that uniform regulation in the British Army between the years 1860 and 1916 stipulated that every soldier should have a moustache.

The hair of the head will be kept short. The chin and the under lip will be shaved, but not the upper lip…

Although the act of shaving one’s upper lip was trivial in itself, it was considered a breach of discipline. If a soldier were to do this, he faced disciplinary action by his commanding officer which could include imprisonment, an especially unsavory prospect in the Victorian era.

Interestingly, it is during the imperial history of Britain that this seemingly odd uniform requirement emerged.  Initially adopted at the tail end of the 1700s from the French, who also required their soldiers to have facial hair which varied depending on the type of soldier (sappers, infantry, etc.),  this follicular fashion statement was all about virility and aggression. Beard and moustache growth was rampant, especially in India where bare faces were scorned as being juvenile and un-manly, as well as in Arab countries where moustaches and beards were likewise associated with power. It wasn’t all plain sailing for the moustache though; back home British citizens were looking on it as a sign of their boys ‘going native’ and it was nearly stamped out completely.

In 1916, the regulation was dropped and troops were allowed to be clean-shaven again. This was largely because such a superficial requirement was getting ignored in the trenches of WWI, especially as they could sometimes get in the way of a good gas mask seal.  The order to abolish the moustache requirement was signed on October 6, 1916 by General Sir Nevil Macready, who himself hated moustaches and was glad to finally get to shave his off. While no longer in force today, there are still regulations governing moustaches and, if worn, they can grow no further than the upper lip.  It is also still extremely common for British soldiers in Afghanistan to wear beards, as facial hair is still associated with power and authority in many Islamic regions.