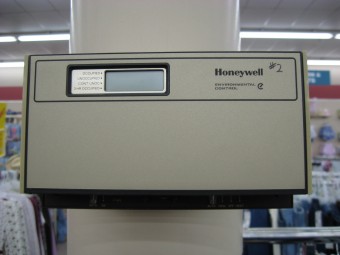 Today I found out thermostat controls in large buildings, such as many office buildings, don’t usually do anything.

These placebo controls for large HVAC systems do nothing but make you think you are adjusting the temperature.  In some cases, the system even includes white noise generators to make you think that the temperature controls are working, when in fact the heating and cooling systems are controlled elsewhere.  According to HVAC specialist Richard Dawson, about 90% of non-secured office thermostats are placebo controls.

These dummy thermostat controls have been used as far back as the 1960s as a response to rising heating costs, which resulted in landlords specifying very specific allowable air temperatures for their tenants.  Allowing office workers to individually adjust temperatures then became inefficacious.

So why install such controls.  Why not just let everybody know the heating and cooling system is centrally controlled and not individually adjustable?  This is primarily to cut down on complaints.  As HVACR engineer Joe Olivieri said, “Thermal Comfort is 90% mental and 10% physical.”

As an example, HVACR worker Greg Perakes says when a particularly employee called and complained about being too hot, “Our solution was to install a pneumatic thermostat. We ran the main air line to it inside of an enclosed I-beam. Then we just attached a short piece of tubing to the branch outlet (terminating inside the I-beam without being attached to any valves, etc.). [She] could adjust her own temperature whenever she felt the need.  Thus enabling her to work more and complain less. When she heard the hissing air coming from inside the I-beam, she felt in control. We never heard another word about the situation from her again. Case solved.”

In another example, Vaughn Langless once installed air and heating systems in an office building, only to be inundated with complaints about the system not working correctly.

Even though we were sure our system was working as it should and maintaining space temps to within one degree to two degrees, we could never completely satisfy the occupants of the space.  We mounted a dummy [thermostat] adjacent to the controlling [thermostat] and gave the floor manager the key to the stat—now the occupants could ‘control’ their space as they desired with the permission of their manager.

The dummy stat did nothing except to give the occupants the impression that they had control of the HVAC system and the psychological effect of having control of their work environment. Our service calls disappeared, and to my knowledge, that system is still set up and working as it has since 1987.”

Modern HVAC systems use thermistors (temperature sensors) strategically located that are then used by a central computer controller that regulates temperature at each location within a narrow allowable range.  Herein lies the only real way for most office workers to adjust temperature in their workspace, by changing the temperature around the thermistors, wherever they happen to be located in the office (often in the air ducts themselves, though sometimes attached to a wall in a protective case).

It should be noted though that manipulating one thermistor by perhaps placing a lamp with an incandescent bulb right next to it to heat it or placing an ice pack over it won’t always work. The computer system that controls the temperature will often use readings from several thermistors in a section of the building to properly regulate temperature.  So if all the other sensors are reading at 70 degrees F and the one you’re placing a heat source near is reading 80 degrees F, it will very likely ignore the 80 degree temperature as a faulty reading, possibly from a defective thermistor.