How to Treat a Jellyfish Sting

You should know how to treat a jellyfish sting.

Contrary to popular belief, you should never urinate on a jellyfish sting. This will just make the problem worse, as does washing the sting with fresh water without prior treatment.  You should also not try to put ice on it before properly treating the area, which is sometimes people’s initial inclination to try to take away some of the pain and swelling.  If you put ice on it, what you’ll actually do is make it worse, which can be serious business in some cases, even causing death, depending on what you were stung by, the extent/location of the sting, and your age (elderly folk and children are much more susceptible to extreme reactions to jelly stings).

Before I get into how to treat a jellyfish sting, it’s first important to understand how jellyfish stings work.  Jellyfish sting you through nematocysts which are released from their tentacles.  Nematocysts are tiny spine covered tubules.  The spines anchor themselves in your skin and when the nematocysts fire, various chemicals are injected into you.  In some cases, you may have thousands of these nematocysts attached to your skin after coming in contact with a jellyfish tentacle, not all of which may fire right away.

When you pee on the sting or try to rinse it with fresh water this changes the tonicity, which in turn can cause the nematocysts to fire, injecting you with even more of the cocktail of chemicals, hence why you shouldn’t do this. 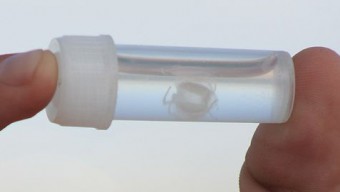 Irukandji are tiny jellyfish, usually not more than 1 cubic centimeter in size, that can be found in the ocean near Australia

While in most cases, jellyfish stings aren’t life threatening, they absolutely can be.  If you happen to know your jellies and you know the sting is from an Irukandji or a box jellyfish, you’ll want to call for emergency medical aid right away.  In extreme cases, box jellyfish stings have been known to kill people in a matter of minutes and anti-venom is needed to stave off the worst of the symptoms, so you’ll not want to wait around to see how the person’s body reacts first.  Also, if the sting covers a large area, for instance more than half of an arm or a leg, or is on the face or genitals, it’s generally a good idea to call for emergency medical aid. 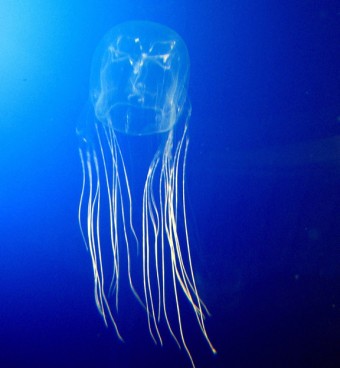 Box Jellyfish, not surprisingly can be recognized by its somewhat cubic shape, rather than domed. They also can move quite fast, as much as 5 mph, rather than just floating along as most jellies do.

In other cases, watch for signs of difficulty breathing, chest pain, difficulty swallowing, the person’s voice changing, loss of consciousness (easiest to spot!), hives, dizziness, irregular heartbeat or other heart symptoms, sudden weakness, nausea, or muscle spasms.  If these signs start to pop up at all or if the person stung is a child or an elderly person, call for emergency medical aid right away.

So now that you’ve either called for medical aid or not depending on the severity of the sting or what did the stinging, how you should treat a jellyfish sting is, first, if a tentacle is still attached, you can choose to either try to remove it immediately or try to deactivate the nematocysts first using the method in the next step, making sure the person stung holds very still while either is being done.  Some guides recommend removing the tentacle first and others say treat the area first.  I’m inclined to go with the first as the tentacle can continue to impart additional nematocysts to the area the longer you’re attempting to treat it, which is particularly serious if you’re alone and having to move around and treat yourself, which will pretty well assure the tentacle will be releasing more nematocysts on you as you move.

To remove the tentacle, use gloves, thick clothing, tweezers, sticks, or the like to very gently detach it from the person being stung.  Basically, just don’t touch the tentacle with your bare skin and try to minimize its movement on the skin of the person being stung.  Also, keep in mind that the nematocysts can stick to your glove or clothing, so after removing the tentacle, you’ll want to throw away the item that came in contact with it to avoid accidentally stinging yourself later.

In order to deactivate the nematocysts, pour vinegar on the area stung for at least 30 seconds, and then, if possible, soak the area for as much as 30 minutes in vinegar.  The acidity of vinegar should neutralize some or all of the unfired nematocysts, specifically neutralizing some of the proteins in the cocktail they shoot into you (though not all types of jelly stings use the same cocktail, so vinegar won’t always work).

Now, it should be noted here that you should not put vinegar directly in your eye, so if an eyeball was stung, instead use a saline solution, such as Artificial Tears, to thoroughly rinse the eye.  If the sting is inside your mouth, gargle and swish around in your mouth a solution of 1 part vinegar to 3 parts water, then spit it out (don’t swallow!).  Repeat this step a few times. 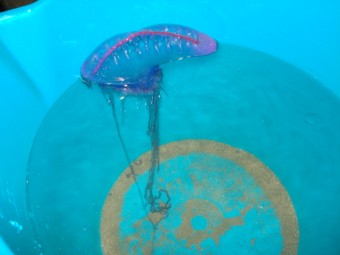 Also, if you were stung by a Man o’ War, vinegar will make their stings worse, so don’t use it in this case, instead, use the next solution.

Next, use a knife, shaving razor, credit card, etc. to very gently “shave” the area stung (don’t use very much pressure or it may cause any non-neutralized nematocysts to fire) to get rid of any remaining nematocysts.  Some guides also recommend gently applying shaving cream or soap lather before shaving the nematocysts off.

Once you’re done shaving the area, re-apply the vinegar or salt water solutions.

Finally, dry the area off as best you can without using too much pressure.  Taking an antihistamine, such as Benadryl, or applying a hydrocortisone cream to the area will help reduce itching and swelling.

In the aftermath, make sure to clean any open sores a few times per day with some type of antibiotic ointment.  Most of the pain from the sting should begin to dissipate within 5-10 minutes of treating it and within 24 hours much of the pain should be gone.  After the nematocysts are removed, ice-packs can help somewhat with the pain and swelling.  However, don’t put the ice packs on before you’re quite sure you’ve gotten rid of the nematocysts.

*Legal Disclaimer: While I am a crack researcher and an insatiable autodidact, I am not a doctor and more importantly I am not your doctor.  This article contains general information about medical conditions and treatments. The information is not advice, and should not be treated as such. You should never delay seeking medical advice, disregard medical advice, or discontinue medical treatment because of information in this article…. There, I’ve covered myself. 🙂