Origin of the Term Layman 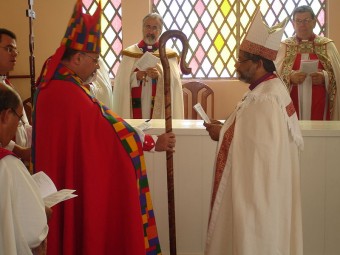 Today I found out the origin of the term layman.

The term layman has today come to mean “a person who does not belong to a particular profession or who is not expert in some field.”  It also has a somewhat less commonly known meaning of “a person who is not a member of the clergy”, which is its original definition. Layman derived from the two existing words “lay” (from the Old French “lai”, meaning “secular”) and “man”, hence the “non-cleric” meaning.

The term layman popped up around the 15th century and within about 100 years the term laywoman also became common.  In both cases, outside the non-cleric definition, they first particularly seemed to refer to people who were not specifically accredited in medicine or law, with the definition broadening from there to include any non-expert in a certain field.

The term “laity” has a similar origin as layman, deriving from the Middle English “laite”, which in turn derives from the French word of the same spelling. The French word “laite” comes from the Latin “laicus”, and finally from the Greek “laikos”, meaning “of the people” or “common” (“laos” meaning “people”).

The exact definition of laity varies slightly based on what religious sect one consults, but in general this word just means people who are not ordained, but belong to a certain religious group.  So, for example, in the Catholic Lumen Gentium, laity is defined as follows:

The term laity is here understood to mean all the faithful except those in holy orders and those in the state of religious life specially approved by the Church. These faithful are by baptism made one body with Christ and are constituted among the People of God; they are in their own way made sharers in the priestly, prophetical, and kingly functions of Christ; and they carry out for their own part the mission of the whole Christian people in the Church and in the world.

Interestingly, the word ‘man’ was originally gender neutral, coming to eventually mean the same as the modern day word “person”, though originally was more accurately defined as “the thinker.” In addition to that, the word “men” used to just mean “to think” or “to have a cognitive mind” and was also considered to be completely gender neutral. It wasn’t until about a thousand years ago that the words man and men started to refer to a specific gender (males) and it wasn’t until the late 20th century that it was almost exclusively used to refer to males.