February 1: Alexander Selkirk is Rescued After Being Stranded on a Deserted Island for Four Years, This is Thought to Have Inspired Daniel Defoe’s Robinson Crusoe 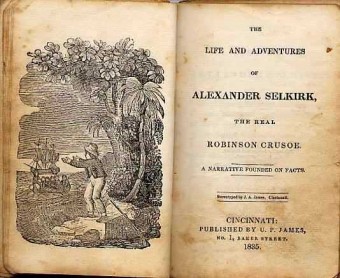 On this day in history, 1709, Scottish sailor Alexander Selkirk was finally rescued from a deserted island he inhabited for over four years.  The island he found himself on was Más a Tierra, the largest island of the Juan Fernández group of islands, around 400 miles west of South America.  Today the island has been re-named to “Robinson Crusoe”.  One of the other islands in that group, around 100 miles west of Robinson Crusoe island, has also been renamed Alejandro Selkirk.

Selkirk, who was serving as a Master Navigator at the time, arrived at the island in October of 1704 aboard a barely sea-worthy vessel, the Cinque Ports, that had been damaged in previous battles with the Spanish and was infested with worms that were eating away at the hull.  The captain had decided to stop at the island to re-stock their supply of fresh water and food stores.  Due to the failing state of their ship, Selkirk refused to get back aboard and tried to convince the others that they should stay and wait for another ship to come along.  Everyone else refused to stay and Selkirk found himself on the island alone.

This may sound like a foolish thing to do, but better stranded on a well stocked island with plenty of fresh water and food sources than on a ship that may sink at any moment in the middle of the ocean.  In fact, this is exactly what happened to the vessel, with most of the remaining 41 members of the crew (they originally had 90 when they first set sail) aboard dying when the Cinque Ports sunk of the coast of Peru shortly thereafter.  Only eight of the crew survived, including the captain.  They managed to swim to a nearby island from where the ship sank, but were subsequently taken captive by Spaniards and were imprisoned where “the Spaniards put them in a close dungeon and used them very barbarously.”  Only the captain made it away from there alive, eventually managing to return to Britain.

Initially, Selkirk thought a ship would pass fairly quickly that he could hitch a ride on.  This obviously didn’t happen.  The supplies he had on hand included a musket, gunpowder, a knife, a Bible, bedding, a few tools, and tobacco.  Lucky for him though, the island provided his necessities, with plenty of fresh water, goats, seals, shellfish, wild turnips, cabbage, etc.  However, the island was also infested with rats.  This became a problem for him when he’d try to sleep, with the rats gnawing at his clothing, bedding, and feet.  He soon found a solution to this problem, as the island also had a large population of cats.  He domesticated many of the cats, providing them regular supplies of food, and the cats took to hanging out around his campsite and sleeping near him, which kept the rats at bay while he slept.

Throughout his time on the island, he lived fairly comfortably.  Initially, he hunted goats using his gun, but when gunpowder ran out, he took to chasing the goats.  All total, he estimated he’d killed about five hundred goats during his time there to use for food and other purposes.  He also began systematically partially maiming young goats so that when they grew older, they wouldn’t be able to run as fast.  His father having been a shoe maker and tanner also helped him out significantly as he knew how to make clothing and the like from the goat skins, which was useful once his own clothing wore out.

While on the island, his life was only threatened twice.  The first time was when he was chasing a goat and subsequently fell off of a cliff.  While he was injured, his injuries may have been even worse except that he managed to land on the goat, who was probably killed on impact. Selkirk himself was knocked unconscious by the fall and did not wake for almost an entire day and according to his account was near senseless for another two days. The second time his life was in danger was when Spanish ships arrived.  He initially thought he might be rescued, but upon realizing the people aboard were Spanish, he fled as they shot at him.  The Spanish chased him throughout the island, but eventually gave up the hunt.  During this time, he hid himself near the top of a very thickly leaved tree for two days.  At one point, he reported a couple of the Spanish sailors, not knowing he was there, peed at the base of the tree.

Finally, on February 1, 1709, two ships, which included famed explorer William Dampier and was led by Woodes Rogers, anchored near the island and Selkirk revealed himself to the crews via a signal fire.  Several of the crew were suffering from scurvy and Selkirk set about supplying them with needed food.  He got so good in the graces of the captain that he was made first mate before they set off, and was given one of the two ships to captain during the remainder of the voyage. A book was subsequently written by Captain Woodes Rogers’, which included the tale of Selkirk: Rogers’ A Cruising Voyage Round the World: First to the South-Sea, thence to the East-Indies, and Homewards by the Cape of Good Hope.  Selkirk himself was also interviewed several times about his adventure and gained a certain amount of notoriety for it throughout England.