Navel Orange Trees are All Clones of Each Other 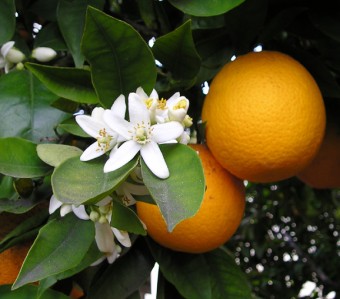 Today I found out navel orange trees are all perfect clones of one another and all originate from a single tree in Brazil.

In 1820, a mutation occurred in a group of sweet orange trees growing on the grounds of a monastery in Bahia, Brazil. The mutation created a seedless orange that was much sweeter than the original citrus fruit. In addition, the new species had an underdeveloped twin orange growing within the same skin of each fully developed orange. From the outside, this growth looked like a human belly button, which resulted in the naming of the newly grown citrus variety: navel oranges.

Since navel oranges are seedless, farmers couldn’t simply grow another tree from the seeds to get more of the fruit. The only way to grow more navel oranges is to amputate a blossoming bud from an existing navel orange tree and unite it with another compatible fruit tree’s trunk or root. This process is called grafting and is only successful if the grafted fruit trees are compatible with one another. Since navel oranges belong to the same species as grapefruits, lemons, and limes, they can be grafted with any of these.

Two years after the discovery of the navel orange tree, Brazil sent a dozen navel orange seedlings to the United States Department of Agriculture (USDA) in Washington DC. Five years later, a woman named Eliza Tibbets planted one of these seedlings at her home in Riverside, California and it started producing fruit. Mrs. Tibbets success growing this fruit spread, and other California orange growers decided to take buds from her tree to grow as well, since the California climate proved perfect for navel oranges. This variety of navel orange became known as the Riverside Orange, but its name was later changed to the Washington Navel Orange and is the most popular type of navel orange in the world.