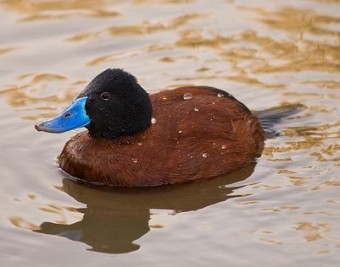 Today I found out that there is a type of duck that sometimes lassos potential mates with its penis to prevent them from getting away.

Most male birds do not have penises. They typically copulate by briefly touching genital openings with a female, called a “cloacal kiss”. However, most ducks do have penises.  The theory behind why this is the case being that, because they are aquatic birds, it is likely that most of the sperm would be washed away after a cloacal kiss.

Chief among ducks, in terms of phallic prowess, is the Argentine Lack Duck (Oxyura vittata), who not only has a penis, but has a penis as long as the duck himself! Not only would this lucky duck get to redefine the game of “just the tip”, but the way it seduces unsuspecting females would make even Ron Jeremy jealous.

Researchers at the University of Alaska theorize that the duck uses its penile advantage to lasso escaping females, in an attempt to mate with them.  In their own words: “Our best guess is that the birds use [the long penis] as a kind of lasso… The males have to chase the females, and even during copulation the females are trying to escape.”

The Argentine lake duck is small, weighing a little more than a pound (640 grams) and around 16 inches (41 centimeters) long from head to tail. It’s a stiff-tail duck and, like many species in the stiff-tail duck family, they have rather long penises compared to their body size. Most of these birds, however, rival human length at approximately 6-8 inches (if you’re lucky!). The Argentine lake duck appears to be an overachiever and can have penises up to 17 inches long, giving them the largest penises of any known bird.

There is very little pair-bonding between the males and females in this species and the female ducks are often resistant to mating. Because of this, the courtship displays to attract females are elaborate, vigorous, and typically performed in the presence of other ducks. Researchers don’t discount the idea that sexual selection (the idea that the females prefer a longer penis) has played a role in the development of the Argentine duck’s very long member. They think it is more likely, though, to be the result of limited access to females, and intense sperm competition. 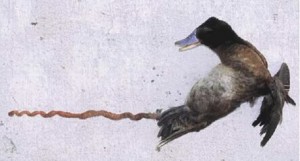 The penis itself is covered with coarse spines, while the tip is soft and brush-like. The researchers think the duck may use the brush-like tip as a sort of cleansing instrument before ejaculation to remove sperm in the female’s oviduct that was deposited by another suitor, thus increasing the mating ducks chances of paternity. Whatever the reason for the brusk-like tip, it’s clear that the term french tickler should now perhaps be renamed to the Argentine tickler!