How a Car’s Rear-View Mirror Works 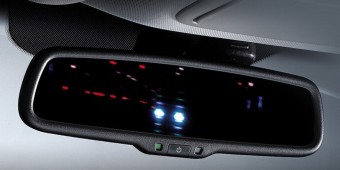 Today I found out how a car’s rear-view mirror works.

Ever wonder what is happening when you flip a rear-view mirror up or down to increase or decrease the amount of glare coming from the vehicle behind you?  I assume if you’re still reading, you have, or at least have nothing better to do at the moment than find out!  In order to accomplish this dimming, less expensive versions of rear-view mirrors have what’s known as a “prismatic wedge shape” to the reflective surface. In more expensive models, electrochromism is used to automatically tint the mirrors surface when it is exposed to increasing light.

Prismatic rear-view mirrors are manually operated using a tab below the mirror.  This allows you to change the reflective surface angle of the light being reflected off it, “day” and “night” mode, if you will.  What’s specifically going on here is the internal mirror actually is ground into something of a wedge shape, when viewed from the side, with the thicker edge at the top and getting thinner as it goes down.  Thus, the rear surface reflects the light coming from a slightly higher object behind you then the front surface.  In order to make the rear surface more reflective, like most mirrors, it is coated with a highly reflective material.

Both the front and rear surfaces actually are reflecting light back at you, regardless of the position.  However, when in the “day” position, the highly reflective back surface of the glass more or less overpowers the weak reflection you get from the front glass surface, both because it’s much more reflective and because it’s reflecting light from out the back of your car, which is often very bright, relative to the inside of the car.  The front surface at this point is just weakly reflecting the light from the back seat of your car.

At night, when you flip the mirror up, the back, highly reflective mirror is reflecting the light off the ceiling of your car, which means it’s reflecting almost no light because the ceiling of your car is typically almost black at this point, which is key for this system to work.  The front glass, on the other hand, at this point is reflecting the bright car lights behind you, so you don’t typically notice the rear surface’s reflections of your ceiling.  You just see the dim reflections off the front glass.

Another method for dimming the rear-view mirror is electrochromism, which allows for automatically adjusting the amount of light reflected by the rear-view mirror.  This is particularly handy in side view mirrors, which don’t typically have another convenient way to dim bright lights behind you.

Electrochromism is a phenomenon that allows materials to change color when different energy levels are applied to them. Modern versions of these systems have photo-detectors mounted on them that sense the amount of light reaching the mirror. When the detectors sense the amount of light reaching the mirror is increasing beyond acceptable levels, an electrical charge is applied to the electrochromatic glass and the light transmission properties of the glass are changed. In effect, this tints the glass allowing less light to be reflected to the driver. Today, the main chemical used in this process is usually Tungsten Trioxide.

Whether a base model Kia Rio that has a manually adjustable version, or a super fancy Jaguar that rubs your feet and talks dirty to you while adjusting the annoying light in your eyes, auto makers are assuring that the glare coming from the police cars lights behind you will not cause you any more distress than absolutely necessary thanks to these two rear-view mirror dimming mechanisms!