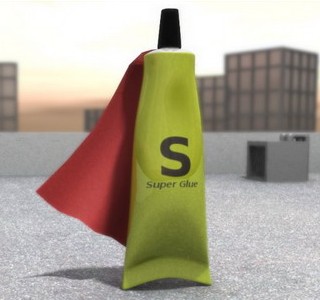 Today I found out Super Glue was invented by accident, twice.

Super Glue, also known as cyanoacrylate, was originally discovered in 1942 by Dr. Harry Coover, who by the way died last month on March 26th, 2011.  Coover was attempting to make clear plastic gun sights to be put on guns used by Allied soldiers in WWII.  One particular formulation he came up with didn’t work well for gun sights, but worked fantastically as an extremely quick bonding adhesive.  Surprisingly, despite the commercial potential of such a product, Coover abandoned that formulation completely as it obviously wasn’t suitable for his current project, being too sticky.

Nine years later, in 1951, now working at Eastman Kodak, Dr. Coover was the supervisor of a project looking at developing a heat resistant acrylate polymer for jet canopies.  Fred Joyner was working on that project and at one point used the rediscovered Super Glue and tested it by spreading ethyl cyanoacrylate between a pair of refractometer prisms.  To his surprise, the prisms became stuck very solidly together.  This time, Coover did not abandoned the cyanoacrylate (Super Glue), rather,  he realized the great potential of a product that would quickly bond to a variety of materials and only needed a little water to activate, which generally is provided in the materials to be bonded themselves.

Super Glue was finally put on the market in 1958 by Eastman Kodak and was called the slightly less catchy name of “Eastman #910”, though they later re-named it “Super Glue”.  Eastman #910 was soon licensed to Loctite who then re-branded it again to a somewhat uninspired name of “Loctite Quick Set 404”. Although, they later developed their own version, calling it “Super Bonder”.  By the 1970s, numerous manufactures of cyanoacrylate glues had popped up, with Eastman Kodak, Loctite, and Permabond accounting for around 3/4 of all “Super Glue” sales.

Note: It should be noted here that while Super Glue was originally invented by accident thanks to WWII, it was not, as a popular urban legend tells, accidentally discovered by soldiers in WWII who then subsequently began using it to seal up battle wounds.  Rather, it was discovered as described above and didn’t hit the public market until well after WWII had ended.

Interestingly though, according to its creator, Dr. Harry Coover, Super Glue actually was used  in the Vietnam War to help close up wounds on soldiers while they were being transported to hospitals to then receive stitches.  Today, a form of cyanoacrylate is often used in place of or in conjunction with traditional sutures.