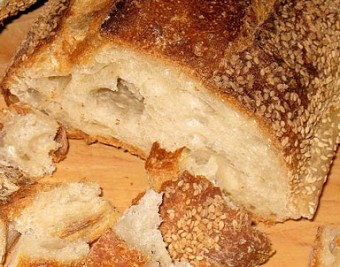 Today I found out bread goes stale about six times faster in the refrigerator then when kept at room temperature.

On the surface, this might seem counter intuitive; after all, everyone knows if you want to keep food fresher longer, you put it in the fridge.  The problem stems from what bread is made out of, specifically starch molecules, and how those starch molecules react in certain conditions.

Before we begin to dissect why bread goes stale faster in the fridge, it’s important to know what bread is actually made of.  Breads are essentially networks of wheat flour protein molecules (called gluten) and starch molecules.  Suspended in this network of molecules is carbon dioxide that is produced by the fermentation of yeast inside the dough. This gives bread its fluffy, foam-like texture.  Begin to play around with the amounts of these ingredients and other fancy tasting additives and you can get many different types of textures and tastes.

The starch inside of this mixture has its own characteristics.  Starch molecules are made of two base components, both are long chain sugar molecules.  Glucose (sugar) is classified as a monosaccharide, meaning one glucose unit. But if you link these units together, they can become a polysaccharide or complex carbohydrate (be afraid Atkins lovers, be very afraid).  The two units are Amylose and Amylopectin. Amylose, which usually consists of about 10,000 sugar units, is built like a narrow bundle of reeds with all its glucose units arranged in straight parallel lines.  Amylopectin, which usually consists of about 20,000 glucose units, have a more tree-shrub like appearance with its glucose units clumped together going in all directions.  Plant starch is typically 20-30% amylose and 70-80% amylopectin.

When heated up in the presence of moisture or water molecules, for instance placing the bread dough in the oven, the starch molecules weaken and allow water molecules to enter, or get in between the chains of the sugar molecules and join with them.  This swells the starch granule and begins to soften it up, making it oh so warm and squishy!  In the case of bread dough, the moisture can come from two sources, either the wheat protein in the bread itself or the water added to the mixture that makes up the dough.  Once cooling begins, the moment you take it out of the oven, the process begins to reverse itself and the starch molecules begin to “dry out” or crystallize and harden again, a process known as retrogradation.  Thus, the slow process that makes croutons what they are begins (thank you Outback Steakhouse, thank you!)  Another example of a similar process in food can be observed by leaving honey uncovered on the counter.  Over time, it would dehydrate and all you would be left with is pure granules of hard white glucose molecules (sugar crystals).