A Group of Cats is Called a ‘Clowder’ 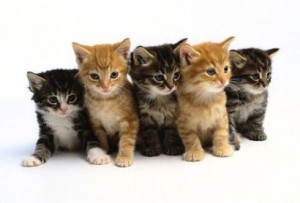 Today I found out that the correct term for referring to a group of cats is ‘clowder’.  Interestingly, there are also two other valid ways to refer to a group of cats, other than just saying “group of cats” or “cats”.  Those other two terms are ‘clutter’ and ‘glaring’.

In addition to this, if one wants to refer to a group of wild cats, the correct terms are ‘dowt’ and ‘destruction’.   A male cat, when neutered, is called a “gib”, when not, is called a “tom”.  Female cats are known as “molly”.

The word “cat” itself derives from the Old English “catt”.  Catt has its source in the Late Latin “catus”, meaning: “domestic cat”.  This Late Latin word probably derives from an Afro-Asiatic word: “kaddîska”, meaning “wild cat”.