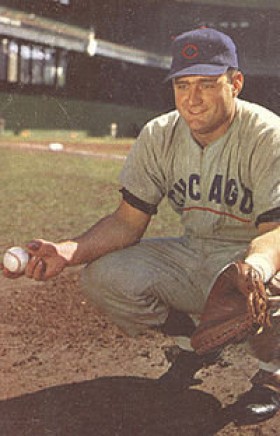 Today I found out there once was a Major League Baseball player that was traded for himself.

That player was Harry Chiti.  Chiti was a catcher who played in the major leagues from 1950-1962, taking two years off in that span to fight in the Korean War.  The momentous event of getting traded for himself happened in 1962 when Chiti was traded from the Indians to the New York Mets, who were an expansion club that year.  Chiti was acquired for a “player to be named later”.  After putting up abysmal numbers in 15 games with the Mets, the Mets traded him back to the Indians as the “player to be named later”, officially making him the only MLB player ever to be traded for himself.

Upon being returned to the Indians, they immediately assigned him to their AAA club where Chiti spent the next two seasons, eventually retiring from baseball after the 1964 season at the age of 30, having never made it back up to the big leagues.

Chiti’s best season by far was in 1959 when he played for the Athletics and in just 55 games posted a 1.4 WAR (wins over replacement level).  He also had another good season in 1952 at the age of 19 when he posted .8 WAR in just 32 games, this time with the Cubs who were the team he spent most of his career with.

Besides those seasons, Chiti was quite awful most of the time and had a career slash line of .238 BA, .294 OBP, and .365 SLG.  For his 11 year career, he managed 2.9 wins over a replacement level player.  Lucky for him, even at that time, as it is today, around replacement level catchers tend to manage to find major league teams that will give them playing time off and on for many years, despite the player’s lack of ability.