The First Speeding Infraction in the U.S. was Committed by a New York City Taxi Driver in an Electric Car on May 20, 1899 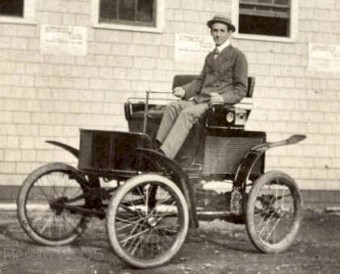 Today I found out the first speeding infraction in the U.S. was committed by a New York City taxi driver in an electric car on May 20, 1899.  The driver was Jacob German who drove for the Electric Vehicle Company, which leased its electric taxicabs to be used around New York.

German was driving his taxi at a blistering 12 miles per hour down Lexington Street in Manhattan.  At that time, the speed limit was 8 miles per hour on straight-a-ways and 4 miles per hour when turning.  A police officer on a bicycle observed the 26 year old Mr. German speeding and promptly arrested him and imprisoned him in the East 22nd Street station house.

There is some contention on whether he actually received a paper ticket or not, which would have also made him the first person in the U.S. to receive an actual physical ticket, as opposed to just being the first to be cited for committing a speeding infraction.

The general consensus seems to be that he did not receive an actual ticket and, rather, the first known paper speeding ticket issued to a driver in the United States was to one Harry Myers in Dayton Ohio in 1904. Mr. Myers was also traveling 12 miles per hour when the police observed him speeding.  In his case though, he wasn’t arrested, but was just issued a ticket.

Outside of the United States, the first known speeding infraction is thought to have been committed in Great Britain on January 28, 1896, around three years before Jacob German was arrested for speeding.  This infraction was committed by Walter Arnold of East Peckham, Kent.  Mr. Arnold was traveling in a 2 mph zone (yes, 2 mph) and was going a breakneck 8 mph.  The fine he received was for 1 shilling.