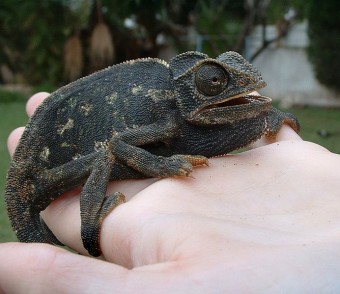 Chameleons don’t change color to match their environment. Rather, they change color as a response to mood, temperature, health, communication, and light.

Now, not all kinds of chameleons have the ability to change color and some only have limited ability for color changing; for instance, many types of chameleons can only turn, green, brown, or gray. Others have the ability to change to a variety of different colors including: pink, blue, red, orange, green, black, brown, blue, yellow, turquoise, and purple. Of the ones that can change color, they’ll often change to darker shades, when they are cold, and will lie out in the sun during this time. Likewise, if they are hot, they can change to lighter colors which will reflect the sun better, helping to cool themselves off.

Most color changes though are simply due to mood changes or for communication purposes. For instance, the Panther Chameleon will change to red and yellow when they are angry or are getting ready to attack. This serves as a warning to other chameleons and humans to back off. Some types of male chameleons will also change to mixed bright colors when they are trying to attract a nearby female chameleon.