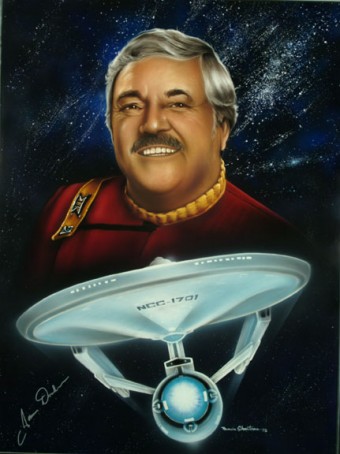 Today I found out the actor who played “Scotty” on Star Trek, James Doohan, was shot six times storming Juno beach on D-Day.

Doohan, a Canadian, after leading his men through a mine field on Juno beach and personally taking out two German snipers in the process, eventually took four rounds in one of his legs; one in his hand, which ultimately resulted in him losing his middle finger; and one in the chest.  The shot to the chest likely would have been fatal except that he had a silver cigarette case there, given to him by his brother, which deflected the bullet.  He would later give up smoking, but at least he could say that being a smoker actually saved his life.

Ironically, the shots he took were not fired by the enemy, but rather by an overzealous Canadian gunman.  After his unit was secured in their position for the night, Doohan was crossing between command posts, when a Canadian gunman spotted him and opened fire.