Ben & Jerry’s Was Originally Going to Be a Bagel Company 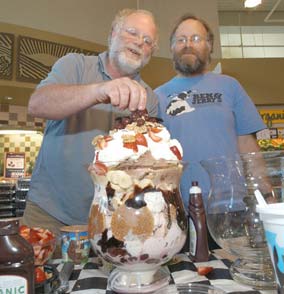 Today I found out Ben & Jerry’s was originally going to be a bagel company.

Ben Cohen and Jerry Greenfield ended up changing their minds when they found out how much it would cost to get all the needed equipment for making bagels.  Instead, in 1978, they both took a $5 correspondence course from Pennsylvania State University on ice cream making.  They then took $12,000, $4000 of which was borrowed, and converted an old gas station in Burlington, Vermont into an ice cream parlor called Ben & Jerry’s Homemade.

Before opening the ice cream shop, Jerry Greenfield was a lab technician, in New York, who tried three times to get into medical school, failing each time.  Ben Cohen attended various colleges, eventually dropping out and settling on working as a crafts teacher for emotionally disturbed children in New York.

In New York, Ben and his old friend from Jr. High and High school, Jerry Greenfield, shared an apartment in Manhattan before once again parting ways.  Eventually, the two reunited and deciding to start some sort of a food company, eventually settling on ice cream, hoping to find something that was “more fun” than their current jobs.

By 1983, just five years after they first opened their doors, Ben & Jerry’s products, at their own retail stores and sold through various other outlets, had gross sales of around $2 million.  Just one year later, they achieved a gross of over $4 million.  One year after that, they were grossing $9 million.  One year after that, in 1986, they grossed over $20 million.  In 1987, they finally broke their amazing “doubling” streak and only grossed $32 million. The following year, their rapid growth caused President Ronald Reagan to award the two the “U.S. Small Business Persons of the Year”.

In April of 2000, a mere 22 years after Ben & Jerry’s Homemade Inc. was founded, the two sold the now publicly traded company for $326 million to the British-Dutch food company Unilever.  At the time, annual sales were just shy of $200 million. Today, Ben & Jerry’s ice cream receives annual sales of around $240 million.