Why the Moon Looks Bigger on the Horizon 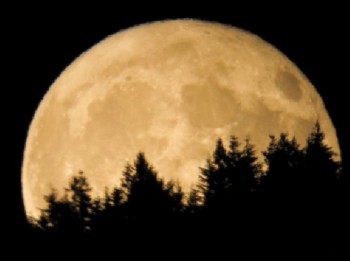 Today I found out why the Moon looks bigger on the horizon than when it is higher in the sky.

This is a question that has been debated for several thousand years.  One popular myth, dating all the way back to Aristotle in the 4th century BC and which still endures somewhat today, is that it is simply a case of magnification caused by the Earth’s atmosphere.  While a “magnification” effect is taking place, it actually is going the other way and is more of a compression.  Atmospheric refraction causes the Moon to appear very slightly smaller in the vertical axis when it is near the horizon vs. when it is high in the sky.   This refraction, combined with the fact that the Moon is about 4000  miles further away when it is on the horizon, causes it to appear 1.5% smaller if you were to measure very precisely its apparent size on the horizon vs. higher in the sky.

So if it’s not magnification from the Earth’s atmosphere, what is going on here? In short, the Moon appearing bigger near the horizon is nothing more than an optical illusion.  It’s really as simple as that.  You can verify this fact by taking a pair of calipers or even just a ruler and measure the diameter of the Moon on the horizon; later that night, when it is higher in the sky, measure it again. (Be sure and hold the measuring device at the same length away from your eyes each time to get accurate results.)  If you do it precisely enough, you’ll find that it actually will measure about the same size both times, despite appearing nearly twice as big to your brain when it is on the horizon.

Exactly what is going on in our brains to cause this optical illusion is still somewhat up for debate, but it seems to center around size consistency, where our brains are trying to grapple with the size of an object vs. how far away it thinks it is. For instance, when you see someone very far away from you and their head looks incredibly tiny, your brain doesn’t for an instant think that the person and their head is actually tiny.  It adjusts your perception based on what else is in your vision to gather that third dimension of depth.

Something of this same effect is thought to be happening with the Moon, only this time your brain is getting tricked into thinking that the Moon is further away when it is on the horizon, making it appear bigger to you.  This is known as a Ponzo Illusion, named after Italian psychologist Mario Ponzo. 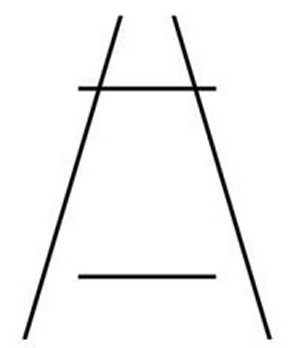 Ponzo Illusion: The two horizontal lines in this image are the exact same length.