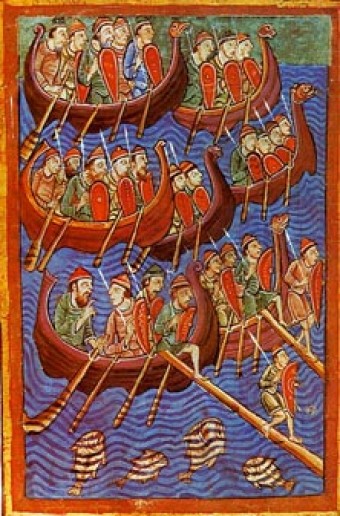 To date, there is no evidence that any Viking warrior wore a horned helmet and there is significant evidence that they didn’t wear such impractical headgear. So how did this myth get started?

A probable source is found in romanticized versions of the Vikings appearing around the mid17th century to 18th century, and popularized in the 19th century. In these works, the Vikings were often depicted as violent adventurers who wore winged or horned helmets. It is thought that early romantic artists and writers depicting them as such were going off of ancient Greek and Roman texts, which describe certain Northern European groups’ practice of wearing various headgear, including the heads (and sometimes full bodies) of animals. The ancient Greeks and Roman literature on this was well before the Viking’s time and wasn’t specifically referring to any group that would necessarily eventually become the Vikings. But even then, it is thought to be unlikely those groups wore this type of elaborate and heavy headgear during battle.

In the earliest paintings of Vikings wearing these types of elaborate head gear, the artists actually depicted them with winged helmets, drawing from these Ancient Greek and Roman texts. The Ancient Celtic priests, among other peoples of the world, are known to have worn winged helmets during certain religious ceremonies and it is likely this is where the Ancient Greeks and Romans got the idea for winged helmets.

The image of the Vikings wearing horned helmets, rather than winged, is thought to have been inspired by the small Grevensvænge figurines discovered in the 18th century and which date back to around the 800-500BC (around the Nordic Bronze Age). During the 18th century, when romanticizing Vikings began to pick up steam, these artists and writers attributed these figurines to the Viking Age, which came much later (generally considered to be between the 8th-11th century, or about 1000 years after these figurines were made).

Actual archeological evidence indicates that most Vikings went bareheaded or wore leather headgear, sometimes reinforced with wood. Those who did have metal headgear, usually the chieftains or other wealthy Vikings, wore simple round helmets, typically made of iron and bronze. This makes sense as the Vikings often fought in close quarters (aboard ships, in homes, etc.), which would have made elaborate horned or winged helmets very cumbersome and even dangerous to wear.