September 27, 2010 Noreen
This post is sponsored by DanforthDiamond.com, providing discount engagement rings and wedding rings online for up to 40% off of retail. 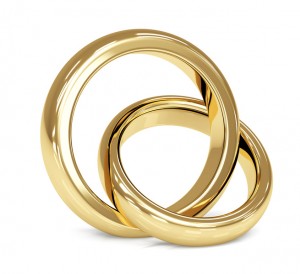 Today I found out the history and symbolism behind the tradition of wearing a wedding ring and why, in most western cultures, it’s worn on the fourth finger of the left hand, otherwise known as the ring finger.

Wedding rings today are a billion dollar sentiment of love, but no  one can really say for sure when this age old tradition actually started. Some believe that the oldest recorded exchange of wedding rings comes from ancient Egypt, about 4800 years ago. Sedges, rushes and reeds, growing alongside the well-known papyrus were twisted and braided into rings for fingers an other decorative ornaments worn by the women in those days.

The circle was the symbol of eternity, with no beginning or end, not only to the Egyptians, but many other ancient cultures. The hole in the center of the ring also had significance. It wasn’t just considered a space, but rather a gateway, or door; leading to things and events both known and unknown. To give a woman a ring signifies never-ending and immortal love.

The materials these rings were made of didn’t last very long and soon were substituted with rings made of leather, bone or ivory. The more expensive the material, the more love shown to the receiver; the value of the ring also  demonstrated the wealth of the giver.

The Roman’s also eventually adopted this tradition but with their own twist. Rather than offering a ring to a woman as a symbol of love, they awarded them as a symbol of ownership. Roman men would “claim” their woman with the giving of a ring. Roman betrothal rings were later made of iron and called “Anulus Pronubus.” They symbolized strength and permanence. It is also said that the Romans were the first to engrave their rings.

It was not until about 860 that the Christians used the ring in marriage ceremonies; even then, it was not the simple plain band as we know it. It usually was highly decorated with engraved doves, lyres, or two linked hands. The Church discouraged such rings as ‘heathenish’ and, around the 13th century, wedding and betrothal rings were considerably simplified, and given a more spiritual look which was very aptly expressed by a Bishop when he dubbed it a “symbol of the union of hearts.” 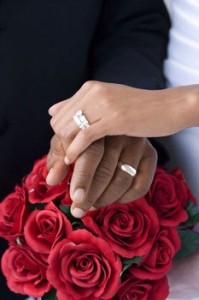 Wedding rings through different stages in history have been worn on different fingers, including the thumb, and on both the left and right hands. According to  a tradition believed to have been derived from the Romans, the wedding ring is worn on the left hand ring finger because there was thought to be a vein in the finger, referred to as the ‘Vena Amoris’ or the ‘Vein of Love’ said to be directly connected to the heart. However, scientists have shown this is actually false. Despite this, this  myth still remains regarded by many (hopeless romantics) as the number one reason rings are worn on the fourth finger.

Another theory thought to be behind the ring being placed on the left hand by Christians seems a little more plausible. Early Christian marriages had a ritual to wear the wedding ring in the third finger. As the priest recited during the binding ,”In the name of the Father, the Son and the Holy Spirit”, he would take the ring and touch the thumb, the index finger, and the middle finger; then, while uttering “Amen”, he would place the ring on the ring finger, which sealed the marriage.

A more practically based theory is that the soft metal (traditionally gold for wedding rings) is less worn or injured on the finger of the left hand, due to most of the world being right handed.  Further, the fourth finger on the left hand is probably the second to the least used finger on a person’s hands outside of pinkies.  Pinkies being small, making a small ring with little surface area to decorate, perhaps motivated people to then place it on the next least used finger, namely the fourth finger on the left hand, which is roughly the size of the other fingers.