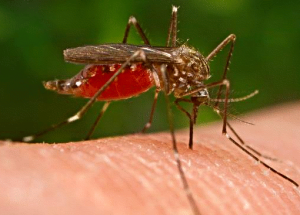 Today I found out why mosquito bites itch.

When female mosquitoes poke their proboscis through your skin so they can suck some of your blood to be later used to make eggs, they inject you with some of their saliva.  This saliva helps them to drink your blood more quickly, because it contains a cocktail of anticoagulants.  Once the female mosquito is full up of your blood or is disturbed, she flies away, leaving some of her saliva behind.  Your body then kicks your immune system in gear as a response to the presence of this saliva.  It produces various antibodies which in turn bind to the antigens in the mosquito’s saliva.  This then triggers the release of histamine.

Histamine is a nitrogen compound that, among other things, triggers an inflammatory response.  It also helps white blood cells and other proteins to engage invaders in your body by making the capillaries of these cells more permeable.  Bottom line, the histamine ends up making the blood vessels near the bite swell up.  This produces a pink, itchy bump where the mosquito poked you.

Scratching the bump only makes this worse because it causes more irritation and inflammation of the sight, resulting in your immune system thinking it needs more antibodies to get rid of the foreign protein.  So the more you scratch, the more it will swell; the itchier it will get; and the longer it will last.