August 12, 2010 Daven Hiskey
Mark S. asks: Do ostriches really hide their heads in the sand in response to being attacked? 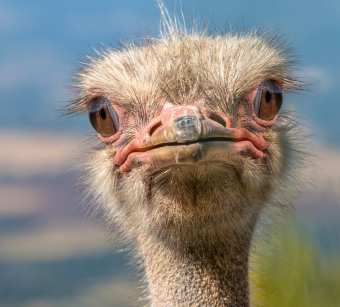 Today I found out that ostriches don’t hide their heads in the sand, contrary to popular belief.

When an ostrich feels genuinely threatened, rather than hiding its head in the sand, it will take off running- fast.  In fact, the ostrich is the fastest animal on two legs having been clocked as high as 45 miles per hour (72 km/h) when being closely chased by a predator.  Just as impressive, ostriches have been shown to be capable of a sustained run of around 30 miles per hour (48 km/h) for over a half an hour. They are also relatively maneuverable at these high speeds, using their wings to help them rapidly change course. Thanks to their speed, endurance, and maneuverability, ostriches can pretty much outrun the vast majority of predators out there, with a few exceptions.

In the few cases ostriches can’t manage to outrun those hunting them, they can be absolutely deadly with their powerful kicks, with the blow being even more deadly thanks to a large claw on each hoof like foot.  They can easily kill a human with a single kick and have been observed to kill full grown lions, if the lion doesn’t get them first. 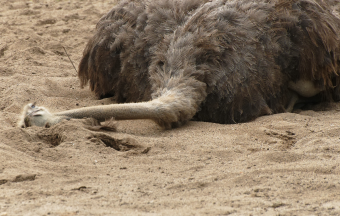 The ostrich also has extremely good eyesight and hearing.  Because of this, they are generally able to perceive predators before the predator sees them.  What they will do when they observe a predator is press their bodies as close to the ground as possible and wait.  Given that they tend to live in very hot savannas in Africa, the heat haze, combined with how low they are to the ground, will make them appear just a mound of dirt in the distance to many predators.  If this fails to work and the predator approaches, the ostrich will usually stand up and take off running.

The myth that ostriches stick their heads in the sand primarily comes from this first line of defense. From a distance, lying down in this fashion makes them appear as if their heads disappear in the sand, even though what they are actually doing is lying down to see if the predator will pass them by so they won’t have to expend the energy in trying to outrun it.