The Difference Between Jelly and Jam 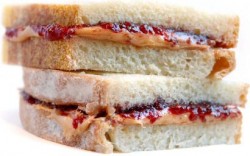 Today I found out the difference between jelly and jam.

The difference between jelly and jam is that jelly is made strictly from the juice of fruit while jam is made from crushed fruit.  Specifically, jelly is made by crushing fruit, then straining out everything but the juice.  The juice is then boiled, typically with sugar and pectin added, the latter of which reacts with the sugar and heat to give the jelly a thicker consistency for spreading.

The first step in making jam is about the same as jelly, but instead of straining the juice, the crushed fruit is left in, often with the seeds, if they are relatively small, such as with certain berries.   Unlike most all jellies, jam may not contain pectin, as the mashed fruit will often give it sufficiently good consistency for spreading.

If you are wondering how to tell the difference between jelly and jam on sight, the jelly will spread pretty evenly, while the jam will tend to be a little lumpy.