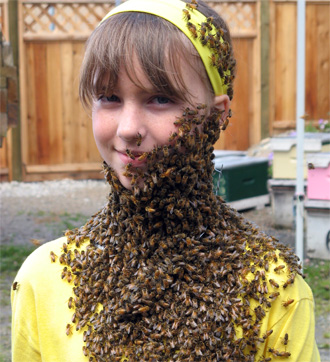 Today I found out that Honey Bees know the world is round and can calculate angles.

It turns out, scientists have figured out how to interpret a Honey Bee’s dance; a Honey Bees dance is where they communicate where to find food, a new home, and things of this nature.  Using this information, an experiment was done called the “Schafberg Experiment”, which was named after the mountain it was performed on.  The only source of food for a colony was placed on the far side of the mountain.  The bees could not fly over the mountain.  However, when they communicated where the food was to be found, they communicated this angle exactly across the mountain, relative to themselves, even though it was an angle they had never flown to the food source, but rather would have had to figure out in their head.

Further evidence of this amazing ability and that they take into account the roundness of the earth is found in their typical food finding dances.  When Honey Bees dance to communicate where a good food source is, they will dance on a comb surface.  The dance consists of the bee turning in circles, on each revolution the bee will bisect the circle at an angle;  the angle with respect to the 12 o’clock represents the angle to fly with respect to the sun.  For instance, if the bee ran from 6 to 12 o’clock, this would mean fly straight forward towards the sun; 7 to 1 o’clock would mean fly just to the right of the sun; 12 to 6 o’clock, fly directly away from the sun.

But it gets even better; these little dances can take a really long time.  So the angle of the sun is going to have changed in the meantime.  The dances might even take all night to communicate.  So while doing the dance, the bee actually calculates the change in angle based on where the sun is right now with respect to the hive.  So if it’s at night when they are doing the dance, they calibrate the angles to associate with where the sun is right now on the other side of the world!  Likewise, when the bees are following the instructions and flying towards the food, they calibrate what they learned based on where the sun is right now vs when the instructions were given.  So basically, bee’s are tiny little math nerds with amazing time keeping abilities and ability to calculate distances without any discernible measuring device… NERDS!!!!

Now in addition to knowing angles, they also need to know how far they need to go in each direction. In order to accomplish this, they wiggle their abdomen’s while crossing the circle.  The more wiggles, the greater the distance; and like with the angles, this is no vague notion of distance.  The bees take and communicate relatively precise measurements on how far they need to go.  Now if the distance to the food source is under about 80 meters, it has been found that the bees will not do the wiggle part of the dance, but will just give the direction to the best spot to go.

But this isn’t the only fascinating things honey bees do.  Today I also found out a boatload of other crazy information about the absolutely amazing Honey Bee: