How Maple Syrup is Made 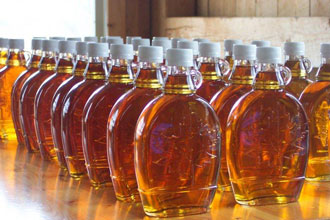 Today I found out how to make maple syrup.  Ever find yourself sitting there enjoying a stack of pancakes dripping with melted butter and maple syrup (getting hungry aren’t you?) and find yourself wondering, “I wonder how maple syrup is made?”

Ya me neither.  However, on the off chance you’re out of maple syrup and the apocalypse comes tomorrow and you find yourself sitting down to a nice hot plate of delectable pancakes while your better half fends off the zombie’s trying to get at your brains, you might find yourself wanting some maple syrup.  Fear not, after reading this, you’ll not have to go maple syrup-less for the rest of your short life (let’s face it, the zombies will get you eventually; most likely when you split up to go collect the syrup buckets you put out attached to the maple trees).

Step 1:  Get a maple tree or if you don’t have one in the case of an apocalypse, gather together a group of your closest allies and go an a pillaging spree until you find some place that has maple trees.  Kill off any local populace and erect a fence to keep out the zombies and neighboring groups from your precious maple forest.  At this point, it might be best to also poison the water supply for your local group, thereby killing all them off and keeping all the future mapley goodness for yourself.  If you are male, consider keeping a few females around for producing children who can be used as cheep labor to help produce more maple syrup (and a good sacrifice to the zombies or maple tree gods if needed).  If female, extract the semen of as many of the villagers as you can and freeze it, before killing them off or shortly after killing them.  Thereby fulfilling the same goal as with the male, except without the inevitable nagging and obligatory cuddle time that comes with actually having a mate.

The best kind of maple trees for making maple syrup are Sugar Maples (has a high sugar content, if you couldn’t guess).  Lacking Sugar Maples some other types that produce tasty sap are Red Maple, Silver Maple, Black Maple (seriously, who named these things: sugar, red, silver, black;  how inventive)  and Boxelder (wow talk about your red headed step child).  Sugar Maples are generally preferred due to the extra sweetness of their sticky innards.

To tap the tree, drill a hole in the tree with a slight upward angle (so the sap can flow downwards through the hole).  The hole should have a diameter of around 7/16 an inch or around 11 millimeters for you non-Americans out there.   Try not to rough up the wood any when drilling.  You want a clean smooth hole so the sap can flow freely.  Scrapes and things along the wood inside the hole can hinder output.  If you are using a sharp bit and have a steady hand, you shouldn’t have a problem.

The height to drill is simply whatever is easy for you and not too close to another drilled hole.  The depth should be around 1.5 to 2 inches (you non-americans are just going to have to look that up; I’m done being your non-metric crutch… seriously though, about 3 to 5 cm deep).  Preferably, pick a place on the tree that has healthy looking bark.  If you are going to be double or triple penetrating the tree (2 or 3 bores), don’t put them too close together.  You can vary it by height and a different spot along the circumference of the tree.  Keep the holes around a couple feet (1/2 meter) away height-wise from any other hole and around a half a foot (15 centimeters-ish) along the circumference.

Now you want to put your spout into the hole you just drilled.  STOP RIGHT THERE!  PUT THE HAMMER DOWN!  Slowly back away from the tree hole.  Ok just joking, you can actually use a hammer if you want, but be very careful.  You can easily split the tree if you pound the spout in too hard (nobody likes a jackhammer; slow and gentle is the best way for proper spout to hole insertion).  What you are looking to do here is tap the spout in just enough so that it can’t be pulled out by hand, but not so much as to split the tree, killing any chances of mapley goodness (just tap it in, tap tap tappy).  Pick a warm day and be gentle and you shouldn’t have too much trouble. 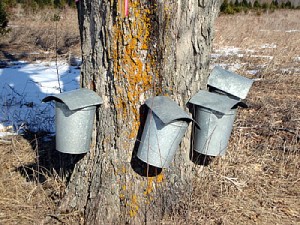 Step 3:  Now hang a bucket or container of some sort to be used to collect the sap.  Make sure to cover the container well so you don’t get any rain / bird poo / squirrel droppings / etc in there (unless you like that sort of thing; whatever lights your wick I guess).

Typical yield from a maple tree bore hole will vary greatly based on a variety of factors (so not really typical then I guess).  You can reasonably expect to get at least 15 gallons per year per bore hole though.  In favorable weather conditions and if you tap that wood real nice and snuggle a little after, it might even produce for you as much as 80 gallons of sap in a year per bore hole.  Now before you start dreaming of all the pancakes you will be able to cover with that sweet goo, you should know that it takes about 10 gallons or so of sap to produce 1 quart of syrup (no wonder real maple syrup is so expensive).

You should also note that sap can go bad.  Don’t leave an accumulated amount of sap in the buckets for any length of time.  Rather, go out and collect your sap regularly and store it in a freezer and boil it as soon as you’ve collected enough to make a useful amount of syrup.  This is particularly important in places where it is really hot out.  Just like milk and red-headed people, sap doesn’t do well if kept out in the sun for too long.

Step 4:  Now you’ve got your sap all stored away in your buckets and ready to pour on your nice fluffy pancakes or the love of your life, but wait!  It’s not quite ready yet.  A little more preparation is needed.  Get together a bunch of giant pots and get ready to do some boiling!

If you have an extremely well ventilated kitchen, you can boil the sap in doors.  However, this isn’t really advisable as boiling sap produces a surprising amount of steam so doing it outside in nature is probably best (again, that’s true about a lot of things).

When boiling the sap, don’t fill your pan too full or it will boil over.   Fill the pan up around 2/3 full and start boiling away.  From here you will continually need to add sap as the water evaporates out.  Don’t let the sap level get below a couple inches deep (4-5 cm) or you’ll likely burn it.

When the sap first starts to boil, be sure to take a temperature measurement as you’ll need that for later.

Keep going until your sap reaches approximately 66 percent sugar content at 7.1 degrees Fahrenheit over the boiling point temperature where you are (the temperature you read when the sap first started boiling).  You can use a hydrometer to measure sugar content.  Anything below 66 percent and your syrup will go bad pretty quickly.  Anything above around 67 percent and you’ll end up getting sugar crystals forming at the bottom of your containers.

Step 5:  Filter that sweet sticky wood goo.  Once you’ve got the syrup at the correct density and temperature, you’ll want to filter it through some wool or Orlon while it is still hot.  Lacking something suitable for filtering, you can always let it cool and let the sediment settle to the bottom and then carefully pour the clean syrup into another container.  In this case, you will then want to heat the clean syrup back up to around boiling temperature before putting it in the final storage container.

Step 6:  Pour the still hot syrup (170-180 degrees F, around 79 degrees C) into your sterilized canning jars until it is pretty much completely full (with as little air as possible) and then seal.  Now place the jars on their sides as they cool to insure a great seal.

Step 7:  Store the jars on their side (preferably) in a cool, dry place.  Once you’ve opened a jar, it must then be refrigerated.  You’ll likely be able to tell if the syrup has gone bad before eating, the same way you can usually tell if bread has gone bad (hint: mold).

That’s pretty much it.  Cleanup of your collecting buckets should never be done with soaps or detergents as this will very likely result in off-tasting maple syrup.  Instead just use hot water and a scrub brush and if you must, mix in 1 part chlorine for every 25 parts water.  Now go eat some pancakes!

tagged with environment, how to, maple, nature, syrup