Sitting Close to the TV Will Not Damage Your Vision 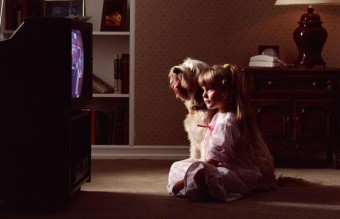 Today I found out that sitting too close to the TV will not damage your vision, contrary to popular belief.

So why do parents the world over still say this to their kids?  Surprisingly, there was actually a very brief period of time where sitting close to the TV could damage your eyes, assuming you owned a General Electric TV in the 1960s.  Specifically, in 1967, General Electric informed the public that many of their color televisions were emitting excessive x-rays due to a “factory error”.  GE fixed this problem by putting a leaded glass shield around the tubes.

Health officials at the time estimated that the amount of radiation being given off by these defective TVs was about 10 to 100,000 times higher than the rate considered acceptable.  They recommended, if you owned one of these TVs, not to sit too close.  As long as you were a few feet away and didn’t watch TV for more than an hour at a time or so at this close range, you were problem fine.  General Electric of course recalled all these TV’s and fixed the problem, so the issue went away.

However, moms the world over have every since felt it was bad for their kids to sit too close to the TV, even though that is no longer the case at all.  At worst sitting excessively close to the TV these days will just give you a headache and possible eyestrain, but for most people probably not even that, and even for those it does happen to, neither of those are in any way permanently damaging.  Both more or less fix themselves shortly after you stop sitting so close to the TV.