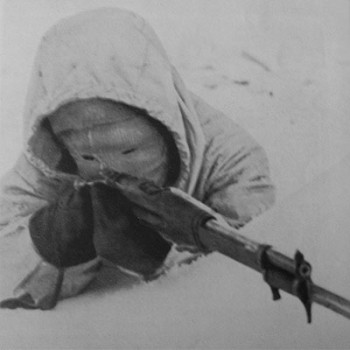 Today I found out Simo Häyhä, arguably the greatest sniper to ever live, sniped over 542 invading Soviet soldiers in World War II using nothing but a bolt action rifle that had no scope.  He also has the distinction of having recorded the highest known number of confirmed kills by any sniper in any major war; with the runner up being Soviet Ivan Sidorenko with 500 in WWII.  In addition to his 542 confirmed sniper kills, he also managed another couple hundred kills with a Suomi 9mm machine gun bringing his total for the “Winter War” to just under 800 kills.  Even more amazing is that he did all of this in under 100 days with his personal best sniping 25 Soviet soldiers in one day.

The “Winter War” was a conflict between Russia and Finland beginning on November 30, 1939, three months after the start of WWII, with the Russians invading Finland.   The Winter War officially ended on March 13, 1940 with the Soviets having captured most of Finland.

Simo Häyhä was a member of a group very similar to the old American “Minute Men”.  He served his required one year with the military in Finland and went home, back to farming and hunting.  When the Soviets invaded he grabbed his standard issue M/28 rifle and gear and reported for duty.  He preferred his rifle, which only had an iron site rather than a scope, over Swedish sniper rifles as it allowed him to keep a slightly lower profile over a scoped rifle; the scopes made you raise your head an extra inch or two making a nice target for other snipers.  In addition to this, scopes on sniper rifles tended to reflect the sunlight which is how he says he was able to kill so many of the Soviet snipers who were sent to specifically take him out.  The really amazing thing about just using the iron sites was that many of his kills were shot at people over 400 yards away.

Simo was assigned to the Kollaa battlefield where an estimated 32 Fins held off over 4000 Soviet Troops at one point and indeed even by the end of the war which the Soviets won, never conceded that particular ground.  Temperatures there typically ranged from around -40 F to -4 F.  As such, Simo would go out by himself to snipe dressed in white camouflage with nothing but a few clips of ammo and food provisions for a day.

Tired of getting their heads blown off all the time by Simo, the Soviets eventually dispatched a group of snipers and a series of artillery strikes to try to get rid of “Belaya Smert” (“White Death”) as they nicknamed him.  He managed to get the best of the snipers sent against him and apparently wasn’t where they thought during the artillery strikes. 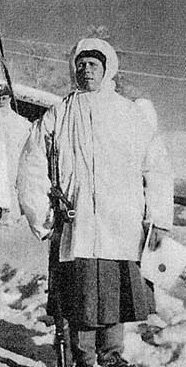 He was however finally shot in the jaw with an exploding bullet in a pitched battle against a large group of Russian soldiers.   Some of his fellow Finish soldiers pulled him from the battle and he survived even though, as they said, “half his head was missing”.  He was then in a coma for nine days, during which Finland lost the war (Coincidence?  I think not!).  He didn’t regain consciousness until March 13th, the day the war ended (presumably the Soviets heard he woke up and decided to stop trying to take any more of Finland and just ended the war right there).  It took Simo a few years to fully recuperate from his wounds, but he went on to live to the ripe old age of 96, dying April 1st, 2002.

During the war, the Soviet army lost close to one million soldiers, close to forty times the number of Finnish casualties.

Simo credited his incredible sniping ability to knowledge of the forests, patience, and practice.  He typically liked to snipe from a sitting position, normally not used by snipers due to giving a larger profile to be seen from.  However, he was very short (5 foot 3 inches), so he was able to sit and still make a very small profile and he felt it gave him a better platform to shoot from.  He would also pack the snow in front of him so that when he shot, none of the snow would waft up giving his position away.  In addition to this, to get around the problem of his breath potentially giving away his position in that frigid place, he would breath through his mouth but keep snow in there to keep his breath from showing up in the air.