How to Test a Car Alternator 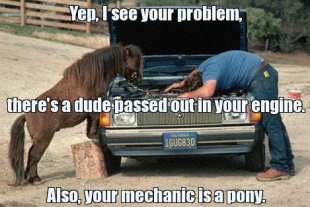 Today I found out how to test a car alternator.

With the engine on: 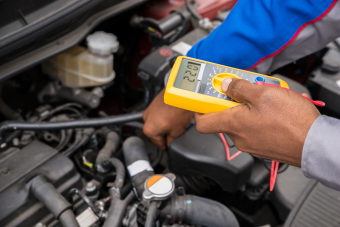 If the alternator is working well, your multi-meter should read somewhere in the vicinity of 14 volts (typically 13.8-14.2).  If it is reading excessively higher than 14 volts (greater than 15 volts) it is possible that the voltage regulator on your alternator is faulty or going bad.  If it is reading lower than 13-14 volts, there are a number of possibilities as to the reason.  First, it is possible that your engine idle speed is too low for the alternator to put out sufficient voltage/power.   Try revving up the engine to 2000 RPM or higher and take a reading.  If the voltage is still too low, check to be sure all the connectors on your alternator are tight and that the alternator belt is not slipping and is spinning on the pulley correctly.  If it is still not putting out sufficient power, then the alternator’s voltage regulator could be bad or the alternator itself may need replaced.

A car alternator needs to be putting out at least 13-14 volts (ideally between 13.8 and 14.2 volts) to effectively charge a 12 volt car battery.  If the alternator is putting out too much voltage (15+ volts), it is likely your battery acid will boil over out of the battery.    When a battery is near fully charged the alternator will cease to put out sufficient voltage to charge the battery and the reading you will get from the battery probing method will simply be the voltage coming from the battery itself.  In this case, you can simply leave your lights on with the car off for ten or fifteen minutes to drain your battery a little bit.

It can also be helpful to test at the battery terminals with the engine off and then turn the car on and test again at the terminals.  If your battery is more or less fully charged, it should read at around 12-13 volts with the car off.  If you’ve run your car for a long time and while the car is running the voltage reading is in the 13-14 volt range, but then you shut the car off and the battery voltage instantly drops to well below 12 volts (10 volts or under; 9 volts or under in freezing weather conditions), it is likely that your battery needs maintenance or replaced.