Twinkies Are Only Good for 25 Days 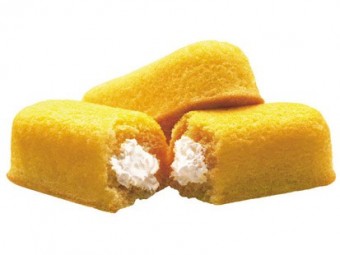 Today I found out that Twinkies have a shelf life of only 25 days.  The popular notion that they “last forever” or for some ridiculously large amount of time is incorrect.

Here are some actual real Twinkie facts:
Twinkies were created in 1930 as ladyfinger-shaped spongecakes.   They were first thought up by James A. Dewar, the Vice President of Continental Bakeries that sold under the Hostess brand.  Dewar was trying to come up with a way to utilize the machines used to make cream filled strawberry shortcake when strawberries were out of season and the machines normally sat idle.  So he got an idea to create a banana cream filled cake.  That’s right.  Originally, Twinkies were filled with banana cream, which I suppose explains why they chose to make them look as they do.

During World War II, bananas became scarce.  Hostess then decided to switch the cream inside Trinkies to vanilla cream.  This ended up being much more popular than the banana filled version. So when bananas became readily available again, they chose not to switch back.

When Twinkies first came out, they not only were banana filled, but they also had an incredibly low shelf life.  This was due primarily to the dairy products contained in Twinkies giving them only a two day shelf life on average.  This obviously cut into the profit margins.

But that’s not the only fuel based ingredient in a Twinkie.  The chemicals that make up the artificial butter flavor are themselves derived from petroleum.

Another interesting ingredient is corn dextrin.  This gives Twinkies their sticky crust.  Another place you can find this wonderful ingredient is in various glues;  for instance, the glue that you find on the back of envelopes.

Interestingly though, of the 39 ingredients that make up a Twinkie, only one of them is strictly a preservative, or rather, its only purpose in being included is because it’s a preservative.  Some of the other chemicals in Twinkies have preserving side effects, but their use is primarily as substitutes for the dairy ingredients.  The lack of these dairy ingredients and the air tight plastic wrap are the primary reason that the Twinkie can last the 25 days on the shelves and can out last so many of its other baked brethren in that respect.

Despite their slightly unhealthy nature (150 calories each; with quite a dose of fat included), Hostess now churns out more than 1000 Twinkies per minute or about 500 million per year.  The cakes are each baked for 12 minutes; injected with cream; flipped over so the round bottom is now the top; then packaged for shipping.

Bonus Twinkie fact:  According to Hostess, it takes about 45 seconds to explode a Twinkie in a standard powered microwave.  Try this at home kids…  Seriously, anybody want to try this and report back on the results?