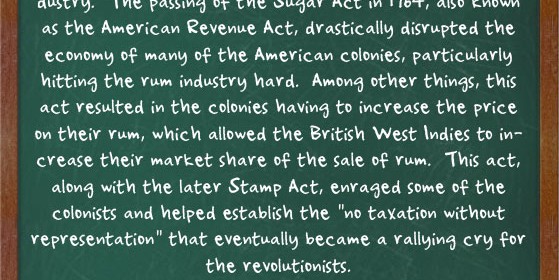 END_OF_DOCUMENT_TOKEN_TO_BE_REPLACED

Today I found out what grog was originally made from. Although today the word “grog” has more or less turned into a slang term to refer to just about any alcoholic beverage in many parts of the world, particularly in Australia and New Zealand, grog was originally just a mixture of rum with water, sometimes with a bit of lemon […]

END_OF_DOCUMENT_TOKEN_TO_BE_REPLACED

Today I found out how rum is made. Rum was once used as a medium of economic exchange in lieu of money.  At one point in Europe, Rhode Island rum was even used as an accepted substitute for gold in economic exchanges.  This drink, which first began being made as we know it today around the 17th century, quickly became […]