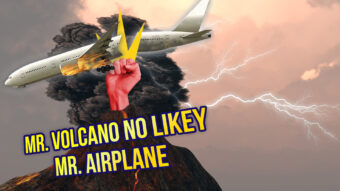 Modern commercial aviation is one of the safest possible forms of transportation, with a fatal accident rate of only one per 4.2 million flights. At this rate, an average person would have to fly every day for 16,581 years in order to have a near-100% chance of being killed in a plane crash. This exemplary safety record is thanks partly to advancements in aviation technology and high manufacturing and maintenance standards; and partly to commercial airliner crews, who are trained to deal with a wide variety of emergencies ranging from bad weather to systems failure to terrorist attack, and if any issue ever pops up, are trained to make sure that never happens again, with redundant systems put in place to stop it. But while training cannot prepare a crew for every possible eventuality, it can nonetheless mean the difference between life and death when the totally unexpected occurs – as the crew of a Boeing 747 discovered in 1982 when they came up against a destructive natural phenomenon none of them were prepared to deal with. This is the terrifying story of British Airways Flight 9.

British Airways Flight 9 – known by its callsign “Speedbird 9”- was a scheduled flight between London and Auckland, New Zealand, with stops at Mumbai, Kuala Lumpur, Perth, and Melbourne. In June of 1982, the route was being flown by British Airways’ Boeing 747-200 City of Edinburgh, with 248 passengers and 15 crew aboard. On the evening of June 24, the original crew disembarked in Malaysia and were replaced by Captain Eric Moody, Senior First Officer Roger Greaves, and Senior Engineer Officer Barry Townley-Freeman, who would fly the aircraft on its final leg to Auckland. The skies over the Indian Ocean were moonless but clear with no clouds on the weather radar, and as Captain Moody and his crew lifted off from Kuala Lumpur they anticipated an uneventful 5-hour flight to Perth.

At around 8:40 PM Jakarta time, Captain Moody finished his dinner and left the cockpit to use the lavatory. Finding the crew facilities occupied, he descended the stairs from the flight deck into the passenger cabin, where he struck up a conversation with purser Sarah Delane-Lea. He was then interrupted by chief stewardess Fiona Wright, who beckoned him into the cabin, which was rather alarmingly beginning to fill with light blue smoke. At first Moody thought it was cigarette smoke, but it soon became clear that the smoke was coming not from the passengers but the air vents in the floor. Yet strangely there was no sign of a fire anywhere on the aircraft, and the smoke smelled strongly of sulfur. But an even stranger sight awaited Moody as he returned to the cockpit to find the windscreen blazing with an eerie electric-blue light. This was St. Elmo’s Fire, a type of static electrical discharge commonly encountered when flying through thin clouds. But this was far more intense than any discharge the crew had ever encountered, and seemed to be forming within the engines themselves, making them glow from within with an eerie stroboscopic flicker. Though the weather radar still showed clear skies, the crew nonetheless turned on the engine anti-icing system and the passenger fasten seatbelts sign as a precaution.

Within two minutes, the situation suddenly went from strange to alarming as engine No.4 surged and flamed out. The crew immediately performed the engine shutdown drill, cutting off the fuel supply and arming the engine fire extinguishers just as they had been trained. But less than a minute later engine two also flamed out, followed almost immediately by engines one and three. The crew could scarcely believe it: all four engines had failed almost simultaneously – something which had never happened before on a 747. The mighty airliner, with 263 people aboard, had suddenly become the world’s biggest glider.

Captain Moody immediately put the aircraft on autopilot and considered his options. Without engine thrust, the 747-200 had a glide ratio of 15:1, meaning it could travel 15 kilometres for every one kilometre of altitude it lost. Starting at an altitude of 11,300 metres, the aircraft could glide for 23 minutes and cover around 168 kilometres – just enough to make it to Jakarta. But there was a problem: tall mountains on the island of Java meant that the minimum safe approach altitude was 3,500 metres. If they could not maintain this altitude by the time they reached the Indonesian coast, the crew would turn around and attempt to ditch the aircraft in the Indian Ocean. With a plan of action in hand, First Officer Greaves declared an emergency to Jakarta air traffic control, announcing that all four engines had failed. However, Jakarta misunderstood that only engine number four had failed, and did not take the emergency seriously. It was not until later when a nearby aircraft relayed Flight 9’s distress call that they finally understood the gravity of the situation.

Meanwhile, the situation aboard Flight 9 was rapidly going from bad to worse. Despite being well outside the in-flight restart envelope of 8,500 metres, the crew desperately tried to reignite the failed engines. However, they succeeded only in making the engines belch 10-metre trails of flame, much to the alarm of passengers seated next to the wings. At the same time, without engine power many of the cockpit instruments began to fail and the cabin was unable to maintain pressurization, causing the emergency oxygen masks to drop from the ceiling. As the crew donned their own oxygen masks, First Officer Greaves discovered that his own mask was broken, the feed hose having detached from the mask itself. Taking quick action, Captain Moody descended to 4,000 metres where the crew and passengers could breathe the outside air, losing valuable altitude in the process. As the aircraft neared the 3,500 metre altitude where the crew would have to turn around and ditch in the ocean, Captain Moody got on the passenger intercom and, in a perhaps the most stereotypical British of British announcements in a deadly emergency possibly, simply stated,

“Ladies and gentlemen, this is your captain speaking. We have a small problem. All four engines have stopped. We are doing our damnedest to get them going again. I trust you are not in too much distress.”

As the flight attendants rushed to comfort the frightened passengers, many aboard wrote final messages to loved ones on tickets or other scraps of paper. Betty Tootell, a British-born New Zealand passenger, later recalled the atmosphere aboard the aircraft:

“There were huge flames coming out of all four engines. You were plagued by questions: Are we going to burn to death? Are we going to choke to death on the smoke? What’s causing it? What are they going to do about it?”

Meanwhile, the crew made a final, desperate attempt to restart the engines. Though all had trained to perform a water landing, this had never actually been attempted with a 747, and none of the crew was particularly enthusiastic about being the first. But after several desperate minutes, engine No.4 miraculously sputtered to life, followed within 90 seconds by the other three. Though the engines surged and vibrated violently, the crew was able to climb to an altitude of 4,500 metres, where the St. Elmo’s fire effect suddenly returned. Once at altitude, Captain Moody requested clearance to land at Jakarta and began his final approach. Minutes later, engine No.2 began vibrating so badly that the crew was reluctantly forced to shut it down, forcing Moody to continue his approach on only three engines.

Strangely, despite the clear night, Moody had difficulty finding the runway, which was finally spotted out the corner of the First Officer’s window. It was only as the airport lights grew brighter that Moody realized that the entire windscreen was opaque, almost as though it had been painted over. Flying blind, Moody decided to use the airport’s instrument landing system to make his final approach. However, the vertical glide slope system at Jakarta was out of service, forcing Moody to use the lateral guidance beam while First Officer Greaves used the airport’s distance-measuring equipment or DME to call out the aircraft’s altitude throughout the approach, a process Moody later described as:

“…a bit like negotiating one’s way up a badger’s arse.”

But in a superb display of airmanship Moody and his crew managed to make a perfect landing on runway 24 at Jakarta’s Halim Perdanakusuma Airport, saving all 263 people aboard the aircraft. Disembarking onto the tarmac, the passengers and crew were stunned to find the nose and the wing leading edges of the aircraft scoured clean of paint, almost as if they’d been sandblasted. And in a sense, they had, for as it turned out, Flight 9 had inadvertently strayed into a massive cloud of ash thrown up by the eruption of Mount Galunggung, an active volcano located some 176 kilometres southeast of Jakarta. This fine, highly abrasive ash not only scoured the fuselage clean and produced the eerie St. Elmo’s fire glow, but also caused the unprecedented failure of all four engines. When drawn into the engine combustion chambers, the ash had melted and stuck to the turbine blades and other interior components, forming a thick, glassy slag that eventually choked and flamed out the engines. It was only when this slag cooled and broke away that the engines were finally able to be restarted. Unlike the water vapour in clouds, volcanic ash does not show up on ordinary weather radar, giving the crew no warning of the approaching danger. Yet despite this wholly unexpected emergency, the crew’s extensive training and experience had won the day, and all three would receive awards for their professionalism and coolness under pressure that night. In total, British Airways Flight 9 travelled nearly 20 kilometres without engines, a record for a non-purpose-built aircraft that would only be broken by Air Canada Flight 143 – AKA the “Gimli Glider” –  the following year.

But Flight 9 would not be the last time a commercial flight would experience the destructive power volcanic ash. On December 15, 1989, KLM Flight 867, a Boeing 747-400 with 245 passengers and crew aboard, was en route from Amsterdam to Tokyo when it flew through an ash cloud thrown up by Mount Redoubt, a volcano in Alaska’s Aleutian Islands. In an eerie replay of Flight 9, all four engines flamed out, forcing the crew to descend more than 4,200 metres before they were able to restart the engines and make an emergency landing at Anchorage. No passengers were injured, though the ash cloud caused more than $80 million in damage to the aircraft.

In light of these two incidents, it is perhaps unsurprising that when the Icelandic volcano Eyjafjallajökull [“Ay-yah-flack-lo-kut”] began erupting in March 2010, thousands of commercial flights to and from Europe were immediately grounded, stranding millions of passengers and causing the greatest disruption in air traffic in the area since the Second World War. As volcanic ash is undetectable by regular weather radar, research is currently underway to develop alternative systems for tracking ash plumes. For example, in 2016 a series of 10 Lidar stations, which use beams of light to detect ash particles, were installed across the UK at a cost of £3 million. The Volcanic Ash Advisory Centre, which operates the stations, hopes that they will allow for better detection and prediction of dangerous ash plumes, allowing commercial flights to be safely routed around them. Combined with airborne Lidar units currently under development, such systems should allow airlines to avoid the massive disruption of the 2010 eruption. But if the unexpected should happen, then it is comforting to know that we can count on the skills and professionalism of pilots like Captain Eric Moody and the crew of British Airways Flight 9.

Down to a Sunless Sea: the Anatomy of an Incident, The Log, http://www.ericmoody.com/Page1.pdf