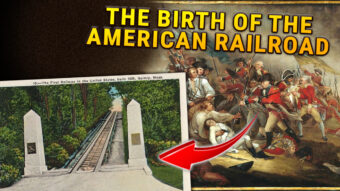 If you go walking through the parks and leafy neighbourhoods of Quincy, Massachusetts, you may stumble upon an unusual set of ruins. At the end of a quiet cul-de-sac, a set of crumbling granite rails rise up a shallow hill into the woods, their end flanked by a pair of carved stone obelisks. While unimpressive at first glance, these ruins mark the humble beginnings of a vital technology that helped drive the industrial revolution and shape the destiny of the North American continent. This is the story of the Granite Railway, North America’s first commercial railroad.

The story of this pioneering engineering achievement begins with a famous battle. On June 13, 1775, at the start of the American Revolutionary War, the colonial forces defending the city of Boston learned that the besieging British forces planned to capture and fortify the hills along the Charlestown Peninsula. This would give them a commanding position overlooking Boston Harbour. In response, 1,200 colonial troops under the command of William Prescott moved under the cover of darkness and occupied Bunker Hill and the neighbouring Breed’s hill. On the morning of June 17, the British forces launched a series of frontal attacks against the colonial positions, but were twice beaten back by savage resistance. Only after the colonial troops ran out of ammunition did the British manage to capture the hills. But the cost of victory was high: British casualties, numbering 1,054, were more than twice those of the colonials. This was a rude awakening for the British, offering a foretaste of the spirited resistance they would encounter throughout the conflict. Though mostly fought on Breed’s hill, the engagement would go down in American history as the Battle of Bunker Hill, and remains a seminal episode in the American Revolution.

In June of 1823, a group of prominent Bostonians led by lawyer William Ticknor formed the Bunker Hill Monument Association to commemorate the battle’s 50th Anniversary. After securing $10,000 from philanthropist Amos Lawrence and purchasing 15 acres of land on Breed’s Hill, the association held a contest to find a suitable design for the monument. The winning entry, designed by architect and engineer Solomon Willard, consisted of a  221-foot-high Egyptian-style granite obelisk – the first monument of its kind in United States. But before construction could begin, Willard had first to locate a suitable source of granite from which to build his monument. After an extensive 300-mile search across New Hampshire, Maine, and Massachusetts, in 1825 Willard finally selected a site near the town of Quincy, just south of Boston. Quincy granite is unusual in that it contains exclusively alkali feldspar and dark quartz, giving it its distinctive grey-green colour.

But while the qualities of the stone were ideal, the location of the quarry presented Willard with a serious logistical challenge: how to transport blocks of stone weighing up to 6 tons across the 12 miles of swamp, forest, and farmland separating Quincy and the site of the monument in Charlestown? Initially Willard planned to wait for winter and use horse-drawn sledges to haul the blocks three miles north to the Neponset River, where barges could carry them across Boston Harbour to Charlestown. However, an associate of Willard’s, engineer Gridley Bryant, suggested a more efficient method: build a railway between the quarry and the river.

Byrant’s vision was nothing less than groundbreaking. While small railways serving mines and other industrial sites had been in use in England for decades and the first inter-city passenger railway – the Birmingham-to-Manchester – was then in the planning stages, nothing on this scale had yet been attempted in North America. Rolling on five-foot-wide wooden tracks sheathed in iron and laid on stone cross-ties, wagons with six-foot wheels would carry quarried stone three miles down a gentle incline to a new 1,200-foot wharf on the river. Steam locomotive technology had only just reached the New World, so Bryant’s wagons were pulled by horses instead. But the design of the wagons themselves was nonetheless ingenious, featuring a clever gear mechanism that allowed a six-ton stone block to be loaded and unloaded by a single worker. Bryant also introduced a number of groundbreaking innovations which soon became standard on modern railroads, including double-truck wagon suspension, turntables and railway switches for turning the wagons around, and snowplows to clear the tracks during the winter. Surprisingly, Bryant refused to patent these innovations, believing they should be for the benefit of all.

With the support of Boston merchant and philanthropist Thomas Perkins, Solomon Willard formed the Granite Railway Company to execute Bryant’s pioneering vision. But the new corporation faced numerous challenges, including stubborn resistance from legislators over granting the railway right-of-way. As Bryant later recalled:

“I awaited the meeting of our Legislature in the winter of eighteen hundred and twenty-five and six…The questions were asked: ‘What do we know about rail-roads? Who ever heard of such a thing? Is it right to take people’s land for a project that no one knows anything about? We have corporations enough already.’”

Thankfully, the vote passed by a small majority, and on April 1, 1826, the Granite Railway Company was granted its charter. The railway began operations on October 7, having taken six months and  $50,000 to complete – two thirds of which was spent on the river wharf. By this time construction on the Bunker Hill Monument had already begun, with Revolutionary War hero the Marquis de Lafayette laying the cornerstone on June 17, 1825. The completion of the Granite Railway, however, sped up construction considerably and dropped the cost of freight from $24 per cubic yard to only $5. Still, the project dragged on for another 16 years, construction frequently stopping and starting as the builders ran out of funds. At one point the Bunker Hill Monument Association was forced to sell off all but 5 acres of the monument site to keep the construction limping along, while neighbours plotted to have the half-built eyesore torn down. In the end, a highly successful fundraising campaign by Sarah Joseph Hale – editor of the Ladies’ Magazine, author of “Mary Had a Little Lamb”, and creator of Thanksgiving – carried the project over the finish line. The capstone was laid on July 23, 1842, and the monument finally dedicated on June 17, 1843 in a ceremony attended by 110 Revolutionary War veterans. Despite the considerable delays, the monument was completed more or less on budget – thanks in no small part to the considerable efficiencies granted by the Granite Railway.

Though originally built to support the Bunker Hill Monument project, the Granite Railway far outlived its intended purpose. Soon after the monument’s completion, the railway began carrying stone for the 52 other quarries which had popped up in the region, helping to make stone quarrying and carving the lifeblood of Quincy’s economy and give the town its nickname “The Granite City”. As the Granite Railway went from private to common carrier with no intervening closure, it is now widely considered to be the first commercial railroad in United States history – though not by much. On April 17, two weeks after construction began on the Granite Railway, the Mohawk and Hudson Railroad was incorporated in New York to allow passengers travelling on the Erie Canal to bypass the Cohoes Falls on the Mohawk River. When the railroad opened on September 24, 1831, its wagons were pulled not by horses or gravity but by a DeWitt Clinton steam locomotive – among the first of its kind in North America. The railroads would go on to play a central role in North American history, helping to drive the relentless expansion into the continent’s western territories.

Yet despite its humble nature, the Granite Railway continued to serve diligently for more than a century, undergoing numerous expansions and improvements such as the replacement of its original wooden rails with metal-sheathed granite. In 1830, a new 315-foot section called the Incline was built to haul stone from the Pine Ledge Quarry to the original rail line 84 feet below. Wagons ran up and down the incline on a horse-powered conveyor belt, carrying an endless stream of stone down the hill. Soon after its completion, the incline became a popular tourist attraction, with travellers including American statesman Daniel Webster and English actress Fanny Kemble eagerly paying to experience the novelty of riding up the incline by rail. Tragically, the railway was also the site of one of the first fatal rail accidents in U.S. history. On July 25, 1832, a wagon carrying four passengers including Thomas B. Achuas, a tourist from Cuba, was travelling up the incline when its tow cable snapped, sending the wagon and its occupants rolling down the track and over a 35-foot cliff. Mr. Achuas was killed instantly and the other three severely injured.

In 1871, the Granite Railway’s original right-of-way was taken over by the Old Colony and Newport Railway, which replaced the original granite tracks with modern steel rails. Steam trains could now take stone directly from the quarries to Boston without the need for barges. The Incline, however, continued to operate as before, its conveyor belt now powered by steam rather than horses. It did not cease operations until 1940, when passenger service on what was by now the West Quincy Branch of the New York, New Haven, and Hartford Railroad was also discontinued. The last quarry in the region shut down in 1963, while local freight service was abandoned ten years later, with much of the original right-of-way being incorporated into the Southeast Expressway.

The now-disused quarry pits soon filled with water and became a magnet for thrill-seeking cliff jumpers. However, such activities resulted in high rates of injury and death, spurring local authorities to take action. At first telephone poles and tree trunks were placed in the water to discourage jumpers, but these soon became waterlogged and sank below the surface, becoming invisible to jumpers and causing the casualty rate to skyrocket. Whoopsie-doodle. Finally, in 1985 the Metropolitan District Commission purchased 22 acres of former quarries to create the Quincy Quarries Reservation. The quarry pits were drained of water and filled with dirt from Boston’s massive “Big Dig” excavation project, leaving only stone outcroppings now popular among rock climbers and graffiti artists.

As for the Granite Railway itself, in the 1970s this pioneering achievement was placed on the National Register of Historic Places and designated a National Historic Engineering Landmark by the American Society of Civil Engineers, prompting efforts to preserve as much of the existing infrastructure as possible. Today, visitors to Quincy can walk along miles of parkland trails and discover vestiges of the original railway, including the original Incline, the remains of a railway trestle, a 100th-anniversary plaque from 1926, and a preserved section of track and railway switch. These remains serve as a monument to the visionary genius of Gridley Bryant and the humble origins of a technology that helped shape a continent.

What is the Granite Railway? Grateful American Foundation, https://gratefulamericanfoundation.com/what-is-the-granite-railway/