Why Do We Want to Squeeze/Bite/Pinch Cute Stuff So Badly? 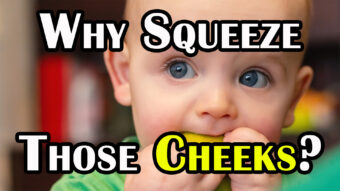 Has this ever happened to you? You are presented with something unbearably cute – a baby, perhaps, or a puppy or a kitten – and are suddenly gripped by an overwhelming desire to pinch, squeeze, crush, or even bite the little thing. You clench your hands, grit your teeth, and maybe even let out an audible growl, so overtaken are you by this sudden rush of aggression. If so, then you are not alone. Known as “cute aggression,” this response is commonly experienced by around 70% of the adult population. But why? At first glance, cute aggression would appear to be evolutionarily maladaptive, increasing our chances of harming the very things – whether human or animal – are supposed to be taking care of. However, recent behavioural and neurological research suggests that this apparently contradictory response may be more psychologically useful than it might at first appear.

While the English term “cute aggression” was first coined in 2013, the phenomenon has been known about for much longer, and many languages even have a specific word for it: for example, “gigil” in Filipino Tagalog, “geram” in Malay, “gemas” in Indonesian, and “muchlovat” in Czech. In behavioural terms, cute aggression is what psychologists call a dimorphous response, in which a positive experience elicits a response usually associated with negative emotions – and vice-versa. Common examples of dimorphous responses include crying during a happy or romantic scene in a movie or laughing uncontrollably when frightened or stressed. In the case of cute babies or animals, the expected response should be an overwhelming desire to care for or protect said creature. Indeed, the very concept of “cuteness” and the instinct to care for cute things are evolutionarily hard-wired into our brains. In 1943, German ethologist Konrad Lorenz proposed what he called the kindenschema or “baby schema,” a set of physical characteristics which our brains interpret as being distinctively “baby-like” and which elicit a strong nurturing instinct. These characteristics include a large, rounded head; a small chin, mouth, and nose; large ears, and large, low-set eyes. The more a face conforms to this archetype, the cuter we consider it to be. Our innate attraction to the kindenschema has even bled over into our treatment of domesticated animals. Dogs, for example, have been selectively bred over thousands of years to appear more and more puppy-like, with floppy ears and more rounded features – such that an adult Labrador  looks considerably younger than a wolf of the same age. The arts and entertainment industry has also taken note of this principle, with cartoons like Mickey Mouse or characters from Japanese manga and anime gradually evolving to possess increasingly childlike features such as rounded heads and disproportionately large eyes.

But if we are hard-wired to care for and protect cute things, why do so many of us also feel like squeezing them so hard? The first formal study to tackle cute aggression – and give it its name – was conducted in 2013 by a Yale University research team lead by neurologist Oriana Aragón. Aragón and her colleagues had 105 online participants fill out a questionnaire featuring such questions as “I can be so happy to see someone that I cry,” “I can be so angry that I laugh,” “If I am holding an extremely cute baby, I have the urge to squeeze his or her little fat legs,” and “I am the type of person that will tell a cute child “I could just eat you up!” through gritted teeth.” The study found that around 64% of respondents confessed to having felt the urge to squeeze a cute baby or animal, while 74% confessed to having acted on that impulse. As a follow-up, the team invited 90 participants to come into the laboratory and watch a slideshow of either cute, funny, or neutral animals. As they watched, the participants were given a sheet of bubble wrap and told to pop as few or as many bubbles as they wanted. Those who watched the cute slideshow popped an average of 120 bubbles, compared to 100 for the neutral slideshow and and 80 for the funny one – providing empirical evidence of an aggressive response to cuteness.

As for why this occurs, Aragón and her colleague Rebecca Dyer hypothesize that cute aggression may serve a regulatory function, allowing people to better control and apply their nurturing instincts. Other neurological studies have shown that cute stimuli activate the mesocorticolimbic or reward system of the brain, and that in certain cases this activation can be overwhelming. As Rebecca Dyer explains: “We think it’s about high positive-affect, an approach orientation and almost a sense of lost control. You know, you can’t stand it, you can’t handle it, that kind of thing.”

According to neurologist Katherine Stavropoulos, in a caretaking situation such an emotional overload could prove detrimental to the child being cared for: “A baby can’t survive alone, but if you’re so overwhelmed by how cute it is and how much you love it, then you can’t take care of it, and that baby won’t survive.”

Aragón and Dyer thus posit that cute aggression might serve as a check to such intense positive feelings, preventing the person from becoming overwhelmed:

“It might be that how we deal with high positive-emotion is to sort of give it a negative pitch somehow, that sort of regulates, keeps us level and releases that energy. It could possibly be that somehow these expressions help us to just sort of get it out and come down off that baby high a little faster.”

To determine whether such a regulating effect was indeed present, in 2018 Stavropoulos and her colleagues at the University of California Riverside conducted an experiment in which 54 participants were exposed to images of both younger and older-looking animals and babies, some of which had been photographically manipulated to make them especially cute. Prior to the experiment participants were given a questionnaire similar to Aragón and Dyer’s, asking whether they had experienced any. Common dimorphous reactions in the past, while afterwards they were asked to describe their emotional reaction to the baby and animal images. Participants were then made to carry out a neutral task such as a word search before being exposed to another batch of images. Stavropoulos hypothesized that not only would those who reported experiencing dimorphous reactions in the past experience more intense emotional reactions to the images, but that they would also experience a less intense reaction in the second session. The results of the study appear to confirm this:

“The expressors of cute aggression are coming down off of that cute-high faster. [But] it could be that they’re just moving back down to baseline because they move more than people that don’t and so it’s really hard to detangle.”

To study the neurological underpinnings of the cute-aggression response, Stavropoulos next wired the participants to an EEG or brainwave monitor and monitored their responses as they watched the baby and animal images. She observed a strong event-related potential or ERP signal which appeared to confirm the results of the earlier study, being stronger in those prone to other dimorphous reactions and weaker on average in the second round of image exposure.

This appears to suggest that cute aggression is part of a complex emotional tug-of-war intended to keep the brain functioning smoothly in the face of powerful emotional stimuli:

“It’s not just reward and it’s not just emotion. Both systems in the brain are involved in this experience of cute aggression. The appetitive side of the reward system is about that forward momentum, the antsy feeling, the pursuit, the urge. So it could be that when we see this aggressive expression, it’s an expression of that urge. It’s showing that you want to get to the baby.”

However, Stavropolous believes that cute aggression might serve another function entirely:

“The very first thoughts were that maybe it is about some sort of emotional homeostasis but we have much stronger and more consistent evidence suggesting it’s something else – a powerful communication signal…[it] reminds you how much bigger and stronger you are physically than this cute little thing.”

Stavropoulos further suggests that the negative facial expressions induced by the onset of cute aggression may communicate to a baby that one is concerned with their welfare and will likely take care of them.

But whatever its ultimate purpose, the fact that cute aggression is not a universal experience is what truly fascinates her:

“When I describe the phenomenon to people, I usually see that about 70 to 75 percent of people nod immediately and know exactly what I’m describing and have experienced it. They think “this is weird; I’m probably the only one who feels this way. I don’t want to hurt it. I just want to eat it.” The other 25 to 30 percent look at me strangely and have no clue what I’m talking about or why anyone would feel that.”

That remaining 25-30% may also offer valuable insights into other, more serious psychological conditions such a sociopathy, psychopathy, or postpartum depression, all of which involve difficulty feeling empathy or nurturing instincts. Cute aggression may also help explain certain aspects of autism, as Stavropoulos explains:

“There’s a lot of literature about people with autism having service dogs with huge success, or having horses they really connect with that help them understand the social world. Maybe they feel the strong caretaking urge but don’t feel overwhelmed, and that’s a strength of theirs.”

The upshot of all of this, however, is that as odd as it might feel, cute aggression is entirely normal. As Rebecca Dyer reassures us: “We don’t have a bunch of budding sociopaths in our studies that you have to worry about.”

So go ahead: squeeze that adorable puppy. You know you want to.

Explainer: What is Cute Aggression? The Conversation, September 9, 2013, https://theconversation.com/explainer-what-is-cute-aggression-16884