The Curious Case of the Extreme Sport Mensur 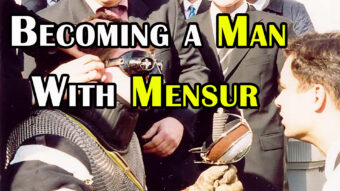 The modern sport of classical fencing has come a long way from its origins in the 15th-Century practice of duelling. Over the past 600 years swords became blunted, protective equipment increased, and rules steadily codified to produce a safe, formalized Olympic sport in which serious injuries are rare. But at the same time, another, more brutal form of fencing also survived, clinging to existence in university basements and clubhouses across Europe. It is a form of ritualized swordplay so steeped in the traditions of duelling and martial honour that not only are injuries common, they are actually encouraged. Welcome to the hardcore world of Mensur, or German Academic Fencing.

Mensur is a practice unique to Studentenverbindungen or student corporations, a kind of fraternity common to universities in German-speaking countries like Germany, Austria, and Switzerland and Baltic states like Latvia and Estonia. These societies, which date back to the Middle Ages, are built around the notion of lifelong brotherhood among their members and carry out a number of elaborate rituals to reinforce this bond, including the wearing of couleur, distinctive caps and ribbons bearing the corporation’s colours; the kneipe, or ceremonial gathering; and Mensur.

Deriving its name from the Latin word for “dimension” – referring to the distance between participants – Mensur is a formal duel between two individuals fought using special sharpened, basket-hilted sabres called mensurschläger. Unlike in traditional fencing, fighters – or Paukanten – stand a fixed arm’s length apart and are forbidden from moving their feet or even dodging their opponents’ blows. There is also no scoring nor any designated winner or loser. This is because the aim of Mensur is not swordsmanship, but rather to demonstrate one’s courage and character by taking an opponent’s blows without fear or flinching. As Hermann Rink, former head of the Association of Old Corps Students explains:

“The object and purpose of [student corporations] was and still is solely the education of students to become a strong, free and cosmopolitan personality who is not held back by religious, racist, national, scientific or philosophical limitations of the mind. The need to overcome one’s own fear, dedicated to the union of his Corps, and the connected strengthening of the sense of community aids the personal growth just as does taking a hit without losing one’s stand and accepting the assessment of the Mensur by the own Corps Brothers.”

These notions of courage, honour, and the ability to endure hardship unflinchingly were considered central to the German character for hundreds of years, and were instrumental in preserving and maintaining the practice of Mensur up to the present day. The role of Mensur in defining a student’s character is perhaps best exemplified by the associated culture of duelling scars. Though Mensur bouts are carried out with sharpened swords, as the aim is not to kill or seriously wound one’s opponent the combatants wear elaborate protective gear including a long padded or chainmail shirt, a throat protector, a gauntlet on the sword hand, and metal goggles with a nose protector. During the bout only hits to the head are permitted, with the bout ending when first blood is drawn. The resulting scar, known as a “smite” or schmiss, has long been considered a badge of honour, with German Chancellor Otto von Bismarck once declaring that a man’s courage and bravery could be judged by the number of scars on their cheeks. In the 19th and early 20th centuries, duelling scars – and the corporation membership they indicated – were seen as a sign of a man’s ability to hold government office; indeed, in 1928, 20% of senior civil service positions in Prussia were held by former members of the Kösener student association. Scars were also thought to enhance a man’s eligibility as a potential husband, leading many who were unable attend university or join student corporations to cut their faces with razors to achieve the same effect. Those with actual duelling wounds also often picked at their scabs to deepen and enhance the resulting scars. As most student corporation members were also members of the aristocracy and many aristocrats became military officers, the practice of Mensur eventually lead to the cliché of the scarred German officer. Indeed, many prominent military leaders up to the Nazi era – including SA leader Ernst Röhm and SS Commando leader Otto Skorzeny – bore prominent duelling scars on their faces.

Despite its eventual longevity, Mensur nearly disappeared at numerous times throughout its history, only to reappear and adapt itself to the changing times. While modern Mensur emerged around the mid-19th Century, the tradition of student duelling stretches back 15th Century, when the court sword or Kostümdegen was an essential part of everyday aristocratic dress. While the common people were forbidden from carrying swords, in many German principalities an exception was made for university students so they could defend themselves if attacked while travelling to and from school. This, unsurprisingly, lead to an explosion of duelling, with students fighting each other over the slightest perceived insult to their honour. These affairs were very often deadly, as the preferred duelling weapon, a thrusting rapier known as a Pariser or “Parisian” sword, could easily inflict lethal puncture wounds. In the 17th century an attempt was made to curb these so-called strassenrencontre or “street fights,” through the introduction of the kartellträger, or regulated duel. Instead of fighting each other on the spot, the aggrieved parties would agree to meet at a prearranged time and place, the duel being overseen by a referee, the duellists’ “seconds”, and a doctor to tend to any injuries.These duels were fought not to the death but typically to the drawing of first blood, the aim being to secure satisfaction for the insulted party. But due to the thrusting nature of the combat many duellists still died, and it was not until the 1760s that the University of Göttingen introduced a new type of slashing sword known as the Göttinger Hieber. This was soon adopted by many German-speaking universities, causing a dramatic drop in the death rate.

In 1763 following the Seven Year’s War, Frederick the Great, King of Prussia, outlawed street duels and the public wearing of swords by civilians, resulting in legalized duelling becoming the exclusive preserve of military officers and university students. At first duels were reserved for resolving disputes and perceived insults, but as more and more students without actual grievances sought to prove their courage and skill on the duelling ground, a formal system of challenges was developed. This involved uttering a standard code-phrase – typically “dummer junge,” or “stupid boy” – which was not just an insult but rather an invitation to duel. But by the mid-19th Century this too was abolished in favour of the Bestimmungsmensur or “determining duel”, wherein rather than challenging each other, combatants were instead chosen by the vice-chair of their student corporation. These duels were no longer about settling disputes but rather proving one’s character, and fighting one became a prerequisite of entry into a corporation. This is considered the birth of modern Mensur.

The latter half of the 19th Century saw an explosion in the popularity of Mensur, especially in Prussia – a phenomenon attributed to two major factors: extended peace and government reforms. For much of Prussian history the officer corps was the exclusive preserve of the aristocracy, but in 1859 sweeping military reforms lead to the creation of a new reserve army whose leadership was open to members of the middle class. Aristocratic officers, seeing this as a challenge to their elite status, took to fighting duels in order to demonstrate their superior breeding and character. Between the end of the Franco-Prussian War in 1871 and the outbreak of the First World War in 1914, the newly-unified Germany fought no major conflicts, and an officer corps thirsting for combat turned once again to Mensur to preserve their martial spirit. During this period German chancellor Otto von Bismarck also implemented sweeping government reforms including lowering taxes and introducing social security, one result of which was to allow many middle-class students to attend university for the first time. Like the officer corps, the largely aristocratic student corporations saw these new arrivals as a threat to their elite status, and Mensur as one means of preserving it. By the late 19th Century Mensur was so popular in Germany that Mark Twain devoted several chapters of his 1880 travelogue A Tramp Abroad to it.

Yet despite its popularity, Mensur was about to face one of the first major challenges to its existence. While by this time Mensur had become one of the safest sports in Europe – placing behind even cycling in terms of annual deaths – accidents still happened, and in 1877 the death of a student fencer at the University of Göttingen lead the German government to ban Mensur outright. However, the practice still continued, with secret duels taking place in the basements of student corporation clubhouses across Germany. In 1890, Kaiser Wilhelm II carried out an investigation into the prevalence of Mensur in Germany, at the conclusion of which he declared: “[Duelling provides] the best education which a young man can get for his future life.”

This royal endorsement effectively overturned all previous prohibitions on Mensur, and the practice enjoyed yet another surge in popularity. It would remain popular until the mid-1930s when it was officially banned by the Nazi regime. Hitler’s quarrel lay not with Mensur itself but rather with the student corporations who practiced it, whom he saw as representing the old aristocratic class whom he despised. Hitler was also suspicious of the strong bond of brotherhood between corporation members, which he believed undermined loyalty to the state. But just like in the 1880s, Mensur did not disappear; it simply went underground. Student corporations, forced by the Nazis to suspend their activities, instead reorganized as “comradeships” like the Hermann Löns group in Freiburg, which continued to host Mensur duels in secret. Indeed, over 100 recorded duels were fought in Freiburg alone throughout the Second World War.

After the war, the occupying Allied forces banned all military sporting organizations in Germany. While Mensur had only been practiced by students for decades, its martial nature and heritage was deemed sufficient for it to be included in the ban. This prohibition lasted until 1953, and while Mensur quickly reestablished itself at many German universities, it would never again come close to the popularity it enjoyed in the late 19th Century. Today Mensur is practiced by around 400 student corporations across Germany, Austria, Switzerland, Belgium, Poland, and the Baltic States, though in some countries like Switzerland the practice is frowned upon as excessively violent, with many corporations turning to other sports like extreme hiking as an alternate means of building character and brotherhood. But many students still swear by this medieval trial by combat and the brutal but vital lessons it teaches. As Albrecht Fehlig, spokesman for the Student Corps Associations, explains: “Some people regard honour as an old-fashioned term. We see it in close relationship with human dignity. Corps students are obliged to respect the dignity of other persons and not to tolerate a violation of their own dignity. This has a significant effect on our social life and contributes to the unique atmosphere of a corps house.”