12 Crazy Sports From the Ancient World 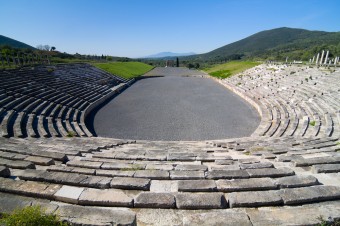 1) Pankration: While today we have MMA, the Ancient Greeks had something known as Pankration, which was something like a free-for-all hand to hand fight that mixed boxing, kicking, and wrestling.

There were only two rules: don’t bite (nobody likes a biter) and don’t gouge out your opponents eyes. Everything else was fair game. There were no time limits and, except in rare cases where a judge might intervene, the fights lasted until one person was coerced into giving up or died.

After winning your match, you’d then be paired off to fight another. This would continue until just two fighters from the original group of entrants were left. They’d be paired off and the winner of that match would be named the champion.

Amazingly, in some of these competitions there are known to have been thousands of entrants. It’s thought in these cases, the fighting must have occurred over more than just one day. In the Olympics themselves, it was typical to have just 15-20 final combatants, to keep the number of rounds in a day down, with preliminary rounds coming before to see who would be among the final group to compete in the Olympics.

Incidentally, “Pankration” essentially means “all powers”. The sport and highly developed style of fighting generally associated with it (kick-boxing/wrestling) were believed by the Greeks to have been invented by Heracles and Theseus. Besides being used as a sporting event, many Ancient Greek soldiers, such as the Spartans, trained in the methods of fighting used in the sport.

2) Fisherman’s Joust: Imagine two groups of guys each hopping into their boats, rowing out into the Nile, and proceeding to beat the crap out of each other with their oars and pointed gaffes. This often took place before the Pharaoh and many times the bloody mess would entice crocodiles and hippos to enter the fray (good times). Later the Greeks and Romans adopted similar types of fighting games. The sport has since been revived in France, though is quite a bit tamer than the original, and presumably no crocodiles are ever involved, though maybe for old time’s sake, one should be included aboard each boat. 😉

3) Naumachia: This was the Roman’s version of Fisherman’s Joust. The name of this event roughly translates to “naval warfare”. The Romans would fill an arena with water, add a bunch of boats and recreate famous naval battles. These were often extremely bloody, featuring prisoners of war or those sentenced to die, set to fight one another with very high mortality rates, unlike many other such competitions.

4) Venatio: It’s hard to say whether this ancient death match was worse for the slaves or the animals recruited to fight them. In fact, the Romans were so intrigued with pitting humans against animals that on the inauguration of the Colosseum over 9,000 beasts were pitted against humans and killed.

Many times, the humans met a similar fate.  For instance, in some cases, the humans were not given any weapons at all and the wild animals, such as starved lions or bears, they were pitted against were meant to win. These matches also often included the telling of some drama with the humans as the central characters of the plot. These types of weaponless “matches” were meant to be executions done in such a way as to provide entertainment for the masses at the same time.

5) Nguni Stick Fighting: One of the few sports on this list that is actually still practiced today, the name of this game just about sums things up. The Zulus would essentially beat the crap out of each other with sticks (one stick for offense, one for defense). Although people seldom died, the participants would often walk away with numerous scars that they would wear like badges of honor. Weddings among those who practice this, even today, often involve warriors from both the bride and groom’s families getting together and fighting one another to establish who the best fighters are in each group.

6) Pelota Purepecha: What was essentially field hockey for pyromaniacs, this ancient mesoamerican game used a flaming puck. Recently, it has actually started making a comeback as the Mexican government is pushing to revive its ancient past times and a flaming puck is uber cool.

7) Shin Kicking: Consisting of two people holding their opponents neck and attempting to kick each others shins, this simple sport has been practiced in England for hundreds of years.

Although it’s not as ancient as several others listed here, nor lethal, considering the fact that the early version of the sport featured steel-toe boots and training for a match involved hitting your shins with various sized hammers, we definitely consider this to be hardcore enough to keep on this list.

If you were wondering how you win at this sport, the object is simply to get your opponent to fall to the ground. Today there is even a World Shin-Kicking Championship.

8) Camel Jumping: Practiced in antiquity by men of the Zaraniq tribe in Yemen, this ancient sport has just recently started making a comeback with participants trying to jump over as many camels as they possibly can.  From this, we can only surmise that the people of the Zaraniq tribe are apparently the frat-boys of Yemen.

9) Pato: The official sport of Argentina, Pato was originally played with a live duck, although after many government interventions participants now use a ball instead. With players on horseback it’s something of a cross between polo and basketball, the objective being to get the ball to its own side. If you are wondering “why a live duck instead of a ball?” in the original version, the goal was to get the duck back to your “ranch house”. In some cases, this was a literal thing as a match might be played such that your farm might be your team’s base and your neighbor’s the other team’s base.

In the early days, it was common for the duck to be killed during the match and knife fights and the like frequently broke out. In the late 18th century, due to trying to discourage the game and extreme violence in it, there were some Catholic priests who refused to give a Christian burial to any person who died during a Pato match.  These days it’s not nearly as violent as it use to be.

10) Buzkashi: The national sport of Afghanistan, this game involves a number of mounted players fighting violently over the carcass of a headless goat, which players try to pitch across a goal line. (Seriously)

When the Taliban ruled Afghanistan, they outlawed the sport deeming it immoral, but since they’ve been ousted, Buzkashi’s popularity has once again surged within the nation, with some matches drawing thousands.

While using a headless goat carcass might seem barbaric, it should be noted that the vast majority of sports in the world tend to use the skin of various animals, which is perhaps less visually gory, but I’m guessing it’s all the same to the animal involved.  And hey, simply using the readily available carcass, rather than chemically treated skin shaped around something to form a ball and then shipped all over, is much more environmentally friendly. 😉

11) Viking Skin Pulling (a.k.a. extreme tug of war): Essentially one big game of tug-of-war, the Vikings preferred using animal skin over rope and playing over a huge fire pit. Usually the winners would walk away with the spoils of the town they had just plundered which often included rape-rights to the women. As you may have guessed, the losers either showed their cowardice by letting go, or became intimately acquainted with a roaring fire pit.

12) Ulama: Although this sport is still popular in parts of Central America, the original game created by the Mayans is one of the most insane sports on this list, despite the game itself being quite tame. Something like basketball, the players would bounce the balls off their hips and attempt to the get the ball through a hoop attached to the wall. The crazy part? There are references to games where the balls were constructed out of human skulls. And in case you were wondering where they got the skulls from, there seems to have been times where all you’d have to do to find out is stick around until the end of the match. Let’s just say the losers, sometimes the whole team, sometimes just the captain of the losing team, would make a donation…