The Curse of the Hope Diamond 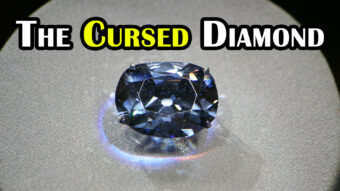 The Hope Diamond’s story begins over a billion years ago, when carbon under immense pressure formed the larger diamond from which the Hope Diamond would spring. Not only was the mother stone large, but it was given a rare blue color due to the presence of high amounts of the element boron within the carbon.

The diamond’s story in human hands, as well as the origins of the alleged curse that goes with it, has murky beginnings that date back to the 1600s. French gem merchant Jean-Baptiste Tavernier acquired the stone around the 1660s while in India. It is thought to have been originally mined from the Kollur mine in the Gunter district of Andhra Pradesh. Who originally owned the gem is unknown. Tavernier is believed to have possibly acquired the diamond through theft. Unconfirmed accounts stated that the original form of the Hope Diamond was as stolen from a statue of Sita, the goddess wife of Rama, who was the seventh Avatar of Vishnu. Thus, setting the curse in motion. Whether or not it was Tavernier or someone else who allegedly plucked the stone from the statue is lost to history.

What was confirmed is that Tavernier came back to Paris with the precursor to the Hope Diamond, a loosely triangular stone of an astounding 115 carats. This became known as the “Tavernier Blue.” He subsequently sold the diamond to Louis XIV. The details of the sale vary, and may have involved several other gems as well. Louis XIV had the stone recut, asking the court gem master to “make him a piece to remember.” Work on the stone took two years. This yielded a 67-carat stone known thereafter as the Blue Diamond of the Crown of France, or simply, the “French Blue.”

Louis XIV’s great-grandson, Louis XV, had the piece affixed to a more complex pendant, but it fell into disuse after his death. Eventually the stone was owned by Louis XVI, and was thought to have been worn by his wife, Marie Antoinette. Reports cast doubt on this, as the stone’s pendant was supposedly reserved for the King, but the events to come nonetheless launched the notion of the curse.

The French Revolution was set in motion, and Louis XVI and family were put in prison during the “Reign of Terror.” While they were imprisoned, thieves broke into the Royal Storehouse and made off with the Crown Jewels. Some would later be recovered, but the French Blue was not. Louis XVI and Marie Antoinette were killed by guillotine in 1793, severing the necks from which many of the Crown Jewels once hung.

The French Blue was likely smuggled to London on the heels of being stolen in France, and remained at large for some time. In this period the Hope Diamond was thought to be cut from it. This was confirmed in 2008, when a leaden model of the French Blue was rediscovered in the archives of the National Museum of History in Paris. Details from the leaden model matched those from the Hope Diamond perfectly. It was also discovered that the French Blue had also been roughly recut along the way, and that this work on the stone visibly changed its character.

It was in 1812 that the earliest date of the existence of the Hope Diamond, as cut from the French Blue, was confirmed. London diamond merchant Daniel Eliason described the stone as a “massive blue stone of 45.54 carats.” In the ensuing years, until 1830, the gem was thought to have been owned by George IV of the U.K. No records of his ownership exist in the Royal Archives at Windsor, but the consensus is that he owned it. It may have been sold to cover his debts. In any case, next up in the chain of ownership was London banker Thomas Hope, who acquired the diamond for either $65,000 or $90,000, depending on reports. The gem appeared in a published catalog of Hope’s gem collection, and it was then that it became known as the “Hope Diamond.”

When Hope died in 1839, his heirs fought an extended legal battle over the stone. Henry Thomas Pope, his nephew, eventually inherited it. He displayed it in the Great Exhibition of London in 1851 and the Exposition Universelle in Paris in 1855. His wife Anne Adele inherited the gem when Hope died in 1862, and it bounced around among new owners for several more decades, many of which had marriage and financial troubles and had to sell the stone to cover debts. This burnished the story of the curse.

At some point in the early 1900s the Hope Diamond made its way from the U.K. to New York with Simon Frankel, a famous diamond dealer. But Frankel’s business fell on hard times. He referred to the stone as the “hoodoo diamond.” He then sold the diamond for $400,000, about $11 million dollars today, through an intermediary to Sultan Abdulhamid of the Ottoman Empire. He, too, ran into financial problems, and his reign faltered, causing him to sell the stone.

In 1914 it fell into the hands of familiar name in the jewelry world – Pierre Cartier. Cartier would in turn woo Washington, D.C. socialite Evalyn Walsh McLean and her husband, Edward Beale McLean – heir to The Washington Post and Cincinnati Enquirer fortune – to buy the Hope Diamond from him.  Cartier tried several times to get Mrs. McLean to buy the diamond, and she eventually did purchase it from him, but only after Cartier had it reset to her liking. The sale was the subject of an article in the New York Times in which the newspaper claimed that the McLeans had tried to back out of the deal after learning about the curse. Other accounts claim that the McLeans had fabricated the story of their fear of the curse to increase the value of their purchase.

Mrs. McLean’s eccentric ways and how they manifested themselves with the diamond became the stuff of legend. She would wear the diamond around her neck around town, and even around the neck of her Great Dane, Mike. Guests at the McLeans’ parties would be treated to “find the stone” games, as Mrs. McLean would hide it on their property and challenge guests to locate it. McLean even hired a former Secret Service man to provide security during these events. Another story tells of Mrs. McLean hosting guests at her house one evening and asking somebody to turn the record player on – one of the Gramophone models with the enormous horn. Upon being told the record player wasn’t working properly, Mrs. McLean remembered that she put the diamond in the horn.

Mrs. McLean called on another well-known woman who lived near her in the wealthy playground of Aiken, South Carolina, named Eulalie Salley. She asked Mrs. Salley, a suffragist and incidentally the first woman in South Carolina to be granted a real estate license, if she would like to come over to see the Hope Diamond. Mrs. Salley jumped at the chance. After arriving at the McLean’s home, Mrs. Salley was surprised to be led to Mrs. McLean’s bedroom, against the mores of the day. Mrs. McLean reached in her stocking drawer, pulled out a stocking, and out fell the Hope Diamond. Incredulous, Mrs. Salley stated “Mrs. McLean, you’re keeping the most famous gemstone in the world in your underpants? To which Mrs. McLean allegedly replied, “My Dear, at my age, who is going to look there?”

Mrs. McLean was friends with President Warren G. Harding. They had a mutual friend named Gaston Means, who was a former Bureau of Investigation officer. When Charles Lindbergh’s son was kidnapped, Mr. Means told Mrs. McLean that he knew where the baby was being held. In exchange for $100,000 from Ms. McLean, he claimed that he could get the baby back, and in turn Mrs. McLean and he would be heroes. She was to find out it was a cruel hoax. Means made off with the money – the kidnapped baby was already dead.

And so went so much of Mrs. McLean’s life after buying the Hope Diamond. In addition to the Lindbergh baby fiasco, two of the McLeans’ children died young, Mr. McLean was committed to an asylum in his 40s, and the diamond had to be sold upon her death to cover her estate’s debts. Hope Diamond Curse aficionados naturally attribute all of this to the diamond.

The trustees of her estate sold the stone to Harry Winston, a diamond merchant in New York. In fact, he bought all of McLeans’ jewelry. Winston displayed the Hope Diamond during a tour of the United States with his extensive jewel collection. He also had the Hope Diamond’s bottom facet redone to increase the gem’s sparkle.

Years later, the Smithsonian talked Winston into donating the stone to their proposed gem collection. And on November 10, 1958, Winston agreed. But he did not have security transport the stone, nor did he personally hand deliver it. Winston sent the Hope Diamond through the U.S. Mail as you would any package, without any fanfare or even mentioning it to the postal service. Simply popped it in a box and mailed it off.

The stone arrived as planned, but the mailman who delivered it, James Todd, had his leg crushed in an accident not long after, the last significant event in the alleged curse.

Winston never believed in the curse. And he lived a long healthy life with no undue bad luck apparent during his lifetime.

The Diamond has been the centerpiece of the Smithsonian’s gem collection, greatly increasing attendance and thrilling guests for decades since. It is said to be insured for $250 million. You can still see it there today. Seemingly curse free.

Gregory, J. 2011. The Hope Diamond: Evalyn Walsh McLean and the Captivating Mystery of the World’s Most Alluring Jewel. Turner, 96 pp.