The Badass Sergeant Who was His Own One Man Army 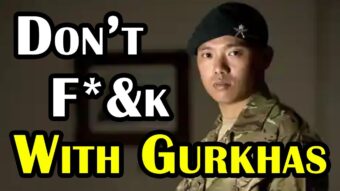 In 1814, some 20,000 troops of the British East India Company launched an assault on the Kingdom of Ghorka in what is today Nepal, seeking to expand their influence into the Indian subcontinent’s mountainous northern territories. To their surprise, the British encountered unexpectedly fierce resistance from local mountain warriors known as Ghorkalis, and the conflict quickly degenerated into a bloody two-year slog. So impressed were the British by the Ghorkalis’ fighting spirit that defectors were quickly integrated into their own ranks. And when the Anglo-Nepali war finally ended in March 1816 with the signing of the Treaty of Sugali, the British took an “if you can’t beat ‘em, join ‘em” attitude and formed entire units of Gurkha soldiers commanded by British officers. These units quickly became an integral part of the British Army, taking part in every major conflict over the next 200 years. In this time, they have acquired a reputation that can only be described as legendary, with an astonishing 26 Gurkhas being awarded the Victoria Cross, the UK’s highest military award for gallantry. With a motto of “better to die than be a coward,” the Gurkhas are known – and feared – the world over as among the world’s most fearsome and deadly warriors. How deadly? Well, look no further than the story of Acting Sergeant Dipprasan Pun, who while serving in Afghanistan in 2010 single-handedly defended his outpost against a large group of Taliban fighters and redefined the word badass.

Born in Bima, Western Nepal but currently living in Ashford, Kent, Dipprasan Pun comes from a long line of soldiers, with his father and grandfather also serving in Gurkha regiments. His Grandfather, Tul Bahadur Pun, even received the Victoria Cross in 1944 while serving in the Burma theatre of WWII. In September 2010, the then 31-year-old Pun was an Acting Sergeant in the 1st Battalion Royal Gurkha Rifles, stationed in Helmand Province in southern Afghanistan. On the night of the 17th, Pun and three other soldiers were left to guard their control post near the town of Babaji while the rest of their unit moved out to secure the surrounding roads ahead of the next day’s parliamentary elections. Throughout the night, the four men took turns manning the sangar, or elevated guard tower, at the centre of the compound.

Sergeant Pun was standing guard in the tower when he suddenly heard what sounded like a cow or donkey braying in the darkness. At first he ignored it, but he soon grew suspicious and climbed higher up the tower to get a better look. It was then that he spotted two Taliban insurgents planting an Improvised Explosive Device, or IED, by the compound gate. Before Pun could react, the air filled with tracers and rocket-propelled grenades as a hidden force of Taliban launched a coordinated surprise attack on the compound. While most of us would have reacted to such a situation by making our trousers significantly damper and a bit more smelly, Dipprasad Pun remembered that he was, after all, a Gurkha, and responded accordingly:

“At that time I wasn’t worried, there wasn’t any choice but to fight. The Taliban were all around the checkpoint, I was alone. I had so many of them around me that I thought I was definitely going to die so I thought I’d kill as many of them as I could before they killed me. At first I was a bit scared, but as soon as I started firing, that feeling went away”.

With Taliban closing in all around him, Pun cooly gathered up two radios and used them to call his commanding officer for reinforcements. This done, he then went into Super Gurkha Rage Mode, and with a cry of “Marchu talai!” – Nepali for “I will kill you all!” , pulled the guard tower’s L108A1 general purpose machine gun off its tripod and proceeded to go full John Rambo on his attackers, hip-firing the weapon in a 360-degree arc. Once his ammunition was exhausted, Pun moved on to lobbing grenades off the tower and even set off a Claymore antipersonnel mine before picking up his SA80 service rifle and continuing to lay withering fire upon his attackers. At one point a Taliban fighter climbed up the side of the tower and attempted to rush him, but Pun spotted him, whirled around, and fired – only for his rifle to jam. Apparently determined to prove that a Gurkha can kill you with anything, Pun reached for a nearby sandbag, but it had not been properly tied and the sand spilled harmlessly to the floor. So with seconds to spare Pun picked up the heavy machine gun tripod, folded it, and hurled it in his attacker’s face, sending him toppling off the tower to his death.

Pun continued to beat back the Taliban assault for nearly a quarter of an hour before the rest of his unit arrived and finally drove off the attackers. His company commander, Major Shaun Chandler, gave him a hearty slap on the back and asked him how he was, to which Pun simply replied “I’m fine.” In all, Sergeant Dipprasad Pun, one-man Gurkha army, had single-handedly held off an estimated 30 Taliban fighters and killed three, in the process setting off 250 machine gun rounds and 180 rifle rounds, 17 grenades, and one mine. About the only weapon he didn’t use was a kukri, the traditional Gurkha fighting knife – but only because he didn’t have one on him at the time. As his battalion commander, Lieutenant Colonel Gez Strickland, later remarked:

“My battalion have done two tours in Afghanistan and been involved in some very difficult and fierce fighting. Dipprasad’s action is the bravest I have seen. He courageously held that position despite being under attack from a hail of bullets. He saved the lives of three men as well as his own.”

In recognition of his bravery, on June 1, 2011 Sergeant Dipprasad Pun was awarded the Conspicuous Gallantry Cross, Britain’s second-highest military decoration, by Queen Elizabeth II in a ceremony at Buckingham Palace. The citation for his award read, in part:

“Sergeant Pun single-handedly fought off an enemy attack on his lightly manned position. In the dark he tackled the enemy head on as he moved around his position to fend off the attack from three sides, killing three assailants and causing the others to flee. In doing so he saved the lives of his three comrades and prevented the position from being overrun. Sergeant Pun couldn’t know how many Taliban were attempting to overcome his position, but he sought them out from all angles despite the danger, consistently moving towards them to reach the best position of attack.”

Sergeant Pun was more modest about his actions that night, stating:

“I know I’m very lucky to be alive. I didn’t think the attack would ever end, and I nearly collapsed when it was over. I did what I was trained to do.”

Though the Gurkhas now make up only a small part of the British Army, their numbers having fallen from an all-time high of 200,000 during WWII to less 3,500, they continue serve with distinction wherever they are deployed – as Dipprasad Pun’s actions of September 17, 2010 clearly demonstrate. Such feats of gallantry would appear to confirm what Field Marshal Sam Manekshaw, former Chief of Staff of the Indian Army, once said about this unique fighting force:

“If a man says he is not afraid of dying, he is either lying or he is a Gurkha.”

The weapon most closely associated with the Gurkhas is the kukri, a curved, machete-like knife originating in northern India and Nepal. Over the years, numerous myths have grown up around this legendary weapon, the most common being that once drawn, the kukri cannot be sheathed until it has drawn blood. According to this myth, if a Gurkha is unable to draw another’s blood, he will instead cut his thumb before sheathing the blade. However, this notion is undermined by the fact that the kukri is not exclusively used as a weapon. In fact, in India and Nepal the kukri is widely used as an all-purpose utility knife for chopping wood and preparing food; if everyone were to cut themselves after every minor task, it would surely lead to a nationwide epidemic of anemia.