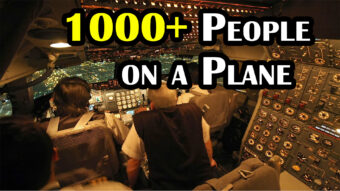 The Boeing 747 is among the most iconic and celebrated aircraft in history. Since first taking to the skies in 1969, the world’s first “Jumbo Jet” has become synonymous with luxury and reliability in air travel, the more than 1,500 aircraft produced having carried over 4 billion passengers over the last 50 years. But sadly the reign of the venerable “Queen of the Skies” is slowly coming to an end as more and more airlines trade in their ageing fleets for newer, more fuel-efficient designs. In July 2016, Boeing announced that it would no longer produce passenger versions of the 747, but would continue manufacturing cargo variants until 2022, whereupon the production line would finally be shut down. But while newer airliners such as the Airbus A380 and Boeing’s own 787 Dreamliner have surpassed the 747 in range, fuel efficiency, and passenger capacity, the old Jumbo Jet holds one aviation record that is unlikely to be broken anytime soon. On May 24, 1991, an El Al 747 took off with an astounding 1,088 people on board – the largest number of passengers ever carried by a single aircraft. This incredible feat was carried out as part of Operation Solomon, a daring Israeli mission to rescue the Jews of Ethiopia.

Ethiopia is home to one of the oldest Jewish communities in the world, known as Beta Israel or the Falashas. According to Ethiopian tradition the Falashas are the descendants of Israelite tribes who came to the region around 1000 B.C. with Menelik I, the first emperor of Ethiopia and the supposed son of the Biblical King Solomon and the Queen of Sheba. Modern anthropologists, however, place the arrival of the Ethiopian Jews closer to 600 B.C. Occupying what are now the northern Ethiopian states of Amhara and Tigray, over the following 3,000 years the Falashas were subjected to numerous periods of religious persecution, with many Jews being forcibly converted to Christianity during the Axumite period of 80 BC to 825 AD and by the emperors of the Solomonic dynasty. Despite this, due to the Falashas’ isolation from other Jewish communities, it was not until the mid-19th Century that Zionism began to take root in Ethiopia. In 1849, the Jewish leadership in Ethiopia sent a delegation to Jerusalem to make contact with the Jewish authorities there and discuss the Aliyah – or return – of Beta Israel to the Holy Land. Twenty years later in 1969, monk Abba Mehari attempted the first mass Aliyah of Ethiopians to Jerusalem, but most of his followers died of disease along the way.

But the greatest danger to Beta Israel came in 1974, when the government of Emperor Haile Selassie I was deposed by the Derg, a Marxist-Leninist military junta lead by Colonel Mengistu Haile Mariam. Soon after taking power, Mengistu unleashed the Qey Shabir or Red Terror, a regime of violent political repression aimed at eliminating rival revolutionary groups such as the Ethiopian People’s Revolutionary Party and Tigray People’s Liberation Front and consolidating the Derg’s control over the country. Between 1976 and 1977, an estimated 750,000 Ethiopians were tortured and murdered as part of the purge. At the same time, the Derg imposed disastrous economic and agricultural reforms, including land collectivization, the resettlement of over 600,000 rural Ethiopians from the northern highlands, confiscating grain from areas with high rebel activity, and redistributing it in cities to keep urban populations loyal. These policies, coupled with severe droughts, led to a series of  devastating famines between 1983 and 1985 which killed over 1.2 million people and displaced 2.5 million more. Among the worst affected by the nearly two-decade-long civil war were the Falashas. Politically, Mengitsu and the Derg aligned themselves with the Soviet Union against the Western powers – and, by extension, the state of Israel. This, along with the Derg’s general anti-religious sentiment, led to Beta Israel being specifically targeted for political repression, with open religious practice, the teaching of Hebrew, and emigration from Ethiopia being banned. The plight of the Falashas soon came to the attention of the Israeli government, who began evaluating a possible rescue mission.

The 1950 Israeli Law of Return grants every Jewish person in the world the right to make Aliyah and become an Israeli citizen. In the 1970s, however, there was considerable debate among Israeli authorities whether the Falashas even counted as part of the Jewish diaspora. Having lived in isolation from other Jewish traditions for at least 2,000 years, the Falashas practiced a form of Judaism known as Haymanot, considered so different from Rabbinic Judaism that in 1973 the Israeli Ministry of Absorption issued a report declaring the Ethiopian Jews to be entirely foreign to Israeli Jews and thus not eligible for Aliyah. Shortly thereafter, however, Ovadia Yosef and Schlomo Goren, chief Rabbis of the Sephardi and Ashkenazi sects, issued proclamations declaring the Falashas to be legitimate descendants of the Israelites. These proclamations became official government policy when Prime Minister Menachem Begin came to power in 1977, and plans to evacuate Beta Israel from Ethiopia finally began in earnest.

As Israel had no formal diplomatic relations with Ethiopia, the Israeli Intelligence Service, Mossad, instead contacted the government of neighbouring Sudan. While the President of Sudan, Gaafar al-Numeiry, was no friend of Israel, he nonetheless agreed to establish a series of refugee camps along the border from which Ethiopian Jews could be evacuated to Israel. Between 1977 and 1984 over 8000 Falashas made the treacherous journey on foot from northern Ethiopia to the Sudanese border, with nearly 4,000 dying on the way due to disease, starvation, and banditry. At first the refugees were evacuated by the Israeli Navy, which ferried them to the remote Red Sea village of Arous, which Mossad had converted into a fake holiday resort as cover for the operation. But as more and more people arrived at the border it became clear that this method would be too slow to evacuate everyone before they died of disease in the camps. A massive airlift was thus proposed. However, there was a problem: as a member of the Arab League, Gaafar al-Numeiry could not be seen as aiding Israel, and while the initial evacuations had been easy to keep quiet, a large-scale airlift would require the full cooperation of the Sudanese military and intelligence services. Israel thus turned to the United States, which had a close relationship with al-Numeiry’s government. In June 1984 a representative from Sudan met with Richard Krieger and Ambassador Eugene Douglas of the U.S. State Department to ask for aid to prop up Sudan’s faltering economy. Sensing an opportunity, Krieger decided to exploit the representative’s anti-semitism in order to make the aid contingent upon Sudan’s cooperation with Israel. Claiming that congressional approval for aid was subject to approval by the omnipotent “Jewish Lobby,” Krieger suggested to his guest that evacuating the Ethiopian Jews would go a long way towards swaying public opinion, adding:

“Besides, these people are nothing but a burden on the Sudan.”

The ploy worked, and the airlift, codenamed Operation Moses, began on November 21, 1984. The evacuation was carried out using Boeing 707s belonging to Belgian carrier Trans European Airlines. As TEA had been widely used for years by Muslim pilgrims travelling to Mecca, their presence in Sudan would not arouse suspicion. Every night for 36 days, groups of 220 refugees were driven by bus to Khartoum, from where they were flown to Brussels and then on to Tel Aviv.

Inevitably, news of the operation leaked out, and on January 5, 1985, under pressure from other Arab League members, al-Numeiry was forced to put an end to the airlift. In total, Operation Moses evacuated 7,800 Ethiopian Jews to Israel. But hundreds more remained in the Sudanese camps living in squalid conditions. This time around, it was the Americans who would take the leading role in evacuating them. While US diplomats managed to convince al-Numeiry to resume the airlift, to avoid further controversy he insisted upon a one-shot military operation rather than the protracted approach of Operation Moses. The US Government agreed, and after releasing $15 million in aid to Sudan, preparations for a second airlift, codenamed Operation Joshua, began. At midnight on March 28, 1985, six US Air Force C-130 Hercules transports, flying from Eilat Air Force Base in Israel, landed at a secret airstrip eight miles outside the Sudanese town of Gedaref. While the Air Force had prepared to evacuate up to 2,000 refugees, only 494 remained in the camps, so three of the transports returned from Sudan empty. By 9 AM all the refugees had been safely evacuated back to Eilat, where they were personally greeted by Israeli Prime Minister Simon Peres.

While Operation Moses and Joshua had been stunning successes, tens of thousands of Jews still remained in Ethiopia, and as Tigrean rebels pushed closer to the capital of Addis Ababa and the Mengistu Government faced imminent collapse, their situation grew increasingly precarious. After nearly a decade of barring the Ethiopian Jews from emigrating, in November 1990 Mengistu finally relented in exchange for $35 million in cash and arms from Israel. When in early 1991 the rebels finally took the capital and forced Mengitsu to flee, the Israeli government of Yitzhak Shamir launched Operation Solomon, the last and largest of the Aliya airlifts.

35 aircraft took part in Operation Solomon, consisting of Military C-130 Hercules transports and Boeing 707 and 747 airliners from Israeli carrier El Al. While the evacuation was originally intended to take place over 10-15 days, this was shortened to 48 hours when it became clear that any delay would allow the rebels to hold the Falashas as bargaining chips in international negotiations. In the end, however, the entire operation took less than 36 hours. Between May 24 and 25, 1991, the 35 aircraft made 40 non-stop flights between Addis Ababa and Tel Aviv, evacuating 14,325 Ethiopian Jews to Israel. One aircraft, a Boeing 747-25C registration number 4X-AXD, made history by making the 2,575 km flight with over 1,000 people aboard – the largest number of passengers ever carried by a single aircraft. Sources vary on the exact number, with reported figures ranging from 1,078 to 1,122 – including two babies born during the flight. But even the lowest reported figure is more than twice the 747’s maximum capacity of 524 – and greater even than the Airbus A380’s maximum capacity of 853. This was made possible by removing all of the aircraft’s seats, and by the fact that the starving refugees were considerably lighter than the average airline passenger and carried no luggage other than cooking utensils and the clothes on their backs.

While the evacuation gave the refugees a chance at a brand-new start, for many life in Israel has failed to live up to its promise. Many evacuees, coming from poor agricultural villages without electricity or running water, found adapting to modern Israeli society difficult, and with little education and low literacy rates, large numbers of Falashas were forced to spend years in Government-run Absorption Centres learning Hebrew and being retrained for the technological economy – only to face stiff competition from native Israelis for jobs. Today, the nearly 135,000 Ethiopians living in Israel are among the poorest in the country, earning 30-40% less than the average Israeli citizen and suffering from unemployment rates as high as 65%. Racism and discrimination against Falashas are also widespread. Up until the mid 1990s, Israeli blood banks threw out blood donated by Ethiopians for fear of AIDS contamination, while a 2013 report by Israeli news agency Haaretz claims that for years the Israeli Government carried out a program of forced sterilization on Falasha women. In July 2019 these tensions reached a boiling point when the shooting of 19-year old Solomon Teka by an off-duty Israeli police officer sparked mass protests across the country. Thus while after nearly 3000 years Beta Israel has finally been reunited with its ancestral land, its future remains as uncertain as ever.

Calder, Simon, Boeing 747 at 50: Everything You Need to Know About the Jumbo Jet, The Independent, February 10, 2019, https://www.independent.co.uk/travel/news-and-advice/boeing-747-50-aniversary-50-years-old-jumbo-jet-ba-british-airways-virgin-atlantic-first-flight-crash-a8771026.html

On This Day: Operation Moses Suspended, The JC, https://www.thejc.com/on-this-day-operation-moses-suspended-1.20353