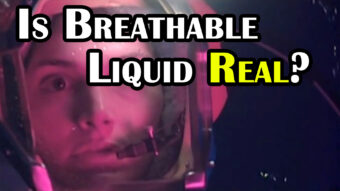 At the end of James Cameron’s 1989 underwater thriller The Abyss, oil rig diver Bud Brigman, played by Ed Harris, dons an experimental diving suit in which instead of air he breathes a special oxygenated liquid. This allows him to avoid the lethal effects of extreme water pressure and descend to the bottom of a deep ocean trench to defuse a nuclear warhead. While certainly a memorable plot device, surely such a technology is pure science fiction, right?

Well, not as much as you might think. The breathing fluid depicted in the film, oxygenated perfluorocarbon, actually exists, and while scenes with the diving suit were filmed with Ed Harris holding his breath, an earlier scene in which a rat is immersed in breathing fluid was filmed for real. While The Abyss is certainly the most famous depiction of liquid breathing, the technology has been experimented with for over a century, and while it might not be quite ready for use in deep-sea diving, it may have lifesaving applications in the field of medicine.

The first experiments with liquid breathing were conducted shortly after the First World War, when doctors began investigating the use of oxygenated saline solutions to help heal the lungs of soldiers damaged by poison gas. But it was not until the height of the Cold War in the late 1950s that research truly began in earnest, as the US Navy sought ways of allowing sailors to escape a sinking submarine without suffering from decompression sickness.

Decompression sickness, also known as The Bends, is a condition that results from breathing air at pressure. As a diver descends and the water pressure increases, more and more Nitrogen from the air becomes dissolved in their tissues. If they then ascend too rapidly to the surface, the sudden drop in pressure causes this Nitrogen to come out of solution, forming tiny bubbles that can cause severe joint pain, air embolisms, strokes, and death. Consequently, divers must ascend slowly and make frequent decompression stops to allow Nitrogen to be gradually released from the body. But if instead of air a diver or escaping submariner could breathe an oxygenated liquid, then the pressure inside and outside the lung would be equal, preventing Nitrogen buildup and the need to decompress. Liquid breathing would also help reduce or eliminate other hazards of deep diving, including Nitrogen Narcosis or “Rapture of the deep”, an alcohol-like intoxication caused by breathing Nitrogen under pressure. Oxygen itself also becomes dangerous below a certain depth, a phenomenon known as oxygen toxicity. To avoid these effects, divers use various breathing gas mixtures such as Heliox or Trimix which dilute the Oxygen and Nitrogen with Helium. But even this only works up to a point, as below around 160 metres breathing Helium induces severe tremors and other neurological effects known as High Pressure Nervous Syndrome. As a result, the deepest any diver breathing pressurized gas has been able to descend is 701 metres – and even then only in a land-based diving chamber.

In 1962 a team lead by Dr. Johannes Klystra at Duke University succeeded in getting mice and other small animals to breathe an oxygenated saline solution pressurized to 160 atmospheres – the high pressure being necessary to dissolve sufficient oxygen in the fluid. But while respiration was sustained in this manner for around an hour, the animals died soon after of respiratory acidosis – AKA carbon dioxide poisoning. This revealed one of the major shortcomings of liquid breathing which has plagued researchers ever since: while breathing fluid can easily deliver sufficient oxygen to the body, it is far less efficient at removing exhaled carbon dioxide. In order to prevent acidosis, the average human would have to move 5 litres per minute of breathing fluid through their lungs while resting and 10 litres per minute to perform any sort of physical activity – a flow rate human lungs are not capable of sustaining for any length of time. Any practical fluid breathing system would thus have to actively pump fluid in and out of the lungs, like the mechanical ventilators used in hospitals.

In 1966 American researchers Leland Clark and Frank Gollan made a breakthrough in liquid breathing research by replacing Klystra’s oxygenated saline with an exotic liquid called perfluorocarbon or PFC. First developed as part of the Manhattan Project during the Second World War, PFC is a colourless liquid composed of the elements carbon and fluorine. The bond between these two elements is among the strongest in nature, making PFC unreactive and biologically inert. It has twice the density of water but a quarter the viscosity and can hold nearly 20 times as much oxygen and carbon dioxide as water – properties which make it ideal as a breathing fluid. Clark and Gollan’s early experiments involved simply immersing rats and mice in oxygenated PFC and allowing them to breathe naturally. While the high density of the fluid made breathing difficult, the animals were able to survive fully immersed for up to 20 hours without any ill effects. Larger animals required the use of forced ventilation to prevent carbon dioxide buildup, but experiments on anaesthetized dogs further demonstrated the viability of PFC as a breathing fluid.

Clark and Gollan’s work on PFC was soon taken up by Klystra, who between 1969 and 1975 conducted one of the most comprehensive studies on liquid breathing in history, using both animals and humans as test subjects. In the course of this research, US Navy diver Francis J. Falejcyk became the first human to breathe both oxygenated saline and PFC. Despite receiving no medication except for local anaesthesia to facilitate intubation, Falejcyk did not find the experience overly uncomfortable, though they encountered difficulty draining the fluid from his lungs and he developed pneumonia as a result. In 1971 Falejcyk delivered a lecture on his experiences which was attended by a then 17-year-old James Cameron, inspiring him to write a short story that would eventually become the screenplay for The Abyss. Klystra’s research concluded that a human could breathe PFC for up to an hour without suffering carbon dioxide poisoning provided they didn’t overly exert themselves, making liquid breathing a viable method for escaping a sinking submarine. For more physical applications, Klystra also experimented with emulsions of PFC and Sodium Hydroxide which could more readily absorb carbon dioxide from the bloodstream. Ultimately, however, none of these techniques ever saw practical use in real world scenarios. The Navy SEALs reportedly experimented with liquid breathing in the early 1980s, but found breathing PFC so strenuous that several divers suffered rib sprains and fractures from the effort during testing exercises.

One proposed solution to the acidosis problem is to fit divers with a venous shunt device that scrubs carbon dioxide directly from the bloodstream. Unfortunately, the medical and logistical issues inherent in such a device are fairly obvious, and liquid breathing still has a long way to go before it becomes a viable technique for deep-sea diving. It may, however, have an important role to play in medicine, especially in the care of premature infants.

Our lungs contain around a half a billion alveoli, tiny sacs of tissue through which oxygen is absorbed into the bloodstream. To prevent these from collapsing in on themselves like a wet paper bag, the body produces a substance called pulmonary surfactant, a mixture of lipids which reduces the surface tension of water and allows the alveoli to remain open. Premature babies, however, are incapable of producing sufficient amounts of surfactant, and as soon as they are born most of their alveoli collapse, making it difficult for them to breathe. While traditional mechanical ventilators have been used for decades to help premature infants breathe, the high pressures produced by these machines can severely damage their delicate lungs. But by flooding the lungs with breathing fluid, liquid ventilation recreates the conditions found in the womb and allows the alveoli to open up, greatly increasing gas exchange. The technique also provides a convenient means of administering medication directly to the lungs.

Neonatal liquid ventilation was first pioneered by J.S. Greenspan at Temple University Hospital in Philadelphia, who in 1989 placed 13 premature infants on liquid ventilators for between 24 and 96 hours. All were successfully weaned back to breathing air, and of the 13 these 11 showed marked improvement in lung function, though six later died of causes unrelated to the experiment. A similar study conducted by R.B. Hirschl in 1995 on 19 adult, paediatric, and neonatal patients similarly confirmed the viability of liquid ventilation, with 11 of the 19 patients surviving with improved lung function.

However, the equipment required to carry out full liquid ventilation was found to be overly complex and expensive, so in 1991 B.P. Fulman developed a simpler technique known as partial liquid ventilation, or PLV. In PLV, the lungs are only partially filled with breathing fluid, the rest being supplied with air via a regular mechanical ventilator. This allows the breathing fluid to open up around 40% of the lung’s alveoli while allowing for more efficient removal of carbon dioxide. Another proposed technique involves administering breathing fluid as an aerosol mixed with air or oxygen, which produces similar results while being far more comfortable for patients than breathing straight fluid. And in 1995 Mike Darwin and Steven Harris demonstrated the application of liquid breathing to the induction of therapeutic hypothermia. This refers to the cooling of the human body following cardiac arrest to slow the onset of brain and other tissue damage. By perfusing the lungs with chilled PFC, Darwin and Harris achieved a cooling rate of 0.5 degrees Celsius per minute – faster than any existing technique. As a result of these and other breakthroughs, the FDA has granted liquid perfusion “fast-track” development status in order to bring this potentially lifesaving technology to patients as quickly as possible.

So while James Cameron won’t be able to reach the Marianas Trench without a fancy submarine for some time to come, he can at least take comfort in the fact that the technology which so inspired him as a teenager may one day save millions of lives.

Taylor, Jerome, Into the Abyss: The Diving Suit That Turns Men Into Fish, The Independent, November 20, 2010, https://www.independent.co.uk/news/science/abyss-diving-suit-turns-men-fish-2139167.html