The Curious Case of the Cat that was Turned Into a Living Telephone FOR SCIENCE!!! 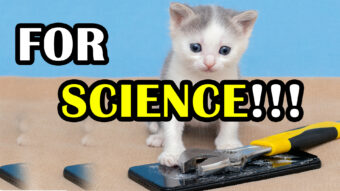 The domestication of Felis catus, AKA the common house cat, began around 10,000 years ago, when their skill at hunting rats, mice, and other vermin was seemingly first taken heed to. Since then cats have enjoyed a rather comfortable relationship with humanity, even being revered by the Ancient Egyptians as representatives of the goddess Bastet. But history hasn’t all been catnip and MeowMix; in the Middle Ages, it was believed that cats were the familiars of witches and responsible for spreading the Black Death, leading to millions being slaughtered. Indeed, the superstition that black cats are unlucky has followed them all the way to the present day, with black cats being statistically less likely to be adopted from animal shelters. And then there was the time a pair of Princeton researchers turned a cat into a living telephone – FOR SCIENCE!

This bizarre experiment was the brainchild of Professor Ernest Glen Wever, a major pioneer in the field of audiology. Born in 1902 in Benton, Illinois, Wever obtained his PhD in Experimental Psychology from Harvard in 1926 before joining the faculty of UC Berkeley and then the Department of Psychology at Princeton. Interestingly, Wever’s graduate studies were not in auditory but rather visual perception, his work focusing on how the brain distinguishes between the figure and ground in images. In the course of this research, however, Wever became interested in how the auditory centres of the brain distinguish between useful signals and background noise, and began a partnership with Bell Telephone Laboratories that would soon set him down a highly-successful career path.

In 1929, Wever and his research assistant Charles William Bray were investigating how the ear and the brain encode audio signals into nerve impulses. The dominant theory at the time held that the frequency of impulses in the auditory nerve was proportional to the intensity of the auditory stimulus. Wever and Bray, however, believed that the nerve impulse frequency closely replicated the frequency of the stimulus, much like the signal in a telephone line; hence this view became known as the “telephone theory” of audio encoding. In order to test this theory, Wever and Bray decided to take the unorthodox approach of turning a cat into a living telephone.. After sedating the unfortunate animal, they removed a section of its skull and wrapped an electrode around one of its auditory nerves. The signal from the electrode was passed through a vacuum-tube amplifier and a shielded cable to a telephone receiver in a soundproof room 50 feet away. As Bray spoke into the cat’s ear, Wever listened at the receiver and noted the sounds picked up by the electrode.

To the pair’s astonishment, the signals detected from the cat’s auditory nerve were remarkably clear, almost as if they had been produced by a mechanical telephone transmitter. As Wever later noted: “Speech was transmitted with great fidelity. Simple commands, counting and the like were easily received. Indeed, under good condition the system was employed as a means of communication between operating and sound-proof rooms.”

To ensure that no other mechanism was responsible for generating these signals, Wever and Bray varied the conditions of the experiment, placing the electrode in tissues adjacent to the auditory nerve and restricting blood flow to the cat’s brain. In every case transmission abruptly stopped, confirming that the signals were indeed coming from the auditory nerve. The pair even took the extreme step of killing the cat, with Wever clinically noting: “After the death of the animal the response first diminished in intensity, and then ceased.”

Wever and Bray published their findings in a paper titled The Nature of the Acoustic Response: The Relation Between Sound Frequency and Frequency of Impulses in the Auditory Nerve, which appeared in the Journal of Experimental Psychology in 1930. Their unorthodox study provided compelling evidence for the telephone theory of audio encoding, and lead to the pair being awarded the Howard Crosby Warren Medal by the Society of Experimental Psychologists 1936.

Wever and Bray would go on to enjoy long, illustrious careers, with Bray becoming an Associate Professor of Psychology at Princeton, an Associate Research Director for U.S. Air Force Human Resources Research, and a leading civilian psychological researcher for the National Defence Research Council and the U.S. Navy. He died in 1982 at the age of 78.

Meanwhile, Ernest Wever served as a consultant for the National Defence Research Committee on anti-submarine warfare during WWII, where he discovered that men with musical training made superior sonar operators regardless of which instrument they played. After the War he became one of the leading authorities on human hearing, publishing the definitive monograph on the subject, The Theory of Hearing, in 1949. Among his greatest contributions to the field was the development of the volley theory of frequency coding. This was based on an observation made during the telephone cat experiments that the frequency of many perceivable sounds exceeds the maximum known firing frequency of nerve cells. Wever postulated that at these frequencies the entire signal is not carried by single nerve fibres but rather by clusters of nerves firing in “volleys.” Later in his career Wever became interested in the evolution of vertebrate hearing, and in 1967 established a research zoo at Princeton featuring various species of birds, fish, reptiles, amphibians, and even dolphins airlifted from Florida. This research yielded two more definitive texts: The Reptile Ear in 1978 and The Amphibian Ear in 1985. After a productive career spanning more than six decades, Ernest Wever died in 1991 at the age of 89.

Wever and Bray’s most infamous experiment, however, would go on to have a legacy all its own. Shortly after the publication of their 1930 paper on the cat telephone experiments, it was discovered that several of their major conclusions were in fact mistaken. A 1932 experiment by Hallowell Davis revealed that the signals Wever and Bray had picked up were generated not by the auditory nerve but rather by the cochlea, a spiral-shaped structure in the inner ear. In fact, the signals in the auditory nerve are so compressed and distorted that decoding them into comprehensible speech would have been all but impossible. Nonetheless, the discovery of the so-called “cochlear microphonic”, whose frequency closely mirrors that of the sound being perceived, was to have major repercussions in the field of audiology, eventually leading to the creation of the cochlear implant by French inventors André Djourno and Charles Eyries in 1957. Cochlear implants work by using a microphone to generate an electrical signal which directly stimulates the cochlear nerve, bypassing damaged or diseased parts of the ear and allowing people with certain kinds of auditory impairment to regain part of their hearing. As of this writing, more than 180,000 people worldwide have benefited from this technology; but whether this was worth turning a cat into a telephone…well, we’ll let you decide.

According to Robert Wallace, former Director of the CIA’s Office of Technical Services, the project was inspired by a surveillance operation targeting an unnamed Asian head of state, during which cats were observed to wander in and out of the target’s meeting area unnoticed. It was thus decided that cats would make an ideal platform for carrying hidden microphones. To this end, several unfortunate animals were subjected to a gruesome surgery in which a microphone was implanted in their ear canal, a miniature radio transmitter and battery pack in their ribcage, and a fine antenna wire carefully woven into their fur from head-to-tail.

Almost immediately, however, the program ran into difficulties. As any cat owner can tell you, cats are independent-minded creatures and not easily trained, and despite claims by Bob Bailey, the CIA’s main animal trainer, that “we never found an animal we could not train,” convincing the cats to seek out and linger around secret conversations proved harder than anticipated, the animals being easily distracted by hunger and other natural impulses. The CIA was thus forced to perform additional surgeries to eliminate the cats’ sensation of hunger, and according to some sources achieved some success in using primitive brain stimulation devices to guide the cats via remote control.

The first Acoustic Kitty mission was carried out against two diplomats sitting in a park outside the Soviet embassy in Washington D.C. Sources vary on what happened next, with most versions of the story claiming that upon being released from the surveillance van, the cat was immediately run over by a taxi and killed. Robert Wallace disputes this, however, claiming that the handlers were simply unable to get the cat to reach the target, and that: “…the equipment was taken out of the cat; the cat was re-sewn for a second time, and lived a long and happy life afterwards.”

Further tests confirmed the concept to be unworkable, and Acoustic Kitty was cancelled in 1967 at a total cost of $20 million. The heavily-redacted report on the project, titled Views on Trained Cats, concluded that while: “… cats can indeed be trained to move short distances…the environmental and security factors in using this technique in a real foreign situation force us to conclude that for our purposes, it would not be practical.”