The Curious Case of Exploding Whales 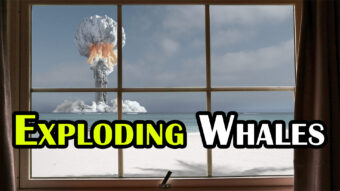 Whales are among the largest animals to have ever lived, with the Blue Whale, at a whopping 173 metric tons, holding the absolute record. Thus, the rare occasions when a dead whale washes ashore tend to cause massive headaches for the local population and authorities, not only due to the massive bulk and nauseating smell, but also the alarming tendency of whale carcasses to explode. Like most animals, as soon as a whale dies the bacteria in its gut begin to digest it from the inside, leading to a buildup of gas that causes the corpse to swell up and eventually burst. This is exactly what happened on January 29, 2004, when a 17-meter Sperm Whale washed ashore at Tainan City, Taiwan. The animal was lifted onto a trailer and was being driven to the Sutsao Wildlife Reservation Area for necropsy when it suddenly exploded in the middle of a busy city street, showering some 600 onlookers in blubber, blood, and whale guts. But not all whale explosions are caused natural processes; one bizarre incident in 1970 involved rather more human intervention, and would, for better or worse, help put a small Oregon town on the map.

On the morning November 9, 1970, beachcombers near the town of Florence – 200 kilometres south of Portland – stumbled upon a leviathan: a 14-metre long, 7 ton Sperm Whale carcass that had washed ashore the night before. While the massive corpse quickly attracted a crowd of curious onlookers, they were just as quickly repelled by the rapidly-worsening smell, and the local authorities were called in to deal with the problem. Curiously, at the time beaches fell under the jurisdiction of the Oregon Highway Division, who placed 41-year-old engineer George Thornton in charge of the cleanup. According to Thornton, he was only appointed because his supervisor, district engineer Dale Allen,

“…took off hunting when this thing broke – conveniently, I think. To be fair, they had already planned on going, but this thing made them all the more anxious to go.”

Left holding the bag, Thornton set about determining how best to dispose of the reeking mountain of blubber. The corpse couldn’t be buried as the tide would quickly uncover it, and it was too large to burn. Nor could it be simply cut apart, for the simple reason that no volunteers could be found to do so. After consulting with the US Navy, Thornton finally settled on a solution: dynamite. The idea was to blow the corpse into smaller, more manageable pieces that could then be cleaned up crabs, seagulls, and other marine scavengers.

But how much dynamite to use? As no formal guidelines for this kind of operation existed, Thornton was forced to use his intuition and eventually settled on 20 cases – or around half a ton. But as luck would have it, on the beach that day was local gun store and range owner Walter Umenhofer. Umenhofer, who had received explosives training during WWII, informed Thornton that 20 cases was far too much, and that 20 sticks – or around 4 kg – would be sufficient. But Thornton was none too keen on a bystander telling him how to do his job, and Umenhofer’s advice was ignored In an interview 25 years later Umenhofer stated:

“But the guy says, ‘Anyway, I’m gonna have everyone on top of those dunes far away.’ I says, ‘Yeah, I’m gonna be the furtherest SOB down that way!’”

The blast was set for the afternoon of November 12, and a crowd of around 75 bystanders gathered to watch from the nearby dunes. Covering the event were cameraman Doug Brazil and anchor Paul Linnman of KATU-TV Portland, whose broadcast was soon to become legendary. The dynamite went off at 3:45 PM, sending a fountain of smoke and blood 100 feet into the air, which Linnman described as resembling “a mighty burst of tomato juice.” In Brazil’s footage, the spectators can be heard cheering for a brief moment before, to everyone’s horror, a series of slapping sounds is heard as chunks of the carcass begin to rain down on the beach, turning, in Linneman’s immortal words:

So powerful was the blast that it sent pieces of the whale flying more than half a mile. One piece of blubber the size of a car tyre flattened the roof of a brand-new Oldsmobile belonging to none other than explosives expert Walter Umenhofer, who had purchased the vehicle at a dealership sale called – and, we can’t make this stuff up- “Get a Whale of a Deal.”

Yet despite the massive explosion the whale was still mostly intact, the dynamite having only carved out a small section of the carcass. Worse still, the seagulls which were supposed to clean up the remains were nowhere to be seen, having been frightened away by the blast. Thornton was thus forced to send in Highway Division workers with earth-moving equipment to clear away the remaining pieces and bury them elsewhere on the beach. Nonetheless, Thornton was optimistic about the operation, later stating in an interview with the Eugene Register-Herald:

“It went just exactly right, except the blast funnelled a hole in the sand under the whale.”

“I said to my supervisors, usually when something happens like this, the person ends up getting promoted. Sure enough, about six months later, I got promoted to Medford.”

But the situation was best summed up by Linnman, who ended his broadcast with:

The current policy of the Oregon State Parks Department regarding beached whales is to bury them on-site or, if the sand is too shallow, to relocate them to another beach.

The exploding whale of Florence soon became a part of Oregon folklore, and as the years passed the incident began to be regarded as little more than an urban legend. But the story took on a life of its own two decades later when it came to the attention of humorist Dave Barry, who recounted it in a May 20, 1990 edition of his column in the Miami Herald. The article, titled “The Far Side Comes to Life in Oregon,” contains such gems as:

“The responsibility for getting rid of the carcass was placed upon the Oregon State Highway Division, apparently on the theory that highways and whales are very similar in the sense of being large objects.”

“There was no sign of the sea gulls, who had no doubt permanently relocated in Brazil.”

“But this is no time for gaiety. This is a time to get hold of the folks at the Oregon State Highway division and ask them, when they get done cleaning up the beaches, to give us an estimate on the US Capitol.”

An uncredited version of Barry’s article soon began to circulate on the internet, leading many to believe that the incident had only recently taken place. According to Ed Schoaps, public affairs coordinator for the Oregon Department of Transportation:

“We started getting calls from curious reporters across the country right after the electronic bulletin board story appeared. They thought the whale had washed ashore recently, and were hot on the trail of a governmental blubber flub-up. They were disappointed that the story had 25 years of dust on it.”

Fifty years later, the Exploding Whale still evokes mixed feelings for those who were there. George Thornton remained convinced that the operation was a success but had been spun into a public relations disaster by hostile news reporters. When contacted by Paul Linnman in 1995 for his book The Exploding Whale and Other Remarkable Stories From the Evening News, Thornton declined to be interviewed, stating:

“Every time I talk with the media it tends to blow up in my face.”

Thornton retired from the Oregon Department of Transportation in 1990 after 43 years of service and died in 2013 at the age of 84.

While initially unimpressed by the mockery the exploding whale brought to their town, the residents of Florence eventually came to embrace the incident as a quirky part of their history, even voting in June of 2020 to name a new recreational area “Exploding Whale Memorial Park.”

Barry, Dave, The Farside Comes to Life in Oregon, Miami Herald, May 20, 1990, https://www.theexplodingwhale.com/evidence/resources/dave-barry-article

The Tale of the Exploding Whale, Xpat Magazine, September 2006, http://xpatmatt.com/the-tale-of-the-exploding-whale/

Bacon, Larry, When They Blow Up a Whale, They Really Blow it Up! Eugene Register-Guard, November 13, 1970,  https://news.google.com/newspapers id=KOdVAAAAIBAJ&sjid=IeEDAAAAIBAJ&pg=6114%2C3133152