The Anonymous Corpse that Helps Save Millions of Lives 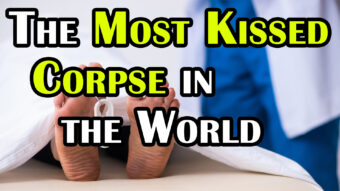 She has been called “the most kissed girl in the world,” and in the 120 or so years since her death she has certainly been among the most widely-seen. Her gently smiling face has adorned the homes and studios of some of the 20th Century’s greatest writers, artists, and thinkers, inspiring dozens of works of art and literature. And in the 1960s she gained a new lease on life, her likeness helping to save the lives of millions of people. Yet despite having one of the most recognizable faces in the world, little is known woman – who she was, how she lived, how she died, or even whether she existed at all. This is the story of the strange afterlife of L’Inconnue de la Seine – the unknown body of the Seine.

One day in the 1880s the body of a young woman was pulled from the River Seine near the Quai du Louvre in Paris. According to custom, she was taken to the city morgue behind Notre Dame Cathedral and laid out on one of 12 marble slabs in front of a large street-facing window. Every day thousands of Parisians filed past this infamous “window of the dead” hoping to identify the remains of missing loved ones. Days passed, and no-one identified or claimed the woman’s corpse, and she was prepared for burial in a common grave. But according to legend, the morgue pathologist was so taken by her delicate beauty, her soft, enigmatic smile, that he ordered his assistant to prepare a plaster death mask of the corpse, preserving her likeness forever.

By 1900 L’Inconnue de la Seine had become a must-have object among Paris’ bohemian community, gracing the studio walls of such luminaries as writer Hertha Pauli, poet Jules Supervielle, playwright Ödön von Horvath, literary theorist Maurice Blanchot, and photographer Man Ray. The face became an object of beauty and romantic fascination, with many likening her enigmatic smile to that of the Mona Lisa and her tragic fate to Shakespeare’s Ophelia. On discovering a copy of the mask in the workshop of French sculptor Auguste Rodin in 1905, Austrian poet Rainer Maria Rilke described it as:

“…the face of the young woman, which was cast in the morgue, because it was beautiful, because it smiled, smiled so deceptively, because it knew.”

That strange smile, seemingly so at odds with the woman’s watery death, would inspire countless poems including Rilke’s own Washing the Corpse and Vladimir Nabokov’s L’inconnue de la Seine, both of which speculate as to her true identity and the tragic reasons for her death. Other works focused on the bewitching effect the mask had on contemporary artists, such as Richard la Galliene’s 1900 novella The Worshipper of the Image, in which a young artist is driven mad by his desire for L’Inconnue, and Louis Aragon’s 1944 novel Aurelien, in which a French soldier returning from the Front falls in love with a woman who reminds him of the death mask. Later artistic analyses were even more meta, examining the apparent contradiction between L’Inconnue’s anonymity and the fame and ubiquity of her face.

It wasn’t long before artists began inventing their own backstories for the mysterious corpse. Among the most successful was Reinhold Muschler’s 1934 novel One Unknown, in which L’Inconnue is given the identity of Madeleine Lavin, a young Parisian woman who falls in love with British diplomat Lord Thomas Vernon Bentick. After a brief affair, Lord Thomas leaves for Egypt with his fiancée, causing a devastated Madeleine to throw herself into the Seine. Despite being described by the Times Literary Supplement as “nauseatingly sentimental” the book was extremely popular, selling over 175,000 copies in two years and being translated into several languages.

But as with many a romantic legend, key details of the Inconnue’s story have raised serious doubts among historians, many of whom assert there is no historical basis for the legend at all. According to Helene Pinet of Paris’ Rodin Museum, police records at the time of the corpse’s supposed discovery contain no mention of a woman’s body matching L’Inconnue’s description. In fact, there is no solid written or visual record of the face until 1926, when it appeared in a printed catalogue of death masks. It is also in this catalogue that the mask first acquired its famous name. But more conclusive still are the delicate features and serene expression that made the face so famous in the first place. According to Claire Forestier of the Lorenzini Family, who have been making and selling plaster life and death masks in Paris for over 140 years, drowned corpses are almost never found with such calm expressions or flawless skin. Even suicides struggle in their last moments, leaving a distressed expression, and the face quickly begins to bloat and decompose upon immersion. Based on this, Forestier concludes that the mask was not cast from a corpse at all but rather a live subject of no older than 16. And, as it is difficult to maintain a smile under a plaster mould, the subject was likely a professional model. But whether anonymous corpse or anonymous model, the legend of L’Inconnue persisted until the late 1950s, when her curious afterlife took a rather unexpected turn.

In the 1940s, American physician James Otis Elam discovered that the breath we exhale contains enough residual oxygen to support life. At the time, Elam was working with Polio victims who due to paralysis had lost the ability to breathe independently and had to be placed in Iron Lungs. When the number of patients on the ward exceeded the number of Iron Lungs available, Elam kept them alive by applying artificial respiration. Over the next decade Elam would refine his procedure for use on drowning victims and other conditions, eventually publishing his techniques in the 1959 book Rescue Breathing. Looking to develop a training aid to help teach artificial respiration, Elam contacted Norwegian toymaker Asmund Laerdal, who had recently released a line of realistic rubber-skinned dolls. Laerdal was highly enthusiastic about the project; not only did his company already produce artificial rubber wounds for Red Cross training programs, but he himself had saved his 2-year-old- son Tore from drowning four years before.

Within a year, Laerdal had produced the prototype of the world’s first CPR training doll, which he named Rescusci-Anne. The doll featured a tilting chin, a realistic airway with inflatable lungs, a set of imitation carotid arteries in which an instructor could induce a pulse using a squeeze bulb, and an attached pressure gauge so trainees could monitor the strength of chest compressions. Realizing that male trainees would be reluctant to put their lips on a male face, Laerdal decided to make the doll female, and recalling the strangely beautiful plaster mask hanging in his grandparents’ house, used the immortal likeness of L’Inconnue de la Seine as the basis for Rescusci-Anne’s face. Rescusci-Anne made her world debut in September 1960 at the First International Symposium on Resuscitation in Stavanger, Norway. In the years since, the doll and its many descendants have helped train millions of people in lifesaving techniques, leading L’inconnue to be dubbed “the most kissed face in the world.” The Laerdal Company, which still produces first aid training devices, embraces its connection to the famous turn-of-the-century enigma, stating in its official literature:

“Because she has no name and remains an enigma, we can never reach her and taint her…we project our own dreams onto her.”

Yet despite this new lease on life, more than 120 years after her supposed death L’Inconnue continues to inspire artists. When Rescisci-Anne was first introduced, the standard CPR training course instructed trainees to approach the doll and call out “Annie…Annie are you Okay?” This phrase became so well known it formed the basis for the chorus of Michael Jackson’s 1987 hit song Smooth Criminal.

Of course, we’d be remiss if mentioning CPR and lip-locking if we didn’t mention that it is no longer recommended for the layperson to give breaths to someone while doing CPR. And in fact, the individual is vastly more likely to survive if you DON’T and only do compressions. For why, see our video Top 5 First Aid Tricks Every Person Should Know written by our friendly neighborhood paramedic author.

Another suicide victim whose death inspired countless artists was 24-year-old American bookkeeper Evelyn McHale. On May 1st, 1947, McHale jumped from the 86th floor observation deck of the Empire State Building, landing on a parked car 1050 feet below. Within minutes of impact, photography student Robert Wiles, who happened to be working across the street, arrived and snapped what would become an iconic photo. The photograph shows McHale’s intact body lying embedded in the roof of the car, her clothes, gloves, hair and makeup all seemingly untouched and her face bearing a serene expression that Time Magazine Editor Ben Cosgrove described as “…downright beautiful, [as if she were] resting, napping, rather than dead…[like she is] daydreaming of her beau.” The photograph, which LIFE Magazine dubbed “The most beautiful suicide,” soon took on a life of its own, being reproduced and referenced in such works as Andy Warhol’s print Suicide (Fallen Body), the music videos for David Bowie’s Jump They Say and Radiohead’s Street Spirit (Fade Out), and the album cover of Pearl Jam’s Backspacer – among others.

But the iconic status of the photograph has all but overshadowed the very real person behind it. The day before her suicide, McHale travelled to Easton, Pennsylvania to visit her fiancé, college student Barry Rhodes. As Rhodes would later recount, “When I kissed her goodbye, she was happy and as normal as any girl about to be married.” Yet on the observation deck McHale left a suicide note which paints a picture of a young woman struggling with issues of self-worth, anxiety about the future, and perhaps a family history of mental illness:

“I don’t want anyone in or out of my family to see any part of me. Could you destroy my body by cremation? I beg of you and my family – don’t have any service for me or remembrance for me. My fiance asked me to marry him in June. I don’t think I would make a good wife for anybody. He is much better off without me. Tell my father, I have too many of my mother’s tendencies”

Despite her intact appearance, McHale’s body reportedly more or less fell apart when moved, her insides having mostly liquefied on impact. She was identified by her sister Helen and, according to her wishes, cremated and her ashes scattered without ceremony.

Named by Life Magazine as “The Most beautiful Suicide,” Evelyn McHale Leapt to Her Death From the Empire State Building, 1947. https://rarehistoricalphotos.com/beautiful-suicide-evelyn-mchale-leapt-death-empire-state-building-1947/