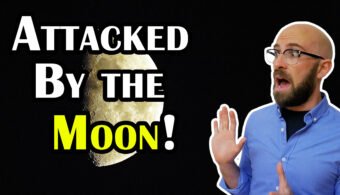 On October the 4th, 1957, the Soviet Union launched Sputnik 1, the world’s first artificial satellite, into orbit. This event sent shockwaves through the United States defence establishment. Not only did Sputnik demonstrate that the Soviets were more technologically advanced than anyone had imagined, but it announced that they now possessed long range ballistic missiles capable of reaching any target in the mainland United States – missiles that could carry nuclear warheads.

Over the previous decade, the United States had spent billions of dollars building a sophisticated aerospace defence system to detect, track, and shoot down incoming Soviet nuclear bombers. This included three chains of early warning radars – the Pine Tree, Mid-Canada, and Distant Early Warning or DEW Line – squadrons of interceptor aircraft and surface-to-air missiles, and the building-sized Semi-Automated Ground Environment computer, or SAGE, to coordinate the whole system. Sputnik made all this infrastructure obsolete almost overnight. Intercontinental Ballistic Missiles or ICBMs climb past the edge of space before plunging back through the atmosphere, their warheads falling on their targets at more than 20 times the speed of sound. No aircraft can intercept them, and even under ideal circumstances the target has no more than a half hour of warning before impact.

As the technology to build an effective anti-ballistic missile system did not yet exist in the late 1950s, US strategy shifted away from aerospace defence and towards the policy of Mutual Assured Destruction – or MAD – wherein if either side launched a nuclear first strike it would result in the complete annihilation of both. This strategy required maintaining a guaranteed second-strike capability. At first this was accomplished via Airborne Alert, wherein a number of nuclear-armed B-52 bombers were kept in the air at all times, protecting them and their weapons from a Soviet first strike. Later, missile technology improved to the point where ICBMs could be based in hardened underground silos or carried aboard nuclear-powered submarines, forming the three prongs of the so-called Nuclear Triad.

But before an attack could be retaliated against, it first had to be detected, and before the now-obsolete DEW line was even complete the United States Air Force began construction of a new Ballistic Missile Early Warning System. Three BMEWS sites were built at Clear Air Force Base in Alaska, RAF Fylingdales in the UK, and Thule Air Force Base in Greenland – as far north as possible to give maximum warning of an attack. Each site was equipped with three large fixed General Electric AN/FPS-50 radars for initial missile detection and a number of smaller RCA AN/FPS-49 and 92 sets for finer tracking. The system also included a number of computer facilities both on and off-site to process incoming data, which was routed to Command and Control displays at the Pentagon and NORAD’s underground headquarters at Cheyenne Mountain,Colorado. As designed, BMEWS gave NORAD commanders and the U.S. President up to 20 minutes from the detection of a Soviet missile launch in which to evaluate the threat and order a retaliatory strike.

After two years of planning and construction, BMEWS system officially became active on October 5, 1960. But no sooner had it been switched on, alarm bells started to clang as the system immediately went to High Alert. A missile launch had been detected. The acting NORAD Commander in Chief at Cheyenne Mountain that day was Colonel Robert Gould, and as he stared at the data pouring in from the Thule radars he could scarcely believe what he was seeing. The system was detecting nearly 1000 missiles fired from a site deep in Siberia, arcing their way over the North Pole towards the United States. Following protocol, Gould tried to contact NORAD Commander General Laurence Kuter, but the General was aboard an aircraft and could not be reached. Gould then phoned the next in command, NORAD Deputy Air Marshal Roy Slemon of the Royal Canadian Air Force based at RCAF North Bay. By the time Slemon was connected with Gould the BMEWS alert designation had reached Level 5, indicating near-certainty of a missile contact. Under NORAD rules of engagement, this gave Slemon the authority to order a retaliatory strike on the USSR.

But there were several things about this alert which struck Slemon as odd. While the actual radar returns indicated that the missiles were over Siberia, the computer reported them as only 3500 kilometres away. Stranger still, the computer was unable to generate an impact point prediction, and neither the Clear or Fylingdales BMEWS sites could confirm the contact. But most puzzling of all was the sheer number of missiles detected. As far as US Intelligence was aware, the total number of ICBMs in the Soviet inventory was only four. Slemon sensed a false alarm, but he couldn’t be sure. And if he hesitated too long, NORAD’s ability to launch a second strike would be annihilated.

But before Slemon would make a decision, NORAD’s chief of Intelligence, Brigadier General Harris Hull, joined the conversation. Suddenly, something occurred to Slemon, and he asked Hull a deceptively simple question: where was Nikita Khrushchev, the leader of the Soviet Union? At Hull’s answer, Slemon breathed a sigh of relief: Khrushchev was in New York, attending the United Nations. Reasoning the Soviets wouldn’t launch a massive nuclear strike on their own leader, Slemon called off the alert.

An investigation soon revealed the cause of the false alarm, which could almost be considered comical had it not nearly lead to nuclear Armageddon. On that tense October day, the brand-new, state of the art, $1.2 billion BMEWS system had detected not a swarm of Soviet missiles, but the Moon rising over Norway.

The 1960 BMEWS incident was not the last time a seemingly minor error would nearly lead to nuclear Armageddon. The high tension of the Cold War combined with the complex and tightly-wound systems of nuclear command and control created an ideal environment in which small mistakes could spiral out of control.

On 9th of Novermber, 1979, a computer at NORAD’s Cheyenne Mountain complex announced that the Soviet Union had just launched a salvo of 2,200 ballistic missiles at the United States. Strategic Air Command’s B-52 bombers were immediately readied for takeoff, and President Jimmy Carter alerted and given 7 minutes in which to order a retaliatory strike. But within minutes of the alert the individual early warning radar sites reported that they had detected no such launch. The alert was declared a false alarm, and all strike forces stood down. It was soon revealed that a memory tape containing a training simulation had accidentally been loaded into the NORAD computer, giving the impression of an actual attack.

Around midnight on the 26th of September, 1983, a Russian Oko early-warning satellite detected a single ballistic missile launch somewhere in the mainland United States, followed soon after by four more. The officer on duty that night at the Sepukhov-15 satellite bunker near Moscow was Lieutenant-Colonel Stanislav Petrov. At first, Petrov followed procedure and prepared to alert his superiors so a retaliatory strike could be launched. This was a time of great paranoia, with the Soviet invasion of Afghanistan and the American stationing of Pershing missiles in Western Europe ratcheting up Cold War tensions to unprecedented heights. But suddenly Petrov hesitated, for something didn’t seem quite right. Surely, he reasoned, any actual American first strike would involve more than just five missiles. Plus, the Oko system was brand new and known to be unreliable. Erring on the side of caution, he called up the early warning radar stations, who confirmed that no launches had been detected. Then he waited. Twenty, then thirty, then forty minutes passed, and when no missiles fell on Russia Petrov called off the alert. As it later turned out, the false alarm had been triggered by sunlight glinting off high-altitude clouds.

But probably the closest call in the history of nuclear warfare took place on the 25th of January 1995, a full four years after the collapse of the Soviet Union. On that day, an early warning radar station at Olenegorsk near Murmansk detected a small radar contact rising up from the Barents Sea and soaring north in a high ballistic arc – the distinctive signature of a Trident missile fired from an American submarine. Immediately the alarm was raised and all Russian forces were placed on high alert. In Moscow, President Boris Yeltsin was handed the Cheget, or nuclear briefcase, which contained launch codes and a radio transmitter linked to Russia’s nuclear arsenal. As Yeltsin began entering the codes, radar continued to track the missile as it rose to an altitude of 1500 kilometres and broke up into several smaller contacts, which the radar operators took to be the missile’s multiple warheads or MIRVs. While some wondered why the US had launched only a single missile, others speculated that the warhead was meant to detonate in the upper atmosphere, creating an electromagnetic pulse or EMP to disrupt Russian defence systems before the actual attack began. But despite his military advisors encouraging him to launch a retaliatory strike before was too late, Yeltsin hesitated, arguing that he needed more information. It was at this point that the missile began to drift off course, eventually falling to earth far  north of Moscow near the island of Spitsbergen. As it turned out, the object was not a missile at all but a Canadian Black Brant sounding rocket  used for studying the Northern Lights, which had been launched from the Andoya rocket range in Norway. The launch had been announced in advance to over 30 countries including Russia, but the memo had failed to reach the radar technicians. The 1995 Norwegian Rocket Incident remains the only time in history a Russian president has opened and armed the nuclear briefcase.

9 Times the World Was at the Brink of Nuclear War – and Pulled Back, Business Insider India, April 25, 2018 https://www.businessinsider.in/slideshows/miscellaneous/9-times-the-world-was-at-the-brink-of-nuclear-war-and-pulled-back/slidelist/63915672.cms