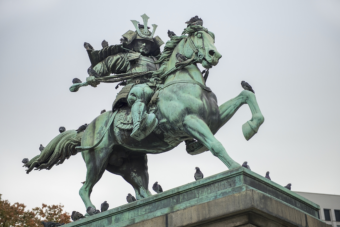 The Black Samurai, despite sounding like a name that’d be more at home in a movie or a comic book than the real world, is a genuine nickname given to a mysterious man from feudal Japan, otherwise known only as Yasuke.

The rank of samurai was, of course, considered one of great prestige and it came with a number of perks including a salary, land, a stipend of rice, servants and the ability to kill commoners who offended them without consequence. In regards to that last one, kiri-sute gomen (literally: authorization to cut and leave) was a right granted to samurai that allowed them to kill anyone of a lower rank (even other samurai of lower rank) for any perceived slight against their honor. While this has little to do with the story of Yasuke, we couldn’t not mention the fact that samurai had the ability to basically murder people without consequence, so long as a given set of restrictions was honored, such as doctors and midwives were exempt to a certain extent, that the blow had to come directly after the affront and not later, a witness to the slight was required for proof a slight was in fact made, etc. etc. But in the general case, samurai were of such high standing that dishonoring one in front of a witness was a great way to end one’s life.

Given the highly regarded position samurai enjoyed, it was seldom an honor doled out to foreigners and, as such, there are less than a dozen confirmed examples of a person outside of feudal Japan being allowed to call themselves samurai. Amongst this select group of foreigners, Yasuke not only stands out for being speculated to have been the first, but also because he was the only one who was black.

Little is known about Yasuke’s past, so little in fact that we know neither where he was born nor his original name. It’s mostly agreed that Yasuke hailed from somewhere in Africa, though which area exactly has never been conclusively established, with Mozambique mentioned most in accounts of his life. This is thanks to the Histoire Ecclesiastique Des Isles Et Royaumes Du Japon written in 1627 by one Francois Solier where he claims Yasuke was from that region. However, it’s not clear what his own source for that information was and he wrote it almost a half century after the last known direct documented evidence of Yasuke.

Whatever the case, originally believed to have been a slave captured sometime in the 1570s by the Portuguese, Yasuke was bought by and became the servant of an Italian Jesuit and missionary called Alessandro Valignano. Valignano was famed for his insistence that missionaries to Japan become fluent with the language, requiring a full two years of study in Japanese, which helped his group stand out and be more successful than others. As for Yasuke, he travelled with and served Valignano for several years until the pair made port in Japan around 1579.

Upon arriving in Japan, as you might expect Yasuke immediately became a subject of intrigue and curiosity, both because of his apparently extremely dark skin and his intimidating stature. Variously described as being between 6 feet 2 inches and 6 feet 5 inches tall, Yasuke towered over the Japanese populace of the period, with males only averaging about 5 feet tall at the time. Beyond his height, he is said to have possessed a powerful, chiselled physique. According to legend, Yasuke’s very presence inspired both terror and curiosity in locals to such an extent that several people were supposedly crushed to death in an attempt to make their way through a large crowd that had gathered to see him. Other stories tell of people breaking down the doors of the places Yasuke was staying just to catch a glimpse.

Whether any of that is true or not, sometime in 1581 while visiting Japan’s capital, Yasuke came to the attention of a man who is considered one of the people ultimately responsible for the unification of Japan, famed Japanese warlord Oda Nobunaga.  Nobunaga apparently insisted on meeting the mysterious dark-skinned stranger who was causing such a commotion in his city. Upon meeting Yasuke, according to an account by Jesuit Luis Frois, Nobunaga apparently ordered Yaskue to be roughly scrubbed with brushes to prove that his dark skin was real and not artificially done with ash, charcoal, or the like.

It’s from this first meeting that one of the only known accounts of Yasuke’s appearance comes from, with this fateful meeting documented in the Lord Nobunaga Chronicle:

On the 23rd of the 2nd month March 23, 1581, a black page (“kuro-bōzu”) came from the Christian countries. He looked about 26, 24 or 25 by Western count or 27 years old; his entire body was black like that of an ox. The man was healthy and good-looking. Moreover, his strength was greater than that of 10 men…. Nobunaga’s nephew gave him a sum of money at this first meeting.

Presumably thanks to Valignano requiring missionaries to Japan to learn Japanese, it appears at this point he also required it of Yasuke, as Nobunaga was said to have greatly enjoyed conversing with Yasuke and was intrigued to learn about his homeland. He ended up liking Yasuke so much that he eventually took him as his own, or rather officially Valignano gifted him to the warlord.

Nobunaga, who was known to have a fondness for other cultures, which is in part why he was allowing Christian missionaries to operate in the area, gave his newly found confidant the name Yasuke. Although technically still a slave in the sense that he had to serve Nobunaga, Yasuke quickly rose in stature in the eyes of Nobunaga, with Yasuke ultimately given a house, salary, and servants of his own. During his rise, he apparently served as Nobunaga’s weapon bearer and bodyguard and was otherwise seemingly treated as an equal by his peers. Yasuke was also eventually given a katana from Nobunaga, apparently conferring the title of samurai upon him as only samurai were permitted to carry such a weapon at the time. It’s also noteworthy that he wore the traditional armor of the samurai when in battle. Yasuke also had the frequent extreme honor of dining with Nobunaga, something few others were allowed to do.

Yasuke’s time with Nobunaga was cut short, however, when the warlord was betrayed by one of his generals, Akechi Mitsuhide, a year later in 1582. In a nutshell, Nobunaga was at the Honnō-ji temple in Kyoto, taking with him only a contingent of 30 pages and guards. For reasons unknown, though perhaps just a simple power grab, Mitsuhide chose to betray Nobunaga at this point, surrounding the temple and attacking. Yasuke is known to have been there and fought alongside Nobunaga, but ultimately when defeat was imminent as the temple burned around them, Nobunaga chose to commit ritual suicide rather than be captured.

Legend has it, whether true or not isn’t known, that one of Nobunaga’s last acts was to order Yasuke to carry Nobunaga’s head and sword to his son and heir, Oda Nobutada.

Whether he actually did this or not, it is known Yasuke managed to escape and joined Nobutada who himself was under attack at the time by a separate contingent of Mitsuhide’s soldiers at nearby Nijō Castle.

Nobunaga’s son was eventually defeated, committed ritual suicide, and Yasuke was captured by Mitsuhide’s men. Apparently unsure what to do with the foreign samurai, or even whether they should consider him a true samurai or not despite that he wielded the sword and wore the traditional armor, they chose not to kill him and instead left it to Mitsuhide to tell them what to do.

In the end, while there is some contention, it would seem Mitsuhide decided to dishonor Yasuke by not allowing him to commit ritual suicide and instead had him returned to the Jesuits. Whether Mitsuhide did this out of pity or contempt for Yasuke is a matter of contention, though it’s noteworthy that there was little in the way of racism towards black people in Japan at the time because so few black people ever visited the country anyway.

From here, as unlikely as it’s going to sound, Yasuke, the giant, Japanese speaking black, now ronin, samurai who supposedly caused crushing crowds wherever he went, disappeared from history, even in the Jesuit’s own accounts. This has led some to speculate that he did not stay with the Jesuits and even some speculation that, if becoming a samurai wasn’t enough, that he became a pirate after this, meaning his moniker could have potentially been not just The Black Samurai, but the ultimate in badass nicknames- The Black Pirate Samurai, though there is unfortunately no hard documented evidence that he actually became a pirate.