May 24, 2019 Karl Smallwood
Amanda D. asks: I was just wondering what would happen if you attached money instead of a stamp to a letter and tried to mail it? 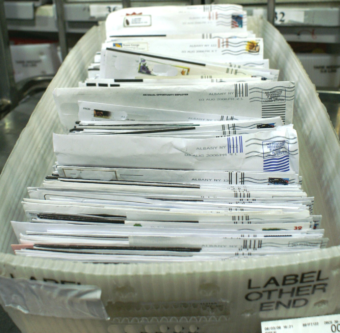 As we’ve covered before in our article on What Happens to Undeliverable Mail with No Return Address? the individuals tasked with processing mail often go above and beyond what is expected of them in their quest to ensure that every piece of mail gets to its intended destination. And, at least in the United States, it would appear that this admirable dedication to the job includes sifting through letters that have the correct postage attached to them with tape instead of a stamp.

Yes, as weird as it may sound, in the United States it is, in fact, totally possible to send a letter by simply attaching money equal to the value of the required postage for a given letter and still have it delivered. It’s also fully possible to do a hybrid of this where perhaps you needed two stamps for a given letter, but only had one, so affix one stamp and then some change to cover the rest. Unfortunately, the same does not appear to be the case in several other countries we looked at, such as the UK, or at least we couldn’t find any examples of people successfully doing this, nor stated rules that appear to allow it. In fact, in the UK taping coins to an envelope equivalent to normal postage for the letter itself even if it was processed could see whomever you were sending the letter to being charged extra because any letter more than 5mm thick qualifies as a “large letter” under Royal Mail rules and thus, requires the sender to pay slightly more for the privilege of sending it.

Moving back to Freedom Mail, to quote a the Mailing Standards of the United States Postal Service Domestic Mail Manual, part 2.3.3 Mail Collection:

Generally, mailable matter is collected from a mailbox if postage is fully prepaid or money equal to the required postage is left in the mailbox. Money in a mailbox is left at the customer’s risk. When postage or money is insufficient to cover postage, the mail is not collected, or if the sender cannot be identified, the mail is treated as unpaid mail. Mailable matter not bearing postage found in, placed on, attached to, supported by, or hanging from boxes is handled under the applicable standards.

There are some potential caveats here, however. For starters, mail with the correct postage in change attached instead of a stamp usually needs to be sorted by hand, something that will obviously result in the letter being delayed somewhat. Also, it’s noted that as much as mail workers endeavour to find and process these letters, sometimes, particularly if you dropped the letter off instead of mailed it from your own mailbox, they end up being processed by the automated sorting machine which has a tendency to chew up letters with foreign objects attached to the outside of them. So be wary of that too.

According to one time Post Office mail facility manager Fran Eagle, the usual process when dealing with letters with coins and the like attached is to remove the money and replace it with a stamp before simply feeding it back into the sorting machine to continue on its merry way like any other piece of mail. This can, however, potentially create a problem as, with some caveats, it is a federal crime to knowingly open someone else’s mail, something that can easily happen by accident when removing tape from a thin paper envelope. As such, some postal workers may be wary about trying to remove the change in some cases, even if it is the correct amount. In these cases, they may either send it back to you or to the Mail Recovery Center (more colloquially known as the Dead Letter Office). As we’ve discussed in our article on the subject, workers in the Mail Recovery Centre are incredibly committed to their jobs so there’s a good chance the letter will probably still get delivered even if this happens.

Moving on, it turns out that the United States Postal Service has a number of obscure rules related to mail and postage that vary in accordance with geography. For example, if you live well outside a major city and far from any suburb or the like, your mail will in all likelihood be handled by a rural letter carrier. Due to the nature of their work, rural letter carriers are granted a host of perks not enjoyed by traditional mail carriers. These include the ability to wear their own chosen clothing and drive their own vehicle if they so wish. More relevant to the topic at hand, beyond the perks, they also are empowered to function as a sort of mobile post office.

For example, if you’d like to buy stamps, just wait at your mailbox for the rural mail person to arrive or leave appropriate funds in the mailbox with a note of what it is for and they’ll generally happily sell you some. They can also process Express Mail and Priority Mail or do what’s needed to help you mail a package (even with insurance), sell you a money order, and process certified or registered mail, all essentially the same way postal workers would do it if you actually went to the post office.

As you might have guessed from all this, if you simply leave the required money for postage for a piece of mail in your mailbox, perhaps in a separate envelope papercliped to an envelope or Priority Mail item you wish to mail with instructions on what the money is for, they should happily process that for you the same as if you’d gone to the post office to have it done. And, in this case, if you leave extra money for a book of stamps, they should leave that too.

The idea here being that people that live out away from more populated regions often have to drive a long way to get to the post office, so they simply empower their rural carriers to do many of these tasks right at your mailbox.

Finally, at this point you might be wondering how often people actually send mail with money, instead of postage, attached. It turns out not very often relative to the number of letters processed daily. According to USPS, they process approximately 187 million pieces of first class mail every day, of which, only a couple dozen items per day have money, instead of stamps, attached.