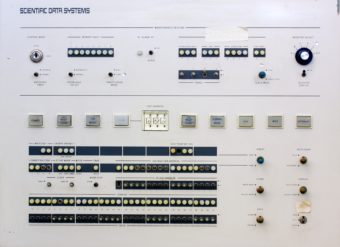 Did you know that although tin cans were invented in the 1810, the can opener wasn’t invented until 1855? If you’re reading this on an iPad or a Kindle, you may be surprised to learn that e-books have a similar history—they predate e-book readers by more than 30 years.

Michael Hart was a college freshman at the University of Illinois at Urbana-Champaign in the summer of 1971. He was a lifelong tinkerer, the kind of person who even as a seven-year-old had been skilled enough to take apart his parents’ TVs and radios to see how they worked…and then put them back together again.

That summer, two college friends managed to get him an account on a machine that was more complicated than anything he’d ever tinkered with before: a Xerox Sigma V mainframe computer, part of the university’s Materials Research Lab. It was unlike most computers of the era in that instead of being an island unto itself, it was linked to about 100 other university and military computers around the country. They were part of a network called ARPANET (Advanced Research Projects Agency Network), the predecessor of the Internet.

Hart got his first chance to try the mainframe on July 4 of that year. Most users spent their computer time writing programs, but Hart was so awestruck by the opportunity that for once he decided not to tinker. Reason: He figured any program he wrote would soon be obsolete, and he wanted to create something more enduring. But what?

He got his answer when he reached into his backpack for something to eat. Beside the snacks, inside his bag was a commemorative copy of the Declaration of Independence, something his supermarket was giving away as a Fourth of July promotion. “I had a ‘lightbulb moment,’ ” he recounted in a 2002 interview. “I thought for a while to see if I could figure out anything I could do with the computer that would be more important than typing in the Declaration of Independence, something that would still be there 100 years later—but I couldn’t come up with anything.” So he typed the entire document, all 1,458 words of it, into the mainframe by hand.

For anyone who wasn’t a computer programmer in the early 1970s, it might be difficult to understand just how primitive even state-of-the-art supercomputers were in those days. The Xerox Sigma V mainframe cost $300,000 (for that you got a 3 megabyte hard drive) and filled an entire room. But it didn’t have a computer screen or a keyboard. Hart had to do his typing on another machine—called a teletype—which was developed to send typewritten messages across telegraph lines, so that telegraph operators wouldn’t have to learn Morse code. The teletype machine converted the text into computer code by punching holes into a paper ribbon, which Hart then fed into the mainframe. AND BECAUSE COMPUTERS IN THOSE DAYS WEREN’T SOPHISTICATED ENOUGH TO RECOGNIZE LOWERCASE LETTERS, HART HAD TO TYPE THE ENTIRE DECLARATION OF INDEPENDENCE IN UPPERCASE LETTERS.

When he was finished, the document was 5 kilobytes big (about a sixth the size of a one-page blank document created in Microsoft Word today). He planned to send a copy to every user in the network, but a colleague warned him that sending a document that large would crash the entire ARPANET. So Hart posted a notice letting the other users know where his electronic version of the Declaration of Independence (or “e-book,” as he called it) was stored in the system, in case anyone wanted to access it. Six users did.

It had taken quite a bit of work to type the Declaration of Independence into the mainframe, but once the work was done, Hart figured that his e-book version would remain available for decades, perhaps even centuries, to come. It was entered using a simple code called ASCII (American Standard Code for Information Interchange), which could be understood by more than 99 percent of all computers, even in 1971. Nearly half a century later, ASCII files can still be read by more than 99 percent of all computers, making ASCII more compatible than any other coding system ever created. Far from being obsolete, Hart’s original e-book of the Declaration of Independence is as readable by modern computers as it was by old computers, THOUGH IT HAS SINCE BEEN RETYPED IN UPPER- AND LOWERCASE LETTERS TO MAKE IT EASIER TO READ.

Why stop with just one e-book? In 1972, Hart typed up an e-book version of the Bill of Rights. For 1973, he typed the rest of the U.S. Constitution. In 1974, he began working on the various books of the King James Bible, each of which was small enough to fit on a standard floppy disk. Hart stuck to texts that were of historical interest and small enough to fit on a single floppy disk, not only because they were easier to type, but also because in those days one of the only ways to transfer files between computer users was by sending floppy disks through the mail. Hart’s e-books became documents in what he named “Project Gutenberg,” after Johannes Gutenberg, the German printer who invented the first practical movable-type printing press in the 1450s. Gutenberg’s press had sparked a revolution in learning by lowering the cost of books to a level that ordinary people could afford. Hart hoped to accomplish a similar task with Project Gutenberg. He wanted people to be able to obtain important books for little or no cost at all.

That was how Project Gutenberg progressed for nearly 20 years: Michael Hart sitting alone at a keyboard, manually entering the text of one e-book after another in his spare time. John F. Kennedy’s 1961 inaugural address was e-book #3, the Gettysburg address was #4. It took him until 1989 to enter all the books of the King James Bible (which together made up e-book #10, released in August of that year).

Alice’s Adventures in Wonderland was #11. Released in January 1991, it was Project Gutenberg’s most popular e-book because it was an actual work of literature that people wanted to read, not just an important historical document. The popularity of Alice’s Adventures in Wonderland, Hart later said, caused “the light to go on in my head,” and he started to include more works of literature in his Project Gutenberg selections. All of the titles he selected had one thing in common: they were all in the public domain, which meant that they were old enough that their copyrights had expired. Had they not been in the public domain, it would have been illegal for Hart to make and distribute copies without permission from the authors or their publishers.

Given the slow pace of progress after 18 years of effort, hardly anyone other than Hart himself could have imagined that his project would ever amount to much. One person who did come to believe in the project was Father David Turner, the chaplain at the University of Illinois. Turner, a Benedictine monk, talked Illinois Benedictine College into appointing Hart to the position of adjunct professor at the college and paying him a $1,000-a-month stipend for several years. That gave Hart money that he could use on the project, and professional clout that helped him raise additional funds from other donors. The University of Illinois also supplied him with a free Internet account.

Technological developments in the late 1980s also helped to pick up the pace. Improvements in document scanners and optical character recognition (OCR) software made it possible to scan the books into computers page by page, instead of having to type the words manually. And the growing popularity of the World Wide Web in the mid-1990s made it possible for Hart to recruit volunteers in growing numbers. It had taken him 18 years to create Project Gutenberg’s first ten e-books himself, but by 1991 he was able to set a goal of adding one new e-book to the collection every month, and to double the rate of production every year for the next several years. He was able to achieve both goals. Project Gutenberg added books at a rate of two books per month in 1992, four per month in 1993, and eight per month in 1994. That year, Project Gutenberg became self-funding for the first time, collecting enough money in donations to cover all of its operating costs. By then, Hart estimated, he had spent about $100,000 of his own money on the project.

The year 2000 marked another development—one that helped speed Project Gutenberg’s growth even more. Late that year, a fan named Charles Franks launched a website called Distributed Proofreaders. That website allowed multiple visitors to proofread scanned e-book pages at the same time, reducing the amount of time it took to prepare a draft for final publication. Result: production of e-books soared, and by 2004 Project Gutenberg was adding 338 titles a month, or more than ten new titles every day. And the majority of these titles were produced with the assistance of the volunteers on the Distributed Proofreaders website.

One of Michael Hart’s goals for Project Gutenberg was that it be able to continue to operate after he was no longer around to run it. He died from a heart attack in September 2011 at the age of 64. But just as he’d hoped, Project Gutenberg is still chugging along: Today more than 50,000 e-books are available for anyone to download, free of charge, including titles in all the major European languages as well as Chinese, Sanskrit, ancient Hebrew, Maori, and even Esperanto. For nearly two decades, Project Gutenberg was little more than one man’s pipe dream, but today it’s hard to imagine the Internet without it. As of 2015, Project Gutenberg’s mission is to produce ten million e-books in each of 100 different languages—a billion e-books in all. Given the success they’ve already had, it’s hard to imagine they won’t eventually get there, perhaps a lot sooner than anyone thinks.