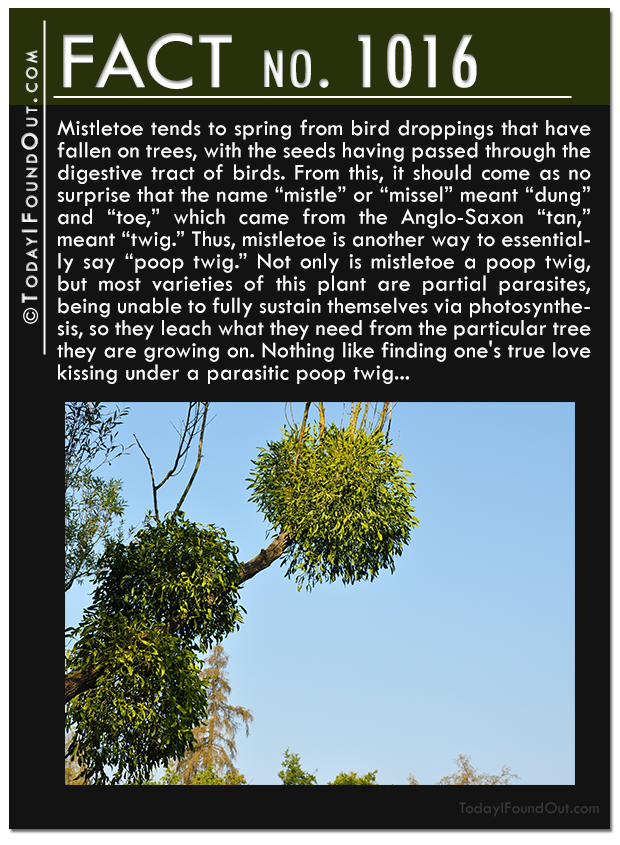 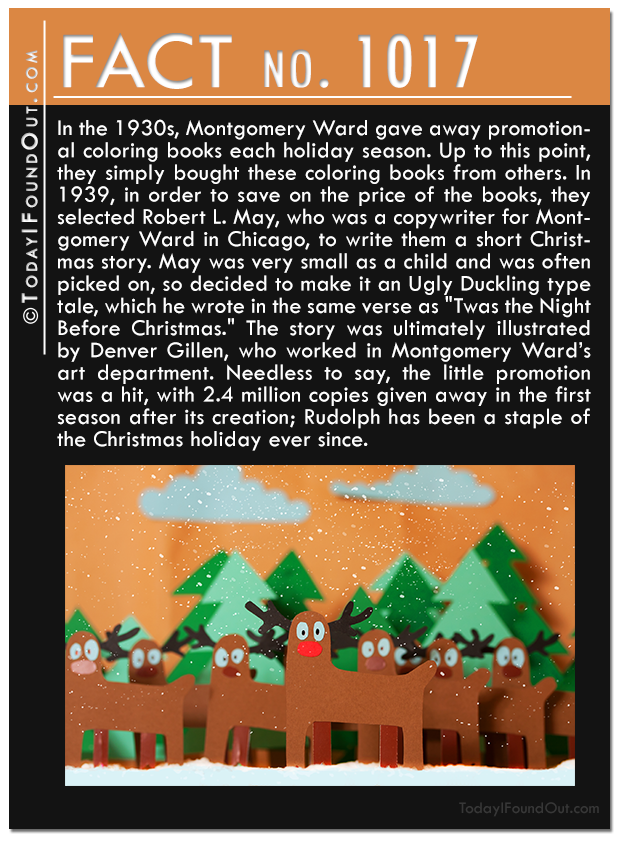 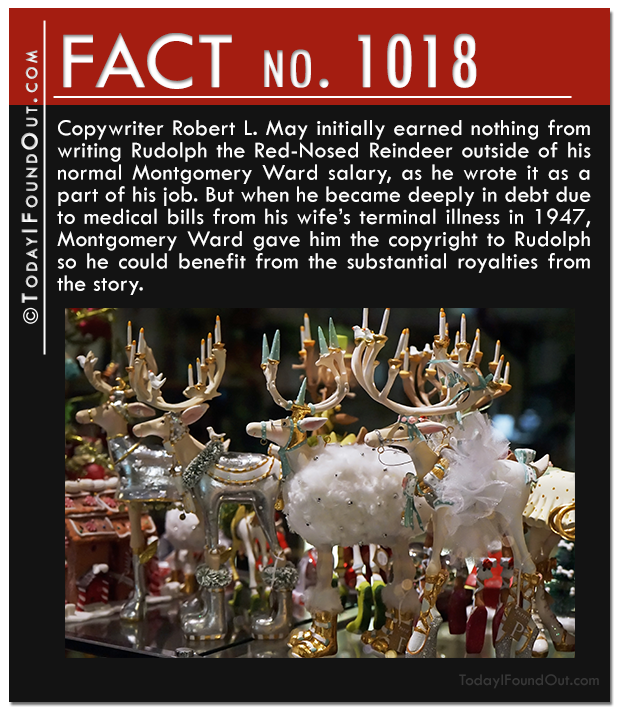 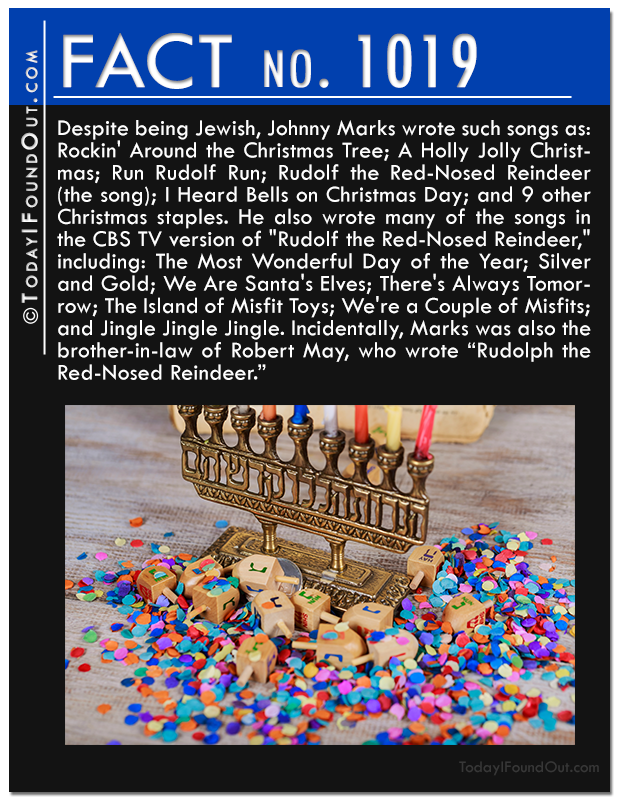 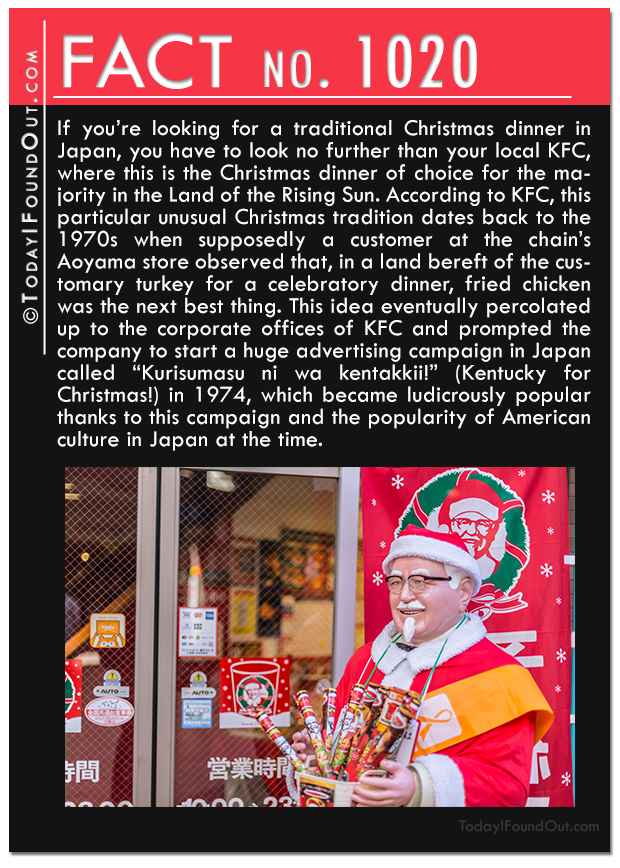 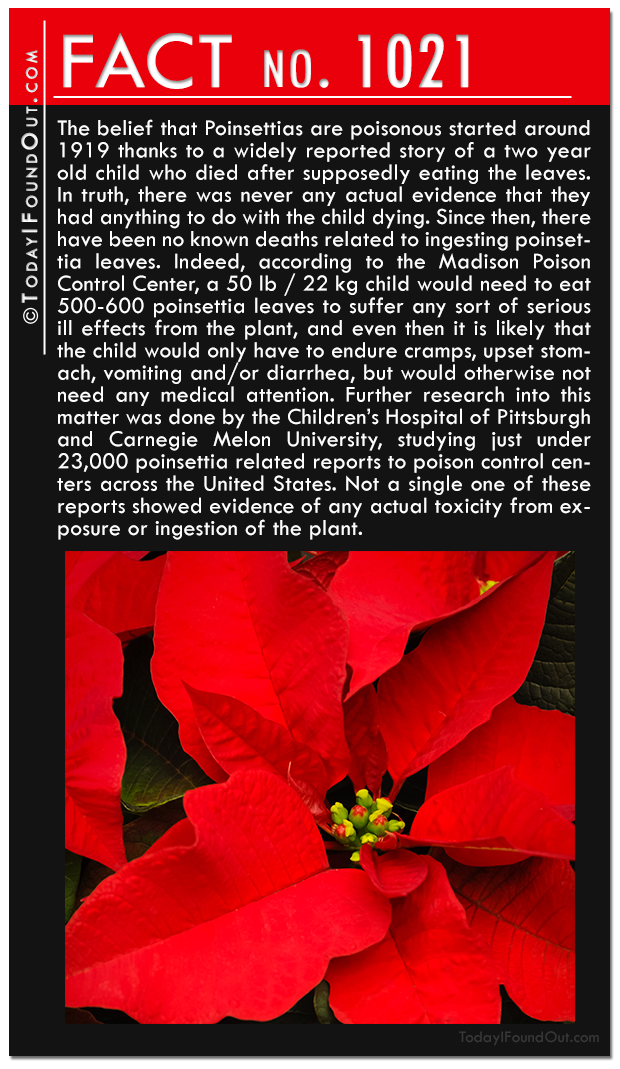 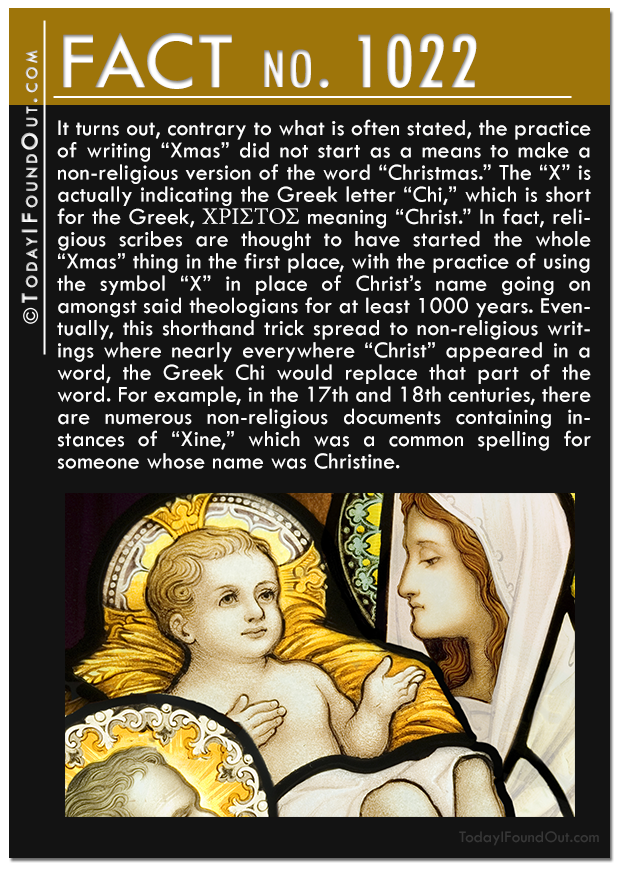 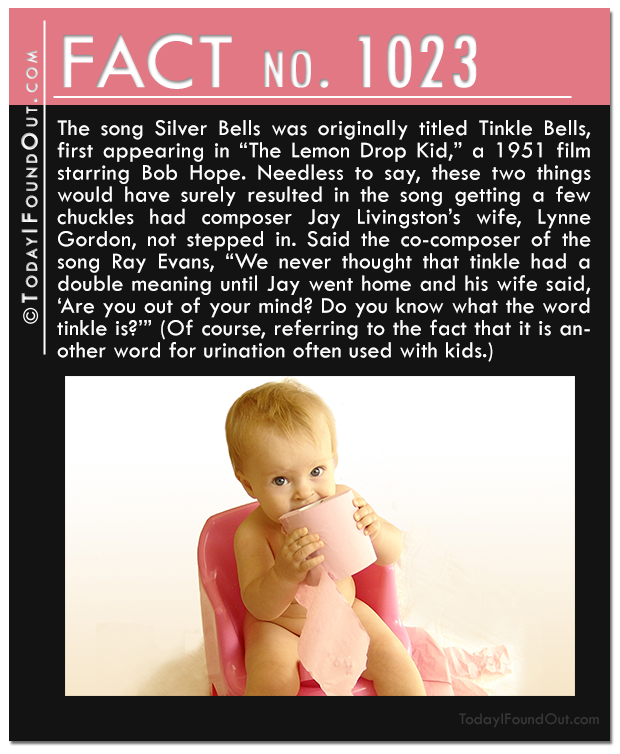 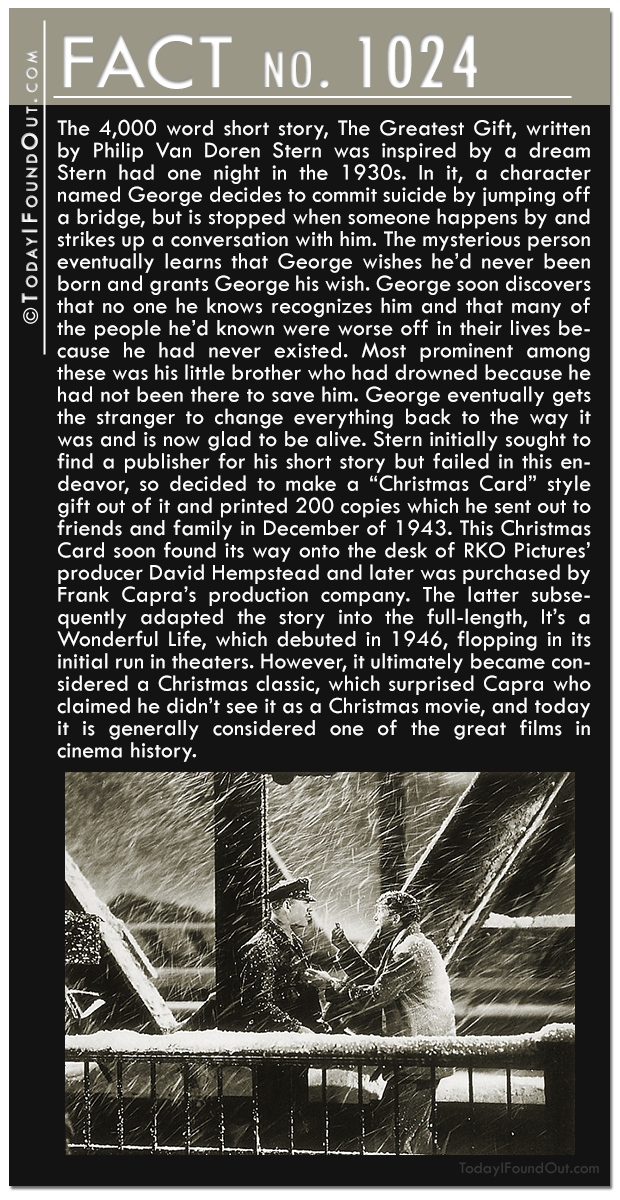 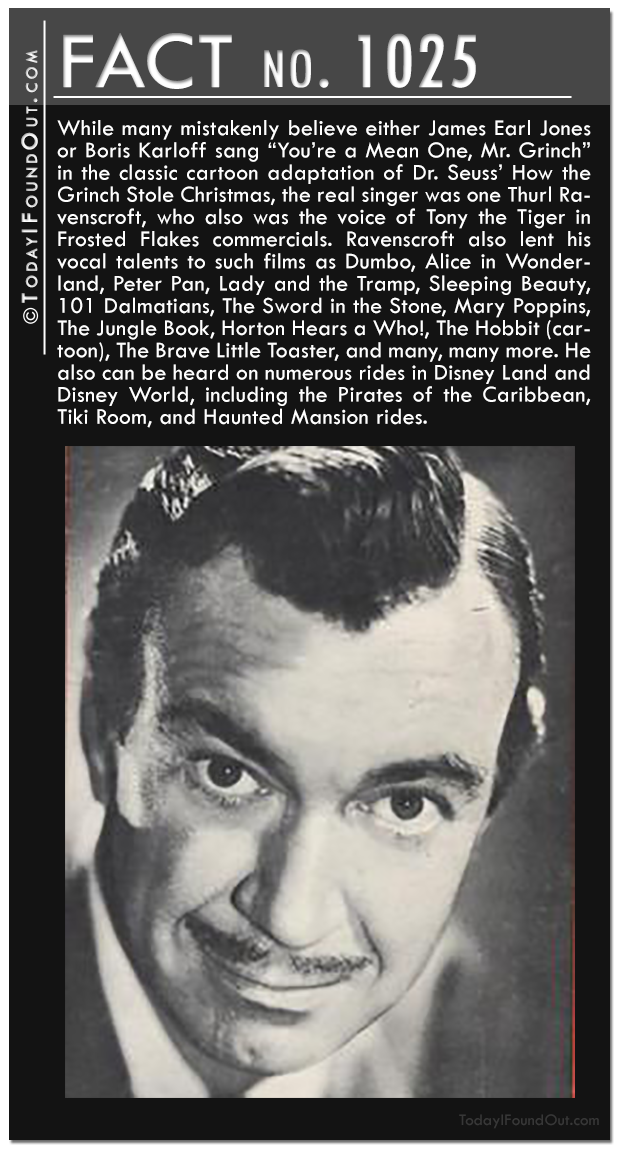 1016: Mistletoe tends to spring from bird droppings that have fallen on trees, with the seeds having passed through the digestive tract of birds. From this, it should come as no surprise that the name “mistle” or “missel” meant “dung” and “toe,” which came from the Anglo-Saxon “tan,” meant “twig.” Thus, mistletoe is another way to essentially say “poop twig.” Not only is mistletoe a poop twig, but most varieties of this plant are partial parasites, being unable to fully sustain themselves via photosynthesis, so they leach what they need from the particular tree they are growing on. Nothing like finding one’s true love kissing under a parasitic poop twig…

1017: In the 1930s, Montgomery Ward gave away promotional coloring books each holiday season. Up to this point, they simply bought these coloring books from others. In 1939, in order to save on the price of the books, they selected Robert L. May, who was a copywriter for Montgomery Ward in Chicago, to write them a short Christmas story. May was very small as a child and was often picked on, so decided to make it an Ugly Duckling type tale, which he wrote in the same verse as “Twas the Night Before Christmas.” The story was ultimately illustrated by Denver Gillen, who worked in Montgomery Ward’s art department. Needless to say, the little promotion was a hit, with 2.4 million copies given away in the first season after its creation; Rudolph has been a staple of the Christmas holiday ever since.

1018: Copywriter Robert L. May initially earned nothing from writing Rudolph the Red-Nosed Reindeer outside of his normal Montgomery Ward salary, as he wrote it as a part of his job. But when he became deeply in debt due to medical bills from his wife’s terminal illness in 1947, Montgomery Ward gave him the copyright to Rudolph so he could benefit from the substantial royalties from the story.

1020: If you’re looking for a traditional Christmas dinner in Japan, you have to look no further than your local KFC, where this is the Christmas dinner of choice for the majority in the Land of the Rising Sun. According to KFC, this particular unusual Christmas tradition dates back to the 1970s when supposedly a customer at the chain’s Aoyama store observed that, in a land bereft of the customary turkey for a celebratory dinner, fried chicken was the next best thing. This idea eventually percolated up to the corporate offices of KFC and prompted the company to start a huge advertising campaign in Japan called “Kurisumasu ni wa kentakkii!” (Kentucky for Christmas!) in 1974, which became ludicrously popular thanks to this campaign and the popularity of American culture in Japan at the time.

1021: The belief that Poinsettias are poisonous started around 1919 thanks to a widely reported story of a two year old child who died after supposedly eating the leaves. In truth, there was never any actual evidence that they had anything to do with the child dying. Since then, there have been no known deaths related to ingesting poinsettia leaves. Indeed, according to the Madison Poison Control Center, a 50 lb / 22 kg child would need to eat 500-600 poinsettia leaves to suffer any sort of serious ill effects from the plant, and even then it is likely that the child would only have to endure cramps, upset stomach, vomiting and/or diarrhea, but would otherwise not need any medical attention. Further research into this matter was done by the Children’s Hospital of Pittsburgh and Carnegie Melon University, studying just under 23,000 poinsettia related reports to poison control centers across the United States. Not a single one of these reports showed evidence of any actual toxicity from exposure or ingestion of the plant.

1022: It turns out, contrary to what is often stated, the practice of writing “Xmas” did not start as a means to make a non-religious version of the word “Christmas.” The “X” is actually indicating the Greek letter “Chi,” which is short for the Greek, ΧΡΙΣΤΟΣ meaning “Christ.” In fact, religious scribes are thought to have started the whole “Xmas” thing in the first place, with the practice of using the symbol “X” in place of Christ’s name going on amongst said theologians for at least 1000 years. Eventually, this shorthand trick spread to non-religious writings where nearly everywhere “Christ” appeared in a word, the Greek Chi would replace that part of the word. For example, in the 17th and 18th centuries, there are numerous non-religious documents containing instances of “Xine,” which was a common spelling for someone whose name was Christine.

1023: The song Silver Bells was originally titled Tinkle Bells, first appearing in “The Lemon Drop Kid,” a 1951 film starring Bob Hope. Needless to say, these two things would have surely resulted in the song getting a few chuckles had composer Jay Livingston’s wife, Lynne Gordon, not stepped in. Said the co-composer of the song Ray Evans, “We never thought that tinkle had a double meaning until Jay went home and his wife said, ‘Are you out of your mind? Do you know what the word tinkle is?’” (Of course, referring to the fact that it is another word for urination often used with kids.)

1024: The 4,000 word short story, The Greatest Gift, written by Philip Van Doren Stern was inspired by a dream Stern had one night in the 1930s. In it, a character named George decides to commit suicide by jumping off a bridge, but is stopped when someone happens by and strikes up a conversation with him. The mysterious person eventually learns that George wishes he’d never been born and grants George his wish. George soon discovers that no one he knows recognizes him and that many of the people he’d known were worse off in their lives because he had never existed. Most prominent among these was his little brother who had drowned because he had not been there to save him. George eventually gets the stranger to change everything back to the way it was and is now glad to be alive. Stern initially sought to find a publisher for his short story but failed in this endeavor, so decided to make a “Christmas Card” style gift out of it and printed 200 copies which he sent out to friends and family in December of 1943. This Christmas Card soon found its way onto the desk of RKO Pictures’ producer David Hempstead and later was purchased by Frank Capra’s production company. The latter subsequently adapted the story into the full-length, It’s a Wonderful Life, which debuted in 1946, flopping in its initial run in theaters. However, it ultimately became considered a Christmas classic, which surprised Capra who claimed he didn’t see it as a Christmas movie, and today it is generally considered one of the great films in cinema history.

1025: While many mistakenly believe either James Earl Jones or Boris Karloff sang “You’re a Mean One, Mr. Grinch” in the classic cartoon adaptation of Dr. Seuss’ How the Grinch Stole Christmas, the real singer was one Thurl Ravenscroft, who also was the voice of Tony the Tiger in Frosted Flakes commercials. Ravenscroft also lent his vocal talents to such films as Dumbo, Alice in Wonderland, Peter Pan, Lady and the Tramp, Sleeping Beauty, 101 Dalmatians, The Sword in the Stone, Mary Poppins, The Jungle Book, Horton Hears a Who!, The Hobbit (cartoon), The Brave Little Toaster, and many, many more. He also can be heard on numerous rides in Disney Land and Disney World, including the Pirates of the Caribbean, Tiki Room, and Haunted Mansion rides.