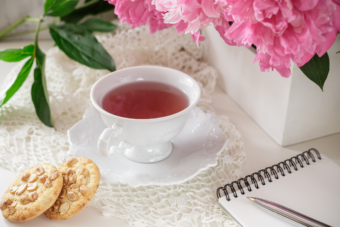 According to George Orwell, “tea is one of the main stays of civilization,” and like many of his countrymen, Orwell had rather strong opinions on the proper method of its preparation. Realizing one day in 1946 that the cookbooks of the age gave scant instruction in how to make tea, he decided to remedy that deficiency and published his personal tea making regime in the Evening Standard in January of that year.  The title of the article was, fittingly, “A Nice Cup of Tea”.

Comprised of “eleven outstanding points,” in which Orwell notes only two are probably without controversy, they are, in order:

1) Only use tea from India or Sri Lanka: Per Orwell “there is not much stimulation,” in cheaper teas. He further states that Chinese tea is otherwise fine, but “one does not feel wiser, braver or more optimistic after drinking it.”

2) Make tea in a china or earthenware teapot and only in small quantities: Tea made in anything larger than a small teapot and prepared in pots made of metal (excepting pewter) or containing an enamel coating, in Orwell’s opinion, produces poor tasting tea.

3) Warm the teapot beforehand: Towards this end, Orwell recommended placing it on “the hob” which was an area at the back of the stove. He felt that swilling hot water in the pot to warm it produced inferior results.

If you’re now wondering why people warm the teapot before making tea, there are two primary reasons, one practical in some cases and the other concerning taste. As to the former, the practice of pre-warming the teapot seemingly started in part as a way to ensure you didn’t break the china or earthenware by pouring boiling water into a cold container. Obviously today, this isn’t typically going to be a problem due to both higher quality manufacturing and that that average temperature inside a home is often kept much higher during cold times of year than the days of yore; so the temperature difference isn’t quite as stark.

On that note, rather than just use warm water or the like to avoid potential breakage, it’s common today for people to simply pour boiling water into the teapot, let it warm the pot, then dump it out, put the tea in, and pour a second batch of boiling water in.

As to the second reason people often pre-warm their teapot, tea enthusiasts usually argue that it improves the flavor, particularly of black teas, by keeping the boiled water hotter, longer, thus effecting how the tea steeps.

Of course, as with pretty much everything to do with tea, you’ll find people arguing on every side, with, for instance, many feeling that pre-warming the teapot hurts the flavor of lighter teas. Others argue it actually makes no difference, regardless of what type of tea it makes and it’s just all in people’s heads. Still others think even black teas taste better with the water quickly cooled a bit from boiling temperature via having to warm up the teapot too while the tea steeps.

4) Make your tea strong: On this point, Orwell was adamant, even though at the time Britain had been rationing tea to only 2 ounces of loose tea per person per week. How strong did he like it?  About six heaping teaspoons worth for a one quart pot. While how much heaping is done will vary how much this actually is, following Orwell’s advice would have meant people would be using the majority of their entire week’s ration on a single one quart pot of tea.  With regards to the issue, Orwell felt that “one strong cup of tea is better than twenty weak ones.” He also claimed that each year, true tea lovers almost always continued to increase the strength of their tea from what they steeped the year before.

5) Tea should steep loose: Orwell believed that any restriction on the free flow of tea leaves in the teapot, even those “dangling baskets under the spout,” prevents the tea from infusing properly. He also notes people shouldn’t be concerned with swallowing tea leaves as one can do so in “considerable quantities without ill effect.”

6) The water should be boiling when it hits the pot: So strongly did Orwell believe this that he instructed the water should be poured into the teapot at the stove while the kettle remained held over the flame for the duration of the pouring. He also notes on this one that, contrary to popular opinion, he didn’t feel it made any difference whether one poured the water just as it started to boil or waited, something many a tea aficionado would argue with him about. On this one, we can actually ring in that Orwell seems to be correct given the data available, which is discussed at length in our article Why are You Not Supposed to Drink Twice Boiled Tea?

7) Shake the teapot or stir the tea and then allow the leaves to settle. This allows for further helping infuse the water with the tea.

8) Use a larger cup instead of a shallow teacup: He’s arguing on this one that the taller mugs hold a lot more tea, ensuring the tea stays hotter, longer. In his opinion, small, shallow teacups just result in “one’s tea [becoming] half cold before one has well started on it.”

9) Cream ruins the taste of tea: British tea is usually served with milk, and in the 1940s, milk was sold with the cream still at the top, so Orwell felt compelled to tell his readers to pour the cream off before adding the milk to the tea. He felt “Milk that is too creamy always gives tea a sickly taste.” He might have felt less strongly about this one if he didn’t have the next rule.

10) Pour tea first and add milk second: This is arguably the most contentious point of all, as Orwell himself notes.  For the curious, science (and yes there have been studies done on this) says that milk should be added first because, if you don’t, the hot water “causes the milk to heat unevenly” which “causes the proteins in it to denature, meaning they lose their structure and clump,” which does indeed change the taste.  This same level of denaturing does not appear to happen when the milk is put in first and the tea second.

Of course, whether this clumping affects the tea positively or negatively in an individual’s opinion is relative.

It should also be noted here that there was a time when adding the milk first was sometimes essential for quickly cooling the boiled water, again going back to the inherent problem with pouring boiling water into cold, poorly made earthenware causing it to crack.  This has long since not been a problem in all but the most delicate of chinas, but was once a consideration in whether to add milk first or second.

In fact, for a time it was something of a status symbol to be able to add milk second as it proved your dishware was of particularly high quality. This perception was such that famed British author Evelyn Waugh noted he had a wealthy friend who used the obscure expression “rather milk-in-first” to refer to poor people.

Another just as obscure variant of this, at least as far as known documented instances that have survived to today is “milk in first and Indian.” As far as we can find, this first appears in the 1962 A Murder of Quality by John le Carré and is stated again in the 2015 biography of said author written by Adam Sisman. It would seem from the biography that le Carré did not invent the expression and instead first heard it from students while teaching in the noted “chief nurse of England’s statesmen” Eton College, with the meaning seeming to be that preparing tea with milk first and using Indian leaves was rather uncouth as far as the upper class students were concerned.

Whatever the case, Orwell notes that while “The milk-first school can bring forward some fairly strong arguments” in his opinion their method has a fatal flaw compared to the milk second crowd- “by putting the tea in first and stirring as one pours, one can exactly regulate the amount of milk whereas one is liable to put in too much milk if one does it the other way around.” This is particularly helpful when drinking some unfamiliar tea, or one in which the strength isn’t exactly known.

It should also be noted that, as alluded to, the practice of putting the milk in second may have influenced Orwell’s extreme dislike of cream in the milk added to tea. Adding the heavy-creamed milk second would have influenced the flavor even more than milk with the cream skimmed off, via the aforementioned denaturing and clumping of the fats in the milk.

11) Do not use sweeteners: The one caveat here is that if one brews tea in the Russian style, Orwell thought sweeteners were fine. Otherwise adding sugar was a no-no.

That said, Orwell recognized that he was in the minority regarding this, but felt that a sweetener disguised tea’s bitter taste, which he relished. According to George, “it would be equally reasonable to put in pepper or salt” as sugar, and he questioned “how can you call yourself a true tealover if you destroy the flavour of your tea by putting sugar in it?” Further, “If you sweeten it, you are no longer tasting the tea, you are merely tasting the sugar; you could make a very similar drink by dissolving sugar in plain hot water.”

He then goes on to challenge all the tea sweetening layabouts to forgo using sugar in their tea for a fortnight, noting for those who try it, “it is very unlikely that you will ever want to ruin your tea by sweetening it again.”