The Spirits of Lily Dale 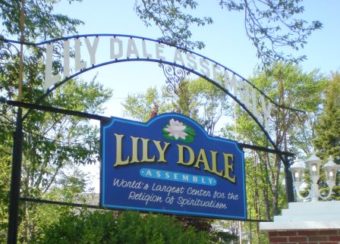 Since 1879, residents of a quaint town in upstate New York have mediated conversations between loved ones—parents and children, husbands and wives, brothers and sisters. What’s so special about that? These mediators connect the living…with the dead.

Pastel-painted Victorian homes line the streets of Lily Dale, New York, leftovers from the town’s golden age at the dawn of the 20th century. It’s been called Silly Dale, Spookdale, and—in a 1997 New York Times article—“New York’s own corner of the twilight zone.” In winter, Lily Dale is as quiet as the ghosts rumored to walk its streets. But when summer rolls around, this town’s population blossoms—from a few hundred to around 22,000.

This gated community, founded by members of the Spiritualist church beside a picturesque lake in western New York state, was set apart in its original corporate charter as a place “for the discerning of the spirits.” When tens of thousands of true believers stream through the gates each summer, it’s not the lake or the Victorian homes they’re coming to see: it’s the women (and a few men) who claim to be able to deliver messages from beyond the grave.

This particular Spiritualism got its start in 1848 in nearby Hydesville, New York, when unexplained rapping sounds in the night turned out to be the spirit of a peddler murdered and buried in the cellar of a farmhouse—or so the daughters of the house claimed. Fifteen-year-old Margaret Fox and her twelve-year-old sister, Kate, convinced thousands that communication between the dead and the living was possible. That belief started a movement—and then a “religion” called Spiritualism.

Spiritualists believe that death is simply “a transition from a physical entity into a nonphysical one.” In its heyday (the second half of the 19th century), Spiritualism had as many as 10 million followers. The movement included many of the era’s “free thinkers,” such as women’s rights advocate Elizabeth Cady Stanton, shipping magnate Cornelius Vanderbilt, writer Arthur Conan Doyle, newspaper publisher Horace Greeley, and even—some sources claim—Abraham Lincoln.

Early Spiritualists attended séances where mediums purported to deliver messages from the deceased to friends and family members. In the earliest days of the movement, mediums asked spirits to rap “yes” or “no” to answer questions. Later, they moved on to spelling out longer messages with a series of raps corresponding to the 26 letters of the alphabet. Disembodied voices spoke to those around the table, and voices might be “channeled” through the medium’s own lips. Haunting music sometimes flowed from ghostly trumpets that hung in the air. Lights floated across the room, glowing hands appeared, and flowers materialized, as if the dead were nearby, waiting to connect with the living.

If this all sounds foolish to modern ears, remember that the mid-1800s was a time of scientific marvels. If Samuel Morse could send “disembodied” messages with his telegraph consisting of nothing but electrical signals traveling over wires, why couldn’t disembodied spirits send messages through a “spiritual telegraph” such as Margaret Fox? Millions believed they could.

In 1849, a committee of skeptics—men of science, skilled at exposing fraud—conducted a battery of public “tests” at Corinthian Hall in Rochester, New York, in an attempt to expose Margaret Fox as a fraud. Fox was stripped naked by a group of “sour-faced women” in a back room. They checked her clothes for anything that might cause the raps that often accompanied her readings. Once reclothed, Fox made her way to the stage, where the male examiners tied her skirt tightly around her ankles. One of them held her feet to the floor so she couldn’t move them. Finally, a handkerchief was tied around her mouth.

Despite these preventive measures, when the audience posed questions, ghostly raps gave answers. Skeptics howled in protest, but believers were not dissuaded in the least.

Nineteenth-century American women were little more than second-class citizens, marginalized and silenced by their fathers and then by their husbands. From the beginning, Spiritualism gave these women something they’d never had before: voices in the public sphere. Female mediums delivered messages that would have been scandalous if they were voiced by women who were not in trances. From the safety of their “trances,” mediums made pronouncements about everything from social justice to sexuality: “Forcing women to have unwanted sex interferes with the evolution of the human race,” one medium revealed. “Men who force their wives to have sex risk the wrath of the spirit world.”

Messages from “the other side” played a role in the early women’s rights movement and advanced the causes of social justice, including the abolition of slavery. Spiritualists at a convention in Providence, Rhode Island, promoted “the abrogation of all oppression, civil inequality, domestic tyranny or mental or spiritual despotism, because freedom is the birthright of all, and the instinctive demand of every growing spirit.”

Female mediums of the time spoke with authority on almost any subject, from politics to science to economics. How did they get away with it? Women—as the “logical” men of the time maintained—could not possibly speak authoritatively due to an innate lack of intelligence. Therefore, they must be speaking for the dead.

THE PRICE OF BOOS

Messages from the dead aren’t free. In 1860, a 14-year-old medium named Tennessee Claflin could be consulted for $1. (For an extra $2, her father would throw in a bottle of Miss Tennessee’s Magnetic Life Elixir, a potent mix of alcohol and opium.) (You can read more about this fascinating young lady and her sister here: Equal Rights and Free Love- The Remarkable Story of the First Female U.S. Presidential Candidate) “The sad part about Spiritualism for me is that it used to be so easy—and still would be so easy—to fake,” says Susan Glasier, executive director of today’s Lily Dale Assembly.

Even Maggie, the elder of the famed Fox sisters whose ghostly raps gave rise to the religion, eventually recanted. The raps, she told the New York World in 1888, were faked by popping bones in her toes. Then she took off her shoes and popped away to prove it. Fox was broke at the time, and the World paid her $1,500 (about $40,000 today) for the exclusive interview.

But a 2012 Smithsonian magazine article reported that money wasn’t her only motivation. The leading Spiritualists of the day had called her little sister Kate a drunk. They were advocating for Kate’s two children to be taken from her. Margaret wasn’t going to let that happen to her little sister, and she would take down the whole religion to prevent it, if she had to. It worked. The press called Maggie’s admission a “death blow” to the movement, though it wasn’t the end of the Fox sisters’ story. A year after the World interview, Maggie recanted her recant and went back to working as a rapping medium. (Her spirit guides urged her to do so.)

TRY BEFORE YOU BUY

Lily Dale’s mediums claim the days of defrauding people for money are long past. The National Spiritualist Association of Churches (NSAC) calls Spiritualism “a science, a philosophy, and a religion.” On the “science” side, the church reviews data before deciding whether someone claiming the ability to contact the dead can actually do so. Mediums wanting to set up shop in Lily Dale have to prove themselves. They must give private readings to three of the corporation’s board members. If that goes well, they give public readings in front of the entire board. The board tests at least a dozen mediums every year, but only about 40 have passed the tests to become certified Lily Dale mediums.

A sign in the lobby of the town’s Maplewood Hotel reads: NO READINGS, HEALINGS, CIRCLES, OR SÉANCES IN THIS AREA, PLEASE. Not to worry. Anyone who wants to talk to spirits will find all of the above inside the town’s gates. Favorite first stop: the town’s “holiest” spot, Inspiration Stump. At one time, mediums stood on the stump to deliver the words of the dead. After one of them toppled over stone dead, the townspeople decided the stump’s energy was too strong and put a stop to stump speaking.

Public demonstrations of mediumship take place three times a day during the summer season. Those are included in the town’s $15 gate fee (free for active military and visitors age 80 and older). What ghostly messages do Lily Dale’s mediums reveal in public demos? One puzzled medium told a crowd that she was seeing images of Tootsie Rolls and Schlitz beer. “That’s my grandmother!” yelled a woman in the crowd. Visitors looking for one-on-one readings with Lily Dale mediums will pay between $40 and $75 for a half-hour session.

The NSAC calls Spiritualism a “common sense religion,” but today it’s just a ghost of its former self. Membership hovers somewhere around the 14,000 mark, rather than the millions it once boasted. Given that this is an age where satellites orbit the Earth and robots rove across Mars, the fact that Spiritualism thrives is somewhat surprising. Perhaps British writer G. K. Chesterton explained its endurance best: “No conceivable number of forged bank-notes can disprove the existence of the Bank of England.” By the same logic, Chesterton asserts, “No conceivable number of false mediums affects the probability of the existence of real mediums one way or the other.” As long as people knock on their doors, Lily Dale’s mediums will keep the tradition of mediating between the living and the dead…alive.