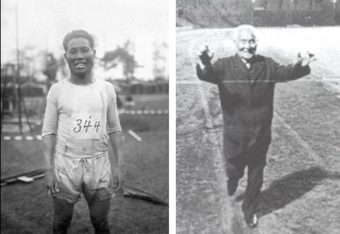 When it comes to Olympic level track and field events, history tends to only remember those who ran the fastest, jumped the farthest and pushed themselves further than their peers. Shizo Kanakuri is an apparent exception to that rule because he’s fondly remembered for having the worst official time of any Olympic marathon runner in history, taking over 54 years to finish a race he started in 1912.

Although mainly known in the west for his aforementioned Olympic record, in his native Japan, Kanakuri is regarded as one of the country’s finest athletes, often being referred to as “the father of the Japanese marathon”. In fact, Kanakuri was such an exceptional athlete that he entered the 1912 Olympics in Stockholm as a firm favourite to win the marathon after it emerged he’d set a possible world record in a qualifying round in Japan the previous year, achieving a time of 2:32:45. (Whether or not this was a true world record is debated as the distance Kanakuri ran was never officially measured and it’s believed by some that he only ran 25 miles instead of the requisite 26.2 for the record. Nevertheless, his long distance running ability was well known and established by the time the 1912 Olympics rolled around.)

The journey to Sweden was reportedly an incredibly trying and involved travelling by both boat and rail over the course of about two weeks. Not wanting their skills to slip, Kanakuri and his teammate reportedly kept themselves in shape by endlessly running laps around the boat, and later when they travelled by rail, jogging around the train station whenever it stopped.

Unfortunately, when Japan’s Olympic duo arrived in Sweden, one of the men fell ill, although it’s not clear from surviving records whether it was Kanakuri or Mishima. The local cuisine also didn’t sit well with Kanakuri, further hampering his pre-race preparation.

When the day of the Marathon arrived, the weather in Stockholm was an unseasonably warm 32 °C (almost 90 °F). Beyond the weather being less than ideal, Kanakuri chose to run in traditional Japanese cloth shoes called tabi. He did attempt to reinforce these shoes with rough canvas, but they still proved to be ineffective at protecting his feet from the gravel and debris strewn across the marathon’s path.

Another problem for Kanakuri was his, shall we say, unorthodox running method by modern standards. You see, while running, Kanakuri generally abstained from drinking liquid due to the then widespread belief that sweating made a person more fatigued. While this may seem strange, it was at least an improvement on other marathon running practices of both not drinking anything and taking small doses of strychnine…

In any event, the lack of drinking combined with the heat saw Kanakuri pass out from heatstroke around the halfway mark.

According to Kanakuri, around this time he happened upon a garden party being held in a well-to-do banker’s villa and decided to grab a drink with the host after spying that they were drinking orange juice. After about an hour of recovering, Kanakuri decided to forfeit the race and caught a train to Stockholm where he stayed in a hotel until his boat back to Japan arrived. Upon getting back to Japan, as thanks for allowing him to recover in their villa, Kanakuri sent the banker a mysterious box with a scroll inside covered in Japanese writing that became a treasured memento of the occasion for the family. (More on that in the bonus facts section).

Now Kanakuri’s choice to drop out of the race, in of itself, wasn’t unusual because over half of the 69 runners competing in the marathon that day ended up not finishing it because of the heat, with many similarly passing out like Kanakuri did. Not only that, but one man, Portuguese runner Francisco Lázaro, died as a result of the race, having fallen unconscious about 8 km from the finish line with a reported body temperature of a whopping 42.1 °C (107.8 °F).  He never regained consciousness and died the next morning. It was later revealed that he had covered his body with wax to help against sunburn. Unfortunately, it also prevented him from sweating properly, contributing to his death.

As for Kanakuri, ashamed that he had been forced to withdraw, he never told race officials he’d dropped out and instead simply went home. Thus, aware that many of the racers had passed out and one ultimately died, they worried that Kanakuri could be in danger and so reported that he was missing to the Swedish police who fruitlessly searched for him.

Weirdly, Kanakuri remained an official missing person in Sweden for about 5 decades, even though he competed in the 1920 Olympics in Antwerp and the 1924 Olympics in Paris (he was also set to run in the 1916 Olympics, but WW1 got in the way).

In his native Japan, Kanakuri’s failure in 1912 was roundly criticised by the media and Kanakuri himself wrote of how ashamed he was of himself in his diary. However, some coverage was more favourable, commending the young athlete for even being able to compete on the same level as the best in the world with so little preparation. (He was only 20 when he ran the marathon and had trained for less than a year).

Despite this initial setback, Kanakuri became a key figure in the history of long-distance running in Japan, establishing the Tokyo-Hakone Round-Trip College Ekiden Race, a relay race for university students that helped foster a longstanding love of the sport in the country and something that led to him being crowned “the father of Japanese marathon”. After retiring from the sport in 1924, Kanakuri became a geography teacher.

Kanakuri’s performance in the 1912 Olympics likely would have been forgotten if not for his absconding becoming something of an urban legend in Sweden, with him coming to be known as “the missing marathoner” in Stockholm.

In 1962, a Swedish journalist learned that Kanakuri was very much alive, much to the surprise of the Swedish National Olympic Committee who made a note of it in their records.

Five years later, in 1967, Kanakuri’s name came up among a group of businessmen who were helping raise funds to send Swedish athletes to the 1968 Olympics in Mexico.  They then hatched a novel idea- why not have Kanakuri “finish” the marathon in front of the world’s media as a way to score some free publicity and attract sponsors to their cause?

Worried Kankuri wouldn’t visit if he knew what was going on, he was invited to Sweden under the pretence of celebrating the 55th anniversary of the 1912 Olympic games- a curious request, but Kanakuri happily obliged regardless.

It was only when Kanakuri arrived in Sweden that officials informed him of the ruse and the extent of the legend he’d inspired by disappearing all those years ago (some tongue in cheek versions went as far to posit that Kanakuri was still running 50 years later because he’d missed the first checkpoint).

Taking the whole thing in good spirits, Kanakuri agreed to finish the race on camera, reportedly still having the athletic fortitude to sprint the final 100 meters at 76 years old.

Upon Swedish Olympic Committee representatives reading out his official finish time to the gathered press- 54 years, 8 months, 6 days, 5 hours, 32 minutes and 20.3 seconds- Kanakuri was asked if he’d like to say a few words about breaking a world record for slowest marathon ever run. Thinking for a moment, the elderly athlete shuffled to the microphone and said:

It was a long trip. Along the way, I got married, had six children and 10 grandchildren.

Kanakuri passed away in 1983 at the age of 92. In honor of his contribution to the sport of long distance running in Japan, the grand prize for the aforementioned relay he started was named after him.