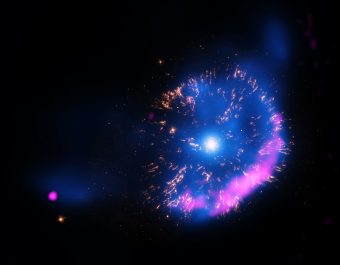 When PBS executives started planning a new science show in the early 1970s, people in the TV business were baffled. A show about…science? Were they crazy? Audiences wanted Happy Days and M*A*S*H*, not educational shows! Luckily for us, they were wrong.

In 1971 an American television producer named Michael Ambrosino was in London and happened to see some episodes of a science-based British TV show. Ambrosino worked at Boston’s legendary public television station WGBH, and he’d been there since 1956—just a year after it went on the air.

WGBH was a pioneer in the American public television business and by 1971 had produced several groundbreaking shows, including The French Chef (1963), the cooking show hosted by Julia Child; Evening at Pops (1970); and Masterpiece Theatre (1971). In 1970 the station had become part of the brand-new, government-backed Public Broadcasting Service (PBS), with new funding that allowed WGBH to begin thinking bigger. That’s why Ambrosino was in London: The 40-year-old was taking part in a yearlong fellowship program with the BBC—the British equivalent of PBS—to learn production techniques. There he observed the making of several episodes of Horizon, an educational science-based series that, to the surprise of BBC officials, was actually pretty popular with viewers.

Horizon was a groundbreaking series of its own, having proven that television shows based on scholarly subjects could make for riveting TV. First airing in 1964, and roughly twice a month since then, Horizon covered a wide array of subjects. The 1969–70 season alone featured episodes on the science of insanity, the psychological and physical effects of alcohol consumption, the history and science of bread, an examination of wolves (and werewolves), and the role of expert scientific witnesses in the courtroom. The format employed a narrator who spoke over footage taken mostly in the field, and regularly included appearances by some of the era’s leading thinkers, who spoke directly into the camera in a loose, informal setting. It was nothing like a dull classroom session—and audiences liked it.

BRINGING IT ALL BACK HOME

Ambrosino felt there was a disappointing lack of educational science programming in the U.S., and seeing the success of Horizon spurred him to do something about it. “Science is a part of our heritage, our present culture, and a major force in determining our future,” Ambrosino said in 1998. “Its absence from television, our most public medium of communication, spoke to the ignorance of its gatekeepers, who thought mostly in terms of news and the arts. Science, medicine, technology, engineering, architecture all impact our culture by determining how we live our lives. They also make for great story-telling.”

In May 1971, shortly before returning home to Boston, Ambrosino wrote a five-page letter to Michael Rice, vice president of WGBH, outlining in detail a science show for PBS. His idea: to air a series of shows on a wide variety of science-based subjects, just like Horizon. And, also like Horizon, WGBH wouldn’t make all of the shows themselves—they’d produce some of their own episodes, make others in collaboration with teams from around the world, especially at the BBC, and air already-finished pieces made entirely by other people. This approach solved several problems, not the least of which being that WGBH didn’t have the resources to make all the shows on their own, but also that it would broaden the show’s range of subjects, making them more international and encompassing, and hopefully, more interesting to the viewers. And it was also a good foundation on which to grow into the future.

NOVA TO THE GRINDSTONE

That was the vision Ambrosino laid out in his letter to Michael Rice in 1971…and Rice loved it. The letter has essentially remained the blueprint for NOVA ever since. But there was still a lot of work to do.

Ambrosino had done almost every job in television production during his years at WGBH—he’d been a writer, director, camera operator, set builder, and even hosted a documentary series (Michael Ambrosino’s Show)—but he’d never taken on a project quite like this before. So…he got to work. He read science books, watched science programs, met with scientists (including Jonas Salk, who discovered the polio vaccine), and attended science conferences. Not only did he try to fill his head full of science, he tried to learn what scientists thought about science, and, more important, what scientists thought the public would most benefit from in learning about science. This was important—because if Ambrosino could get scientists and national scientific organizations behind the show, it would be a lot easier to get the funding to support it.

EUREKA! (NO, NOT EUREKA)

As the pieces started falling into place, Ambrosino realized the new show needed a name—and a good one. He made a list of possible titles, circulated it to his staff and bosses, and they came up with more. (Two of the names: The Asymptotic Struggle and Eureka!) “I remember Ambrosino’s entire office door covered with colored three by five cards with lots of potential names for the series,” Ben Shedd, one of the show’s original filmmakers, said years later. But Ambrosino wasn’t happy with any of them. He stopped soliciting ideas and came up with his own title—NOVA.

“A nova,” he explained, “is a sudden, brilliant star in the firmament; so dazzlingly bright that it’s noticed and admired by all. It delights the eye and turns the mind to a joyful appreciation and questioning about the wonders of the universe.”

Ambrosino had hoped the show would air in 1972—but it took until mid-1973 to get enough funding to get the project off the ground. Just as Ambrosino had hoped, a major science foundation—the American Association for the Advancement of Science—got the ball rolling when they donated the first $40,000 to the project. Another early major donor: the Polaroid Corporation—which was founded and headquartered in Boston and had been a longtime supporter of WGBH.

Once funding was secure, hiring began. A lot of NOVA’s producers and assistant producers were hired away from the BBC (which didn’t make the folks at the BBC very happy), and for the rest of 1973, three separate production teams went to work, first on the road, then in the tiny WGBH studios, making the first episodes. Ambrosino, as executive producer, was involved in every aspect of the series except actually being in the field and running the cameras. He spent the next several months choosing episode subjects or reviewing and okaying those he didn’t pick himself, assisting in the editing process, all the while taking care of scheduling, budgeting, hiring, and all the other jobs that had to be done.

On March 4, 1974, NOVA made its debut with the tagline “Science adventures for curious grownups.” The first episode: “The Making of a Natural History Film”—a behind-the-scenes look at the techniques used by four nature documentary makers, which showed how filmmakers captured footage of wasps laying eggs in trees, the mating habits of the oft-studied stickleback fish, and the hatching of a chicken from an egg—all very high-tech back then. To get an idea of just how much the BBC’s Horizon influenced NOVA, “The Making of a Natural History Film” was a Horizon episode that had aired on the BBC in 1972.

THE SHOW MUST GO ON

The first original episode of NOVA aired just a week later. “Where Did the Colorado Go?” was an examination of the history of the management—and mismanagement—of the Colorado River in the American Southwest. The rest of that first season’s 13 episodes featured topics that included the world’s whaling industry (the antiwhaling movement was growing rapidly around this time), the ancient Anasazi people of the American Southwest, and the testing of new medications on humans—including children.

The response was immediate: People loved it. Member PBS stations in dozens of the country’s largest markets aired the show in prime time (mostly on Monday evenings), and the show received high marks from viewers and critics alike. NOVA, said Time magazine, was “filling the gap between deadly-dull ‘educational’ lecturing and pop-science trivia.” Variety added, “With its scope, NOVA should be good for seasons to come.”

NOVA THROUGH THE YEARS

Ambrosino was NOVA’s executive producer for its first three years on the air. He left the show in 1976, after the exhausting schedule finally got to him. (He was taking both Valium and sleeping pills by this time, he later admitted, to cope with the stress of the job.)

During those three years he had supervised the airing of 50 episodes of NOVA, 19 of them made by WGBH, the rest either collaborations or outside projects, including documentaries made in Switzerland, Sweden, Yugoslavia, and other countries. By the end of that third year, Ambrosino had helped establish NOVA as one of PBS’s most important and most-watched programs, garnering between four and seven million viewers for each episode. The show is now seen as one of the main reasons that the fledgling PBS network survived.